Bethlehem Central has a new auditorium 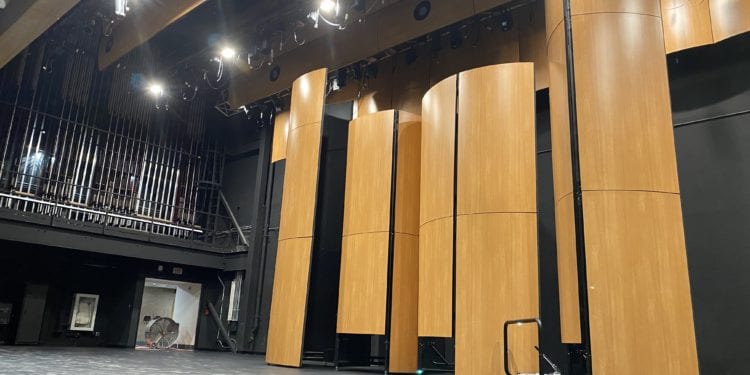 DELMAR — Work on Bethlehem Central High School’s $7.8 million auditorium is all but finished — you just can’t see it, thanks to COVID.

“We’re pretty much done with [the auditorium],” Bethlehem Central Superintendent Jody Monroe said. The auditorium is the “cornerstone project” for 111 separate projects districtwide funded by a $32.2 million bond voters approved in November 2016. “We started training with the new electronics that are in there.”

The superintendent’s bittersweet presentation allowed the district to peek at improvements envisioned four years ago. One picture revealed the middle school’s shiny new gymnasium floor, while another showed a brightly colored swimming area — only the water was missing from the pool. The current pandemic, however, makes it impossible for anyone to enjoy these new amenities.

Construction continues for several more projects that include the district’s business office, the high school’s front vestibule, the middle school pool, drainage and paving at the high school, and the high school’s Library Media Center. The outstanding work will be done after classroom hours, Monroe said.

The high school auditorium was once a trip back into the past for residents who returned to the school for student productions. It was original to the school, which dates back to 1952. Monroe’s latest picture of the theatre shows a sleek and modern room that resembles something out of the mind of modern artist Alexander Calder with asymmetric shapes hanging above the audience,

presumably designed to manage acoustics. The renovation reconfigured both the seating and stage footprint. The stage’s proscenium has expanded, and the seating has pushed back into the front foyer, enlarging the room’s seating capacity for future productions. Not revealed in the picture is a new sound and lighting system.

This is the first renovation project for the Library Media Center in nearly 25 years, which was first used in 1967 and later enlarged in 1996. it will now include more space for teaching and studying, a welcoming central seating area, makerspaces interactive classrooms, and a new entrance to the Information Technology Helpdesk.

Monroe said work will finish by the end of the year, allowing the district to take advantage of state aid previously promised toward the project.

A groovin’ good show at the Jericho

LETTER to the EDITOR: Remove Kelly from Hall of Fame