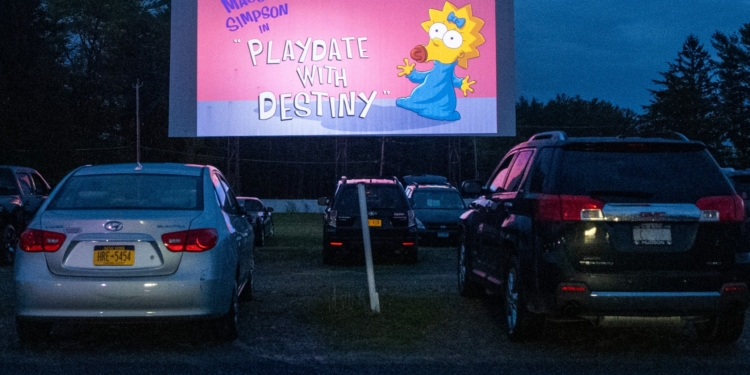 The Jericho Drive-In Theater in Glenmont experienced a large turnout during its May 15 reopening weekend but will continue to operate at 50 percent capacity to maintain social distancing. Jim Franco / Spotlight News

Capital District drive-in theater owners are happy they can finally reopen this week, operating at 50 percent capacity, ensuring their employees wear masks, and some have scheduled to hold graduation ceremonies in June.

In Glenmont, the Jericho Drive-In reopened on Friday, May 15. “It went really well and we even sold out on Saturday,” said its co-owner Lisa Chenette. “We’re really thankful of the community, town and customers’ support. We wouldn’t be able to do it without our employees too who are the best ever.”

For now, Jericho will be open on Friday and Saturday nights and mostly uses an online ticket and concessions sales system at jerichodrivein.square.site. Chenette said if a movie night is not sold out and someone happens to drive up to the box office, they may purchase tickets via credit, not cash. Once parked inside, a patron can order food and drinks online and they will be notified when the order is ready for pickup.

Only one person from every vehicle should leave their parked vehicle to pick up their orders and is required to wear masks when outside. Patrons must watch the movie from their vehicle, with no chairs or blankets outside allowed. Up to two people can use the restrooms simultaneously, with hand sanitizers available outside.

The Malta Drive-In Theater, co-owned by Ed Caro, reopened on Friday, May 22. “I’m glad and I’m anxious about getting it done right,” Caro said. “It’s also great we pretty much have all our employees come back from last year and we’re dedicated to making this work safely so that we can stay open.”

Caro said it will be open on Fridays and weekends at least through the end of June and he is working on an online ticket sales system. For now, patrons are strongly encouraged to use contactless payments like credit cards at the box office and if the movie night is sold out, employees would go out to the line of cars and inform them, something Caro said has been done before.

Caro added that the online concessions system is being finalized; it will allow patrons to order from their smartphones, get texts about their ready orders and they, wearing masks, will go to the walk-up snack bar window. A limited number of patrons will be allowed into the concessions building too where a clear shower curtain-like barrier will separate patrons and employees, with three square windows to receive their orders.

“It’s all new to us and some people just don’t know how to use technology at all so that’s why we’ll allow a handful of people through the concession line inside,” Caro said. For more information, visit www.maltadrivein.com.

In Averill Park, the Hollywood Drive-In also reopened on Friday, May 22 and owner Frank Fisher said it will be open every night for at least its first week back.

“We usually open on the first week of April so we were getting nervous about when we could reopen this year,” Fisher said. “We’re excited now.”

Unlike Jericho and Malta, Hollywood has no plans for an online ticket sales system. “We found that online ticketing creates its own set of problems like how it can’t reserve spaces and if someone comes late to the drive-in, they’re late,” he said. “We decided to stay old fashioned and people can just drive up to the box office and pay by credit or cash. But all employees will wear masks and gloves.”

A restroom is sanitized after one person uses it and patrons must wear masks when leaving their vehicles. For concessions, a maximum of 10 patrons at a time can line up to order at a designated window and then walk to another window to pick their orders.

Fisher, however, said he declined to host graduation ceremonies at the Hollywood Drive-In because of crowding concerns, not enough restrooms, and its technological limitations like the inability to connect thumb drives and CDs to the sound system to project videos onto the screen.

“We’ve had about 30 schools reach out to us and I had to say no,” he said. “I tried to work around it but we don’t have the capability to do it.”

At Jericho, Chenette said 11 schools have scheduled ceremonies but since most have not announced them yet, she only revealed that the Averill Park school district’s will be on June 27. Holding graduation ceremonies is personal to Chenette who said her son is an Averill Park senior and did not want him to miss out on an important rite of passage.

“We have a stage rented and any school district could use it for seniors to cross it one at a time and 10 feet apart,” Chenette said. “It’s up to each school district as to what they want.”

She added that schools are still planning how to best execute their ceremonies so details are being finalized. “I’m basically closing the theater too to allow the high school students to graduate,” she said.

At Malta, while a few tentative ceremonies have yet to be set, the confirmed schools and districts so far are Waldorf School of Saratoga Springs (June 8), Burnt Hills-Ballston Lake (June 22), Saratoga Springs City (June 23 and 24) and Niskayuna (June 25).

“In some ways, I wish they could have their normal ceremonies but we’re glad to help in some way,” Caro said.