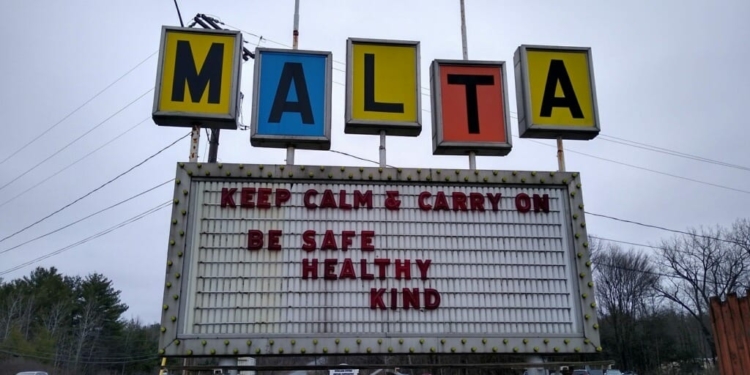 Ed Caro, who owns the Malta Drive-In Theater, revealed that eight local schools have reached out to him about possibly holding graduation ceremonies on its premises. But as of Sunday, May 3, these plans are not confirmed yet. Provided photo

Editor’s note: The original online and print versions of this story included an error that the Jericho Drive-In Theater is 25 years old. The online version has since been corrected to report that it is 63 years old as it has existed since 1957.

Although Capital District drive-in theaters remain closed amid COVID-19, a few owners found creative ways to operate them so far and feel prepared if they can reopen.

Married couple Mike and Lisa Chenette, who own the 63-year-old Jericho Drive-In, continue to operate their Twist Ice Cream shop on its property since Valentine’s Day.

“Although we do drive-thru only now, the community has been very supportive and very happy we’ve figured out a way to remain open,” Lisa said. “Only one person, usually my husband or I, interacts with a coming vehicle and our employees stay inside the building. We accept cash and touchless credit cards at this time.” The ice cream shop is open from 1 to 8 p.m. daily.

The drive-in hosted “a pretty decent turnout” for a special Easter Sunday service on April 12 where people listened to their pastor’s sermon via their cars’ radios; the pastor spoke into a microphone on the drive-in’s front lawn. “Everyone was really excited and thankful we could do this for them,” Lisa said.

It also hosted Drive-In Day on April 7 where Ravena-Coeymans-Selkirk Central School District teachers parked their vehicles — decked in the district’s colors with supportive posters and signs — between the drive-in’s 12 rows. “Middle school kids then came to the drive-in with their parents who drove up and down each row, and waved at the teachers and administrators,” Lisa said. “We had music playing over the radio for them and we had the ice cream stand open. But no one could get out of their cars.”

Despite these creative initiatives, the Chenettes’ request since mid-April to Empire State Development, the state’s economic development organization, to reopen the drive-in theater received no response.

If it can reopen, Lisa said they feel ready, “We’ve created an online ordering system so people can order and pay from their cars. If we do concession, we’ll deliver to their cars, which we’ve done for the ice cream stand. We’ve also created an online ticket purchasing system on our website so there won’t be any reason for anyone to come up to the box office.”

Ed Caro, who co-owns the 70-year-old Malta Drive-In Theater with his brother, Tom, said they also applied to the state to reopen last month but have not received a response.

“If we reopen, I’m sure the state will mandate certain things like 50 percent capacity and we’ll figure out how to make it safe for our employees and guests,” Ed said. “We may consider doing online ticket sales with a barcode scanner on people’s phones and do just card payments and eliminate cash. We could put in shields between cashiers and guests.”

He continued, “Normally, we have two cars between each speaker post but now we could have just one. We may limit concessions entirely and develop an online ordering system for takeout. For restrooms, maybe one person goes in at a time only.”

Unlike Jericho, the Malta Drive-In theater has not held any special gatherings or events since the pandemic began. “One thing we didn’t take advantage of, which other drive-ins did, was hold Easter Sunday services,” Ed said. “We were concerned about liability and insurance company notices regarding COVID-19 so we stayed away from it.”

However, he expressed gratitude for people’s supportive comments on the theater’s Facebook page. “It’s been very heartwarming and good to see our guests miss us,” he said. “As owners, this is our means of income so we miss it and look forward to getting it going again.”

Frank Fisher, who took over owning Averill Park’s 68-year-old Hollywood Drive-In Theater from his late father in 1968, also appreciated how people left comments on its Facebook page about missing the theater and wanting to come in droves if it reopens.

“Lots of people do want to support the drive-in but I rather stay closed until I’m allowed to open so that people won’t pass the virus to anyone else,” Fisher said. “I’m not really complaining about the state government and all that because they’re protecting us.”

However, similar to Jericho, the Hollywood Drive-In plans to host a few Sunday services starting this week for the Brunswick Church, a Presbyterian church that Fisher goes to. The church services initially shifted to online sermons when the pandemic worsened in the Capital District.

Fisher said he brought up the idea of using his drive-in as a place to temporarily hold services to his pastor.

“The cars will be roughly 18 to 20 feet from one another, so one vehicle will be between the two speaker poles,” he said. “The priest will do the sermon on the premises while people use their vehicles’ radios to listen. But no one will be able to leave their vehicles or use restrooms. We’re going to try this and see what happens. It depends on the weather.”

Fisher also feels prepared if the drive-in can reopen. His ideas include requiring guests to remain in their vehicles when they drive up to the concession building to pay and pick up their orders; and having some employees sanitize the restrooms after one person uses it at a time.

If they can reopen, all three drive-in theaters noted that since no new major Hollywood films would be screened soon as such films are either postponed or made available online, they could screen old films, like those from last year or retro classics. “Everyone is really itching to get out of the house so it almost doesn’t matter what you put on the screen,” Ed said.

Lisa and Caro revealed that eight schools reached out to them about possibly using their drive-in theaters to hold graduation ceremonies. However, since these plans are not confirmed yet as of Sunday, May 3, they did not name the schools.

“Schools are looking for some kind of semblance of a graduation ceremony and they can’t figure out how to do graduation at SPAC [Saratoga Performing Arts Center] without social distancing,” said Ed.

Lisa chimed in, “It’s very early but as far as I know, we could do it as long as everyone stays in their cars. There can be a prerecorded message on the screen, speeches can be made on the microphone while each car listens on the radio, and the senior’s name can be announced with a live video of them walking across a stage or their photo can be screened. We’d be happy to help schools if that’s the way it has to be.”