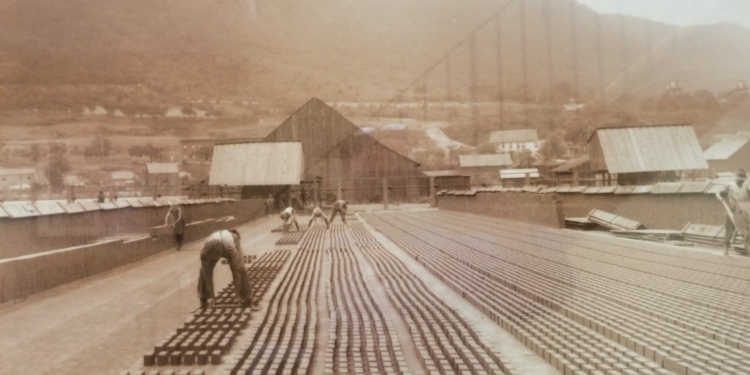 COEYMANS — Beginning around 1850, the riverbanks of the Hudson River near Coeymans provided the materials to build New York and the last manufacturer of brick in the state, Powell and Minnock (P&M) Brick closed its doors in 2001. During this time period, 22 companies produced red-clay and shale-based bricks with materials mined from the riverbank at what is now the Port of Coeymans and its surrounding hills.

“The brick season was April to December each year, because that was when you could dig clay,” Ten Eyck Powell Jr., the grandson of P&M Brick founder Dr. Alonzo Powell, said. Ten Eyck, 91, still lives on his family’s property along the banks of the Hudson just north of the Port of Coeymans, which was once the P&M brickworks.

Alonzo Powell partnered with Thomas Minnock in 1895 to build an ice business, and eventually a brickworks, at what is today the Lafarge cement company docks. As the ice business dried up, the brick business took off.

During that time, another brick maker, Sutton and Sutterley, was located on an adjacent property to the south of P&M. Both plants used clay from the same mine located on the property that is now the port. In 1959, a change in base material, a merger and an investment in a new plant set P&M as the only brick manufacturer left in the area.

“The clay bricks were not very strong. They would crumble more easily,” Ten Eyck said. “Everything went to shale in 1960 with the new plant. They (brick) were harder and more durable.”

The company owned and operated a large shale mine on Gedney Hill just past Sycamore Golf Club. All of the bricks were made with shale from that mine from 1960 forward.

At the same time, both Sutton and Sutterley Brick and Roah Nook Brick came for sale and P&M purchased them. The three companies were producing 275,000 brick a day at that time. In 1962 the company added a second shale-based plant and shut down the remaining clay-based plants. The company had a successful model, but another change was on the horizon.

“This process made [P&M] a very successful family held business, created from investments from a number of family members. Some who worked in the business and others that didn’t,” Ten Eyck said. “By the late 1960s, some members of the family wanted to expand and others wanted out.”

Ultimately, the family decided to sell the business to General Dynamics, a defense contractor that is known for building warships and planes, in 1968. They were the last family brick company in the area, but the company continued to expand.

According to Gregg Thomas, who worked at the P&M plant from 1979 to 1999 and was a plant manager from 1985 to 1999, General Dynamics continued operations and expanded operations by adding a second automatic tunnel kiln in 1971 and a new additional brick plant in 1989.

“The new molded plant gave us the capacity to do extruded and molded brick,” Thomas said. “No one else was doing that, we were unique.”

Returning to the older method of making brick allowed P&M to charge more for the product.

“There was such a demand for the older-looking molded brick to match those made a century ago,” Thomas said. “But it was much more expensive to make.”

Poor plant design also made the process even less efficient and the expansion hurt the company financially.

“The materials were mixed with augers and it looks like toothpaste coming out of a tube,” Thomas said. “And the molded bricks were done like packing a pail at the beach and flipping it over.”

According to Thomas, the bricks during his time contained about 85 to 90 percent shale and only 8 to 10 percent clay. While the shale gives the brick its hardness, the clay makes it smooth but does not give it the color.

“The shale and clay are grey, but the brick burns red (after being in the kilns),” Ten Eyck said.

According to Thomas the peak production at the plant during his time was about 60-65 million brick per year, most of which were initially shipped on barges, from the onsite dock and unloaded in a company facility in Brooklyn for construction projects around the city, but then it became more economical to ship by truck.

The final years of P&M showed a steady decline in production and saw the company sold twice, once in 1993 to Calcitherm Nederland NV and then to a private Turkish group, Isibar Brick.

“Isibar was the largest brick company in Turkey, “ Ten Eyck said. “All buildings in Turkey had to be brick because of previous fires. They didn’t use wood.”

The company was not successful and began selling off equipment and by 2001, stopped paying taxes on the property. A group of P&M site managers tried to bring the brickyard back, but failed to get enough financing.  The plant closed and all its property and remaining equipment was sold in 2002.

P&M was the last brick manufacturer in New York.

Delmar man traces family history — not separate, but equal — down through DNA