DISCOVER DELMAR: A ballroom under the former Bank of Bethlehem holds secrets of its own 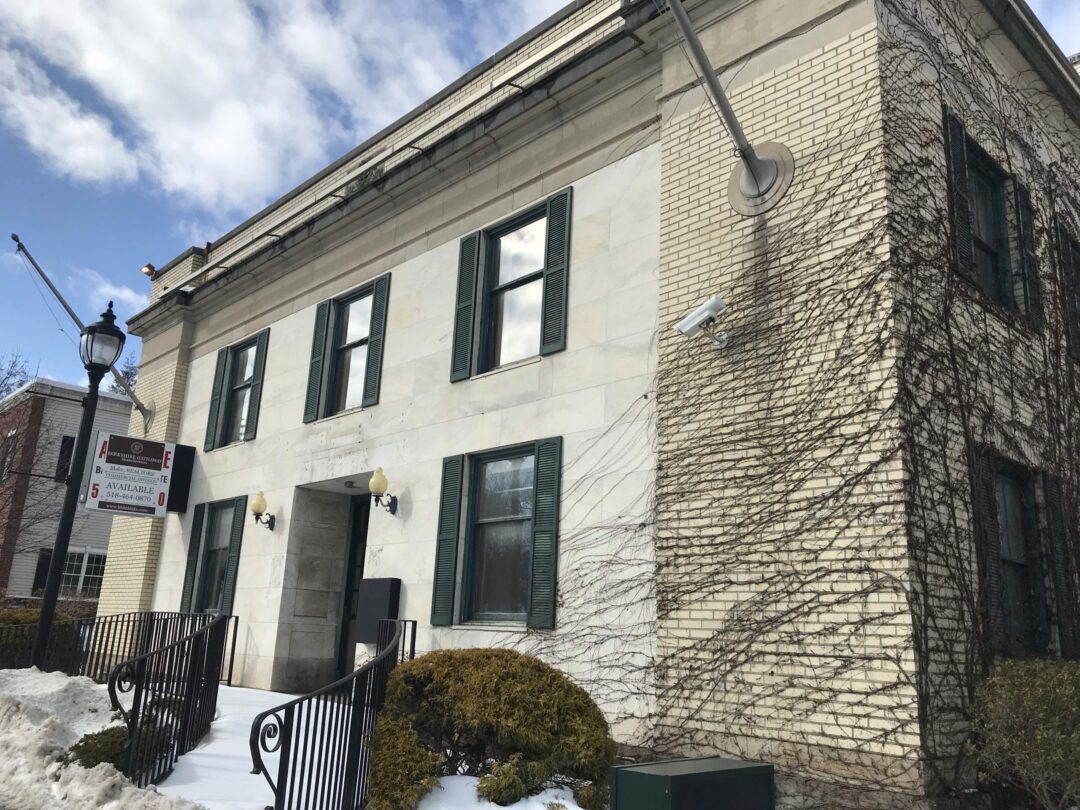 DELMAR — Under a set of stairs quietly tucked away in a corner of a bank lobby, a hidden room has a story to tell.

Looking at the old Bank of Bethlehem, located at 343 Delaware Ave., it looks like a normal bank building. Having housed at least four banks since the building was assembled, the lobby boasts a bunch of counters, an empty, open bank vault and a place for waiting. Across the room from the counters, long-vacant offices sit silently. The building is dark, dingy and abandoned. As Berkshire Hathaway continues to market the land, the doors remain locked.

However, I had the opportunity of getting into the building. The secret lies at the bottom of the hidden stairs to the left of the lobby, to the left, and down a cement hallway. Down a few more stairs, the realtor turned his phone flashlight on and looked at me. “This is it,” he said. “This is where the ballroom was.”

A checkered floor is hidden under a few inches of water. Five wrought-iron chandeliers hang from the ceiling, dusty but still functional. The walls are cement, but white adhesive is still attached methodically. The crusty paste once held mirrors to the walls, giving the room a taste of elegance.

There are no windows and no outside light; only the light from our phones gave us the ability to see around. An extra vault is on the far left wall. Long emptied, the door is open.

Another exit leads out the back. The room is not big, but not small; it lies underneath where the drive-thru now is.

History doesn’t lend itself too well. Records were not kept of this room. Most locals don’t even know the room is there, and those who do are unsure what it was used for. We do know about the beginning.

The building began as the Bank of Bethlehem, opening in 1928 at the height of the Prohibition era, according to Bethlehem Town Historian Susan Leath’s book, “Historic Tales of Bethlehem, New York.” Plans for the building were created by Galen H. Nichols, and construction was done by the C.V. Soule Company of Delmar in about five months. D.A. Bennett owned the land and was a director of the bank when it opened. Bennett and a business partner started the bank because there were no local banks at the time; all banking was located in Albany and was about a day’s journey. “Historic Tales” cites the bank as a source of charming, historic ads for a local newspaper.

In 1937, the bank was acquired by the National Commercial Bank and Trust, according to “Historic Tales.” NCB&T traces its history back to 1825 when it was chartered by Gov. Dewitt Clinton as the Commercial Bank of Albany. The bank adopted the KeyBank name in 1979.

The ballroom was possibly used as early as 1928 by a fraternal organization called the Improved Order of the Red Men. The Redmen, as they were commonly called, often put on dances at a hall once located at 10 Hallwood Road, right behind the bank building. The dances date back to 1890, Thomas Drake, the grandson of D.A. Bennett, said.

“The Redmen would use the dance hall on Hallwood for functions,” Drake said. “We’re unsure if they ever used the room under the bank.”

Along with the dances, the organization would perform new member ceremonies, minstrel shows and banquets. While The Redmen did not have a Delmar chapter, there were several active ones in Albany at the time, David Lintz, Director of the Red Men Museum and Library, said.

“The use of the ballroom under the bank would depend on what it had that the other locations did not,” Lintz explained. “It was very common for the group to hold private parties in rooms like these.”

What these private parties consisted of is unclear. The Redmen, still in existence today, “are a non-profit organization devoted to inspiring a greater love for the United States of America and the principles of American liberty,” according to the official website. “Along with our women’s auxiliary, the Degree of Pocahontas, we support various charitable, youth, and educational programs.”

Dances and functions for the organization were well documented at the time in question, and a search will yield several events located in the area. None that we could find mentioned the room.

It’s impossible to say if alcohol was involved in any of the functions during Prohibition; however, it would not be uncommon for this to happen in the area. The Home Lawn Hotel, once located in Slingerlands, was a known location for imbibing. The hotel was closed in 1922 after a local was killed by a drunk driver who drank at the hotel. After the death, residents called the hotel a “public nuisance” and called for its closure, according to “Historic Tales.” The judge agreed and ultimately ordered the proprieter, Albert Kientz, to shut the doors.

Former Assemblyman Jack McEneny called Delmar a “straight-laced, Protestant town” at the time, but did not know of the room. Albany historian and author William Kennedy did not know of the ballroom at all. Of the 15-plus sources we talked to, nobody could even venture an educated guess on what else the room could have been used for during the unaccounted-for years.

As the bank evolved, whispers of a “meeting room” float around, used by the bank for parties and meetings. Unfortunately, no concrete records of any functions at 343 Delaware have been found in the week of research done. Drake said he found the blueprints for the bank, dated 1955, which show the room.

Many years later — the exact date is unclear — the room was used as a temporary home for a local church, Meyers Funeral Home owner Ben Meyers said. Meyers recalled the church used to call him for floral arrangements as needed. He also was a teller at the bank while it was under the KeyBank umbrella, the third bank to inhabit the space.

“It was a church for about a year,” Meyers said. “There were mirrors on the walls and I remember a mural that used to be there. I believe that Glenmont Community Church rented the space until they got into their new building.”

Drake recalls something similar to a church using the room but does not remember what church it was or for how long it was there.

Meyers added those who attended the services had to come in the back door, which leads right into the ballroom. Anyone who used the room could not use the staircase located in the bank lobby, he continued.

After the church moved out, the room seems to have been incorporated as storage. While Leath and other Bethlehem officials refer to it as a “ballroom,” it’s unclear how many, if any, balls were ever held there.

Spotlight News’ Kaitlin Lembo would love to write a follow-up story with more about the secret ballroom and about the history of other rooms such as this in the area. If you know anything about the underground ballroom, or other spots like this in Bethlehem, please call her at 518-439-4949 or email her at [email protected]