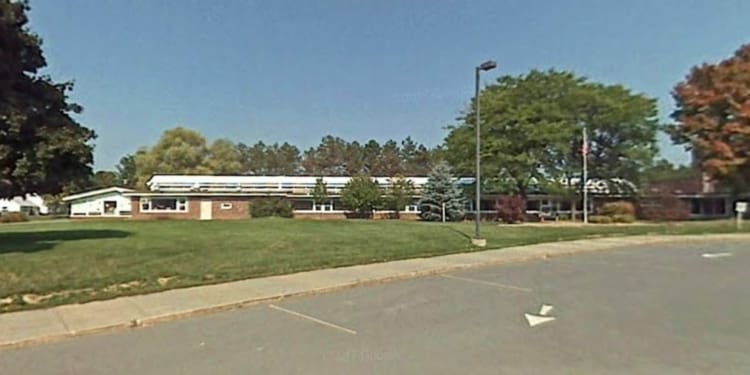 BETHLEHEM — The Bethlehem Central School District Board of Education will review and vote on its agreement with the Albany County Sheriff’s Office to purchase the Clarksville Elementary School during its next meeting, which takes place in the high school library beginning at 7 p.m. on Wednesday, Nov. 7.

In a press release sent to Spotlight News on Tuesday, Oct. 30, Judith Kehoe, the school district’s chief business and financial officer, said that the county Legislature had approved the official purchase back on Oct. 9, 2018. The building and grounds would be purchased for $325,000. The school district “would receive $198,000 at closing and $127,000 of in-kind patrol services by the law enforcement agency over a five-year period.”

Regarding the in-kind services, two sheriffs are planned to patrol the high school perimeter in separate vehicles typically from 10 p.m. to 6 a.m. “from the Tuesday evening following Memorial Day through the evening of graduation (typically the last Friday in June).”

The county Sheriff’s Office, which first leased the property since 2012, has considered purchasing the school since last year.

“We are pleased the county has given the go-ahead for this much-anticipated inter-municipal agreement,” Kehoe said. “With the prospective owner already in place, there will be little disruption to the community, the Sheriff’s Office can proceed with improving its services, and the district will benefit from the sale of a property at its appraised, fair market value.”

Clarksville Elementary School had closed during the 2010-11 school year, after BCSD found that enrollment had been declining, a trend that has continued. According to a report by the Capital District Regional Planning Commission, district enrollment peaked at 5,182 students in 2006-07. Since then, it has declined by around 14.2 percent to 4,451 in 2018-19. Projected enrollment for the 2022-23 academic year is around 4,135 students, a 7.1 percent decline from 2018-19’s number. All these numbers are meant to be estimates, not exact, the report stated.

The report took into account several factors. First, enrollment has been experiencing a generational shift. In just a few years, only the children of Generation Z, a smaller generation than Millennials, children would be the only ones attending within a few years. Second, there has been a slow decline in birthrates in the school district, from 300 in 2002 to 198 in 2015 — the report connected this with how more women are waiting longer to bear children in recent years.

Lastly, it acknowledged that over 20 residential developments have recently either been approved or proposed within the school district. While this assumes that enrollment would increase in the future, the report stated that the timeframe when such developments will be fully constructed and completed are uncertain.

However, Judy Abbott, a New Scotland resident with children attending within the school district, said that selling the school “was a waste of taxpayer money and it really limits our flexibility as there is obvious residential growth in our school district and I don’t think the report’s enrollment projections looked into that.”

Emphasizing that she is neither against the county Sheriff’s Office nor the school district though, she reiterated that the report did not take into account that there has been a rise of residential development growth within the school district, which could mean that enrollment should increase sometime in the future.

She also brought up how the school building first opened back in 1949 and has since been listed on the National Registry of Historic Places.

Designed by architect Henry L. Blatner, the building was seen as the first nationwide that was considered “all-access” back when it first opened, being handicap accessible to handicapped people and environmental by having passive solar heating and lighting.

Abbott said that this all predated the Americans with Disabilities Act (1990), today’s energy-efficient architectural designs and the Environmental Protection Agency, which came in 1970.

She said that the school’s innovative design has inspired similar designs in other schools across the country.

“I just think that [the school district] could’ve accommodated the county Sheriff in another way. I support the school board and Sheriff and have always paid my taxes but I feel like there could’ve been better options,” she said. “Clarksville had a wonderful, diverse community, great teachers and great wide open space.”

Conversely, JoEllen Gardner of the school district’s communications office said that the school’s purchase was “a win-win for the community” and that “no community wants vacant buildings and this intermunicipal agreement ensures the building remains occupied.”

Kehoe added that this approved purchase agreement would further strengthen the school district’s relationship with the county Sheriff’s Office.

Busy night for the Colonie Planning Board