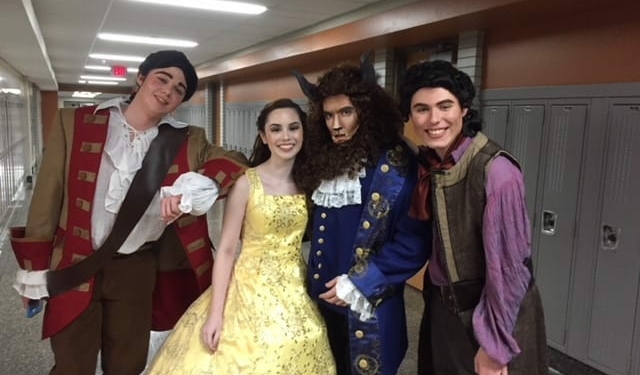 Delaney Beck and Ian Meyer star as Belle and The Beast in Stage 700’s production of Disney’s “Beauty and the Beast.” Photo courtesy of Colleen Bonacci

BETHLEHEM—Students in the Stage 700 theatre club at Bethlehem Central High School are busy preparing for the opening night of their spring production, “Beauty and the Beast,” which will take place this Thursday, March 22 at 7 p.m.

More than 120 students in the cast, orchestra and production and technical crews have been working hard to bring the familiar tale to the high school stage, according to Parent Producer Colleen Bonacci, who said the sets, costumes and special effects are primarily handmade, rather than purchased or rented.

Director James Yeara, a retired BCHS theatre teacher who still returns to direct school productions, has plumbed the history of the tale of Beauty and the Beast and the many ways it has been told over the years. While the school is performing the 1991 Disney animated version, with the well-known music by Alan Menken, Yeara said that he has incorporated elements from Disney’s 2017 CGI version (which Yeara decried as woefully auto-tuned) and Jean Cocteau’s 1946 La Belle et la Bête, and has added a few touches of his own (Gaston’s “selfie” portraiture) to make the performance both familiar and unique.

“We’ve tried to be true to the core of the tale that goes back to the Greek myths,” he said, after briefly explaining the tale of Psyche and Cupid, on which Beauty and the Beast is based. “We don’t get to have love at first sight, we have to earn love; love comes from conversations and kind of a sharing and blossoming of the soul. It’s not just a dopey musical, there’s a great story underneath. A classic story.”

“I have enjoyed this experience so much,” said BCHS senior Matt Bonacci, who plays Gaston’s sidekick LeFou. “It is amazing to be able to work with so many different creative minds! Everyone works so hard and cares so much.”

Bonacci said that the role is very physical, requiring elbow and knee pads on stage, but he has clearly enjoyed playing the “over the top,” “flamboyant” character. “Even though LeFou is a villain,” he said, “he’s such a lovable character and it’s been so beyond fun to play him. I get to do so much and push myself. I’ve felt myself grow as an actor and person.”

“Bethlehem kids are up to the task of acting,” said Yeara. Beyond blocking and

memorization, he said students have been working to create a moving set that will shift around during the songs (which he guaranteed won’t be auto-tuned). “It’s a huge undertaking. The kids constantly have to move, they have to act, they have to react to things.”

“The directors have given the chance for everyone in the cast to shine,” said Bonacci. “It’s great to see the younger kids put them self out there and try so hard. I remember being scared and not willing to take risks, but the older kids helped break out of that shell. I try to be that force to the younger kids, I know that they’re great, and I want them to be comfortable so they can be their best. This cast really is a family!”

“Being a part of the BCHS theater and music programs throughout my high school career is an experience I will never forget,” said senior Delaney Beck, who plays the role of Belle. “To be able to do Beauty and the Beast my senior year has been such a joy and pleasure and has definitely topped the cake.” Beck, who will be attending Skidmore College next year, said that she considers the BCHS theatre program to be a second family and that she hopes to continue to be involved with theatre in college. “Throughout the past four years I have created friendships to last a lifetime,” she said.

Senior McKenzie Albrecht, who plays a variety of roles in the performance, said she’s “dreading having to say goodbye” to the friends she has made during the four years that she has been involved with the theatre program. “Theatre is what really made BC so wonderful for me because I got to do what I love with all of my friends,” she said.

While Yeara declined to say whether he will be directing musicals for BCHS next year, he has already agreed to direct the final BCHS play of this school year. Auditions for On The Razzle will take place only a week after Beauty and the Beast closes.

Spotlight on Finance: Plan ahead financially when preparing to buy a home