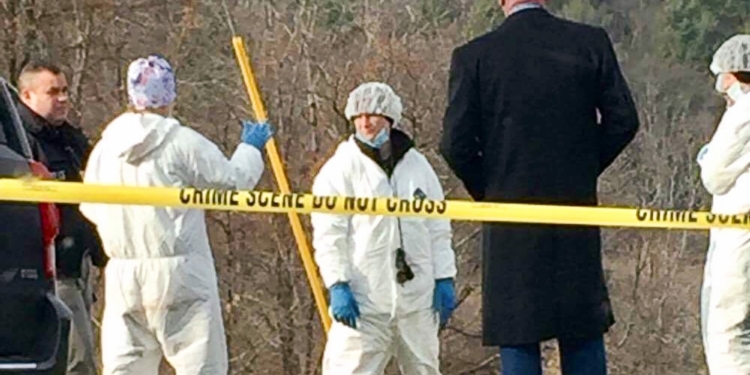 BETHLEHEM — Bethlehem Police ruled out foul play as the cause of death behind the body found near Hoffman Car Wash on Delaware Avenue in Elsmere on Saturday, Dec. 2.

Bethlehem Police Commander Adam Hornick said the remains belong to a woman who lived in the Capital District, but would not reveal her name or hometown until after family from out of town had been notified.

In a Monday evening press conference, Hornick said the unnamed woman had not been reported missing. Police said neither drugs nor alcohol are not believed to be a factor in her death. Officials estimate the woman had died in September.

A hunter found a badly decomposed body on Saturday, Dec. 2, halfway down the hill behind Hoffman’s Car Wash on Delaware Avenue.

Commander Adam Hornick said it is “too premature in the investigation to determine the race, age or gender of the decedent, and it is too premature to say the cause of death or the manor of death.”

The body was taken to Albany Medical Center Hospital where an autopsy was performed Monday, Dec. 4, Hornick said.

The body is so badly decomposed it is impossible to estimate at first glance how long it has been there, Hornick said.

It was found on a hill just a few hundred feet from a busy stretch of Delaware Avenue and not far from a public dog park, a private farm and nature trails along the Normans Kill Creek the runs along the bottom of the hill.

“Given the area it was located, we are not surprised it was not located before this time,” Hornick said. “It’s close to an area where people frequent but not right in the area. There are trails, but they are on both sides.”

Police had yellow tape running from the guardrail surrounding Hoffman’s parking lot to about half way down the hill.

Hornick would not comment on the personal effects and/or clothing found on or near the body, if any.

Reserve at Feura Bush | Vote on whether to rezone a Glenmont property for 48 condos not expected this year, if ever

SRI poll: Majority will spend the same as last year on gifts; 33 percent believe in Santa