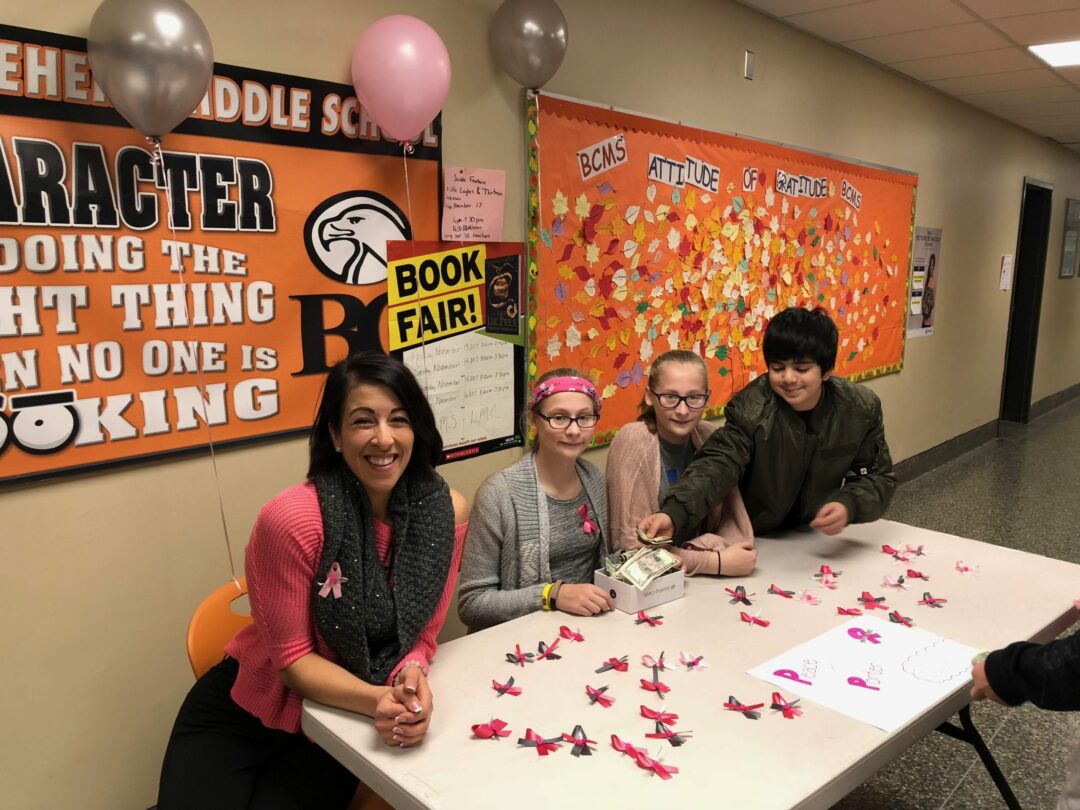 The effort began, said 7th graders Gracelyn Pritchett and Matthew Golonka, with a desire to do something to honor a teacher who is fondly remembered even by students who never took her class. Initially, the idea was to wear pink to school. Golonka’s friend, Ben, however, pointed out that pink is the color for breast cancer awareness and gray is the color for raising awareness about brain cancer — the disease that took Porter less than half a year after she was diagnosed.

The pair made an effort to spread the word to wear gray, Golonka said, and it quickly got around. School counselor Chynna Marcucci, who facilitated the Peace for Porter effort, said that Pritchett and Golonka initially came to her in disagreement over which color scheme would be most appropriate, but that a pink-and-gray compromise quickly evolved into questions about how to publicize the effort and whether donations could be raised for Porter’s favorite causes.

Walking down the halls of BCMS just after 2 p.m. on Friday, Nov. 17, it was clear that the students had gotten their message out. Faculty, staff and students, adorned in pink and gray, wore ribbons that had been purchased for $1 to support the Bethlehem Music Association and the International Rescue Committee, causes for which Golonka learned that Porter had requested donations in lieu of flowers.

Students made more than 600 ribbons and, after overhead costs, raised a little more than $630, by first count early Friday.

“These are two of the many students who came in at 7:30 in the morning, gave up lunch time, gave up home base time, stayed until 4 o’clock in the evening — they put every ounce of themselves that they could, outside of academics, into this,” said Marcucci.

“She left a big footprint on many hearts and many families,” Marcucci said of Porter. “I had a mother come in today, whose kid had Miss Porter as a teacher 15 years ago, and she came in to buy ribbons.

So many students were volunteering to help, said Marcucci, “They had to sit on the floor in the conference room.”

“We only had two days to do it,” said Pritchett. “And it was very surprising walking into school this morning and seeing all the kids, and a lot of them were wearing a bunch of pink and gray. And we didn’t know if anyone was going to take this that seriously, because it was that last-minute.”

Porter worked for BCSD for 20 years, at both the Eagle and Glenmont elementary schools. She passed away on Sunday, Nov. 12, at the age of 54, after a four-

month battle with brain cancer. She was raised in Delmar and graduated from the Bethlehem Central School District in 1981. According to her obituary, Porter believed “‘one good year’ of school could change the trajectory of a child’s life for the better and she took this responsibility seriously.”

“Within ten minutes in the morning, we sold the first 400 ribbons that we made,” said Pritchett.

“Yeah,” nodded Golonka, “We thought we had made a bunch!”

The idea of donating, said Marcucci, came before the idea of making ribbons. Golonka read Porter’s obituary and inquired as to whether they might raise funds to support the causes Porter cared about. Marcucci then took the idea to BCSD administration and found that they were supportive. “They’ve helped,” she said. “People have tolerated us being everywhere: administration, maintenance, and parents who have come up to help or buy ribbons.” Mostly, however, Marcucci credited the students, and their ability to come together to honor an individual who gave them an important gift.

Golonka and Pritchett described rushing to make more ribbons to sell, as they found their — and their classmates’ — efforts overwhelmed by the enthusiasm of those who came out to remember a BCSD alum and educator who clearly touched many lives.

BCSD Superintendent Jody Monroe said that Porter has been invariably invited each year to the commencement ceremonies of students she had taught in elementary school, a testament to her lasting influence on their lives and education.

“Mrs. Porter’s dedication and her love of children made Bethlehem a better place,” said BCSD Superintenden Jody Monroe. “She had a way of making her students feel special and they have carried that with them as they have grown. She had the same effect on her colleagues, no matter where she went. Chris Porter has left an indelible imprint on this community but to lose her in this way is difficult.”

Grief counselors have been made available at Eagle Elementary School and Glenmont School, as well as at the middle school and high school, to assist the school community in dealing with the untimely loss.

A memorial service to celebrate Porter’s life will be held on Saturday, Nov. 25, at 11 a.m. at the First United Methodist Church in Delmar. In lieu of flowers, please consider making a donation to the Bethlehem Music Association or the International Rescue Committee. To leave a special message for the family, visit NewComerAlbany.com.

EDITORIAL: Give thanks, lend a hand