Bethlehem Democrats hope to get candidates elected on another party line 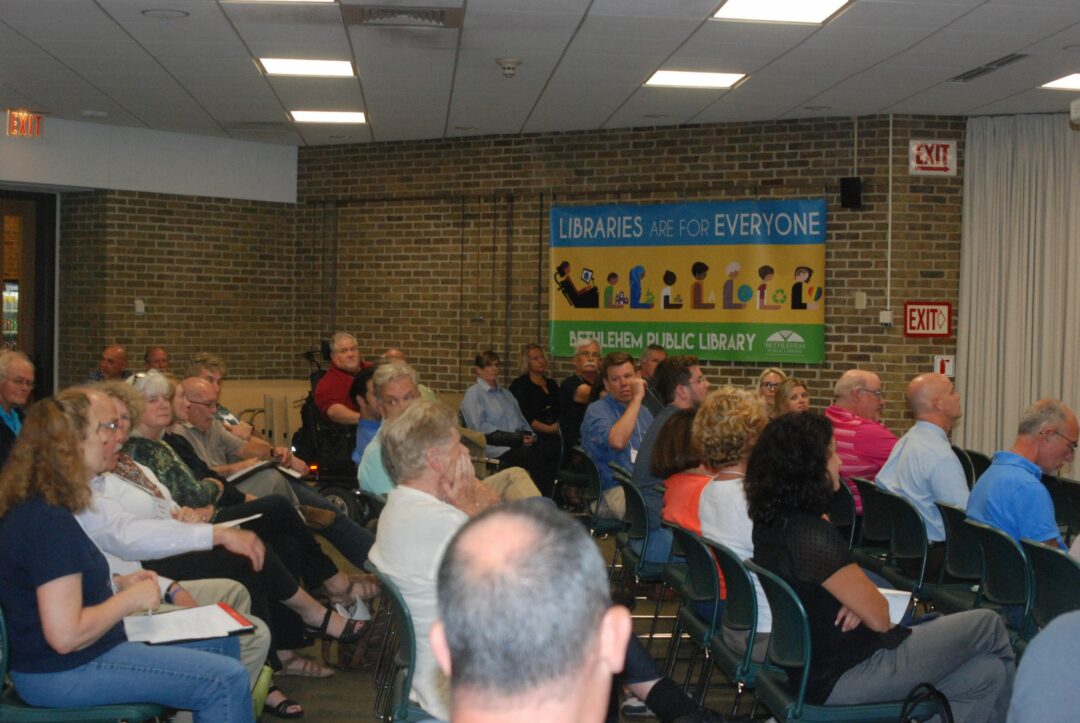 BETHLEHEM — The Bethlehem Democratic Committee has overwhelmingly chosen to support two candidates who will not be appearing on their party line in the November election.

During a meeting at Bethlehem Public Library on Thursday, Sept. 14, committee members debated how to approach the coming election after two Democratic candidates filed a lawsuit that bounced their opponents, BDC’s chosen candidates, from the Democratic ballot.

After Democratic Elections Commissioner (and former BDC Chair) Matt Clyne informed them of of an error in paperwork BDC filed with the Albany County Board of Elections, Town Board candidate George Harder and Highway Superintendent candidate Dan Morin filed a lawsuit that ultimately invalidated the candidacies of their respective opponents Dan Coffey and Giles Wagoner.

Clyne, Morin and Harder have all criticized the process by which BDC leadership chose to endorse Coffey and Wagoner after Brent Meredith accepted a job at the University at Albany and declined to run for reelection late in the process, after petitions had already been gathered. The timing of events, said current BDC Chair Jeff Kuhn, necessitated the hastened process.

The state appellate court decided in late August that the certificates filed by BDC had been properly invalidated, ejecting Coffey and Wagoner from the Democratic ballot line and denying them a primary contest against Harder and Morin. As the Working Families Party, which filed the substitution paperwork correctly, also endorsed Coffey and Wagoner, they will still be appearing on the November ballot — but only on the WFP line. On Sept. 14, the full Democratic committee gathered to decide whether they would support the candidates appearing on the Democratic ticket or the candidates appearing on the Working Families ticket.

A decision to support the candidates appearing on the WFP ticket means risking a split vote, as some Democrats are likely to simply vote their party line while others will vote with the committee to support their party’s chosen candidates. In an election season with tough GOP competition for those seats, the decision was not one to be taken lightly.

Committee members, who clearly felt their ballot line had been hijacked, however, were unwilling to be held hostage by candidates they repeatedly characterized as under qualified, if not downright dishonest.

After Morin released video of an August BDC meeting to former Bethlehem Republican Committee Chair Keith Wiggand, in which both men misconstrued something Kuhn said to mean Democrats had knowingly filled out the substitution certificates illegally (rather than merely erroneously), committee members have questioned his loyalty to the party. Wiggand posted the video to his Facebook page and indicated that he would be attempting to get BDC leadership arrested and disbarred.

At the outset of the Sept. 14 meeting, committee member Emily Saunders introduced a motion to request Morin not share video coverage of the meeting with Wiggand. The motion passed. Morin told Spotlight News he had no intention of showing the video to Wiggand, who he has described as a lifelong friend, and said that he was merely making the recording to review the committee’s statements for any inconsistencies.

Many committee members criticized the close relationship Harder and Morin seem to have with the opposing party and, in particular, with its more outspoken members. Wiggand, some noted, has made some personal attacks against committee members (at least one of which involved a member’s teen-aged daughter) and has even gone so far as to ask those he has targeted if they “have had enough.”

Incidentally, both Harder and Morin came to the Sept. 14 meeting directly from a fundraiser for Gary Fish, the Republican candidate for Town Supervisor. Morin later told Spotlight that he was unaware that event at Swifty’s Pub would be taking place and he had only been eating dinner there with his kids, but he and Harder were seen seated at a table with Fish and his supporters.

Morin later explained he has friends on both sides of the political aisle, having lived in Bethlehem for almost 50 years. “I grew up with a lot of people and just because they might be on another party doesn’t mean I’m not friends with them,” he said.

Having ejected Coffey and Wagoner from the Democratic ticket, Harder and Morin requested that BDC formally endorse their candidacies, including financial support for campaign materials. Harder referenced BDC by-laws, which he said require the committee to support him and Morin as the Democratic candidates.

During the Sept. 14 meeting, Kuhn responded by addressing Harder’s claims, going through the by-laws and concluding that the committee has a responsibility to support the most qualified Democratic candidate, regardless of which line they are running on. He noted committee members have repeatedly indicated overwhelming support for Coffey and Wagoner and went on to question Harder’s campaign tactics, which he claimed ran afoul of the very BDC by-laws invoked by Harder to impel BDC endorsement.

Kuhn told the committee, “I don’t decide whether or not I’m going to endorse someone who has called me a criminal. That’s up to you guys.”

“Had there been a primary and George [Harder] and Dan [Morin] had won, I would’ve supported them,” said one committee member. “But, by their behavior, by their ignoring the requirements and requests and the votes of the committee prior to this, they’ve disqualified themselves from getting my support. I don’t think they’ve shown that they’re even smart enough to handle the kind of difficult decisions that need to be made by people on our town board. If they can’t even understand that trying to hold us hostage, trying to decapitate the candidates that this committee has wanted to run, is likely to get them the support of this committee. I, for one, can’t endorse these gentlemen for any role of responsibility in this town.”

“Why would someone want to take our choice, as voters, away from us,” asked committee member and County Legislator Bill Reinhardt. Calling the error that got Coffey and Wagoner booted from the Democratic line “an honest mistake,” said that he felt “the committee should support the best candidate.”

Ultimately, the committee — again — unequivocally decided to support the candidacies of Coffey and Wagoner.

“I am so honored and humbled to have the endorsement of the Bethlehem Democratic Committee,” said Coffey. “I will continue to campaign door-to-door meeting one voter at a time and keep my campaign focused on issues and how best to move our Town forward. I also have the endorsement of Bethlehem Indivisible and the Working Families Party. I am confident the well-informed voters of our Town will vote for me on Row “E” come November.

Coffey said he’s ordering bumper stickers saying “Endorsed Democrat on Row E” and will be placing them on all his lawn signs.

At the beginning of the meeting, Coffey resigned his position as the committee’s first chair, stating he “felt it best to avoid any potential conflict of interest between doing what is best for our party versus what may advantage me as a candidate.”

A vote was immediately held and Joanne Cunningham, a county legislator and former BCSD board member, was overwhelmingly approved to replace Coffey. The only other name put forward was Jared King, who was nominated by Harder. Kuhn, however, said that because King is not a committee member, he was ineligible and declined to recognize the nomination. (In fact, BDC by-laws contain no express provision requiring leadership candidates to belong to the 62-member committee.)

“I am honored to join the leadership team of the Bethlehem Democratic Committee, which includes some of the hardest working, dedicated and thoughtful folks that are committed to the highest standards for our candidates and our political discussion,” Cunningham told Spotlight the following day. “I look forward to rolling up my sleeves to help our Committee continue to make a positive difference in our great town.”

“To paraphrase Bernie Sanders, a man I greatly admire for his tenacity and perseverance,” said Harder following the Sept. 14 meeting, “all over this town we have a lot of bright, decent, good people of all party affiliations who say you can’t beat the corrupt Coffey/Cunningham/Clarkson machine; you can’t win; I’m giving up. That is exactly what the leaders of the machine want you to say! We can win this fight against governmental incompetence and dishonesty if we stand together.”

Morin declined to comment on the events of the evening.

(An earlier version of this story stated that non-committee members are ineligible to run for office. BDC by-laws, in fact, contain no such provision.)