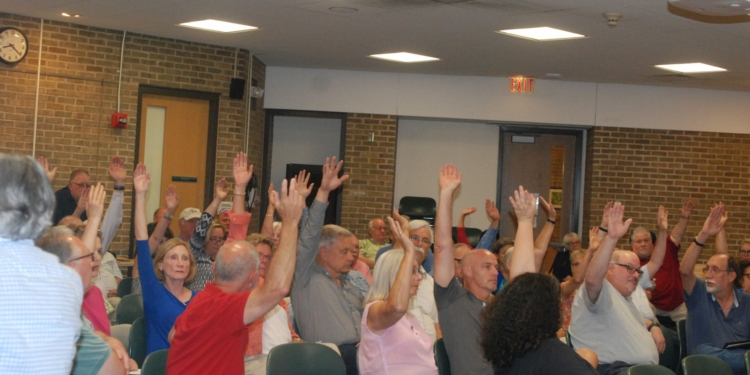 Though Giles Wagoner and Dan Coffey may not appear on a primary ballot this September, members of the Bethlehem Democratic Committee show their support for the two. (Photo by Ali Hibbs/ Spotlight News)

BETHLEHEM — Members of the Bethlehem Democratic Committee signaled their overwhelming support last week for two town candidates who may not even appear on the Democratic ballot line in the fall.

During an open committee meeting on Thursday, Aug. 10 to discuss a lawsuit — brought by Democratic challengers — that blocked the party’s endorsed candidates from running in the September primary election, members were clearly concerned that internal squabbling will only serve to benefit Republicans in the November election.

Despite attempts to convince Dan Morin and George Harder — who collected their own signatures to run for Highway Superintendent and Town Board (respectively) in the Democratic primary — to drop the lawsuit against their opponents Giles Wagoner and Dan Coffey, an appeal will still be heard on Thursday, Aug. 24. If it succeeds, there will be a Democratic primary election less than three weeks later.

If it doesn’t, the Democratic candidates endorsed by the Democratic Committee will only appear on the Working Families Party ballot line in November.

During the meeting, BDC Chair Jeff Kuhn presented a timeline of events to members, explaining the situation from the perspective of committee leadership and asking members how they would like to proceed:

BDC begins collecting signatures to put the following candidates, chosen on May 11, on the party’s ballot:  Brent Meredith for Highway Superintendent. Giles Wagoner and Maureen Cunningham for a pair of Town Board seats.

Meredith informs BDC leadership that he is going to accept a job with UAlbany and would decline to run for re-election.

(While Coffey acknowledged it was likely that Meredith had submitted his application to the school months prior to accepting the position, he insisted the committee had no knowledge of that when they began collecting signatures for his candidacy.
“I assume Brent was hedging his bets,” said Coffey. “Had he not run for Highway and then not gotten the UAlbany offer, he would have been left with no job.”
Had the committee known, he said, “We would have found another candidate, such as Giles, rather than printing, distributing and collecting 1,200 signatures on petitions containing Brent’s name.”)

BDC announces that it is reopening the interview process for Highway Superintendent candidates.

Morin, who has worked for the Highway Department for more than a decade, declines to resubmit his name. He also criticizes the party for not automatically endorsing him in Meredith’s stead and looking outside of the Department for a candidate to lead it.

BDC leadership interviews four candidates to replace Meredith’s and selects Wagoner, which created an opening for a Town Board candidate for which he’d previously been endorsed.

Kuhn indicates there wasn’t enough time to reopen the interview process for the Town Board seat.

BDC leaders decide to run Coffey (who told Spotlight News that he has previously considered running for the office) for Town Board.

BDC files a petition designating Meredith as the candidate for Highway Superintendent and Wagoner for Town Board; claiming there isn’t enough time to gather enough signatures for a new candidate.

Both Meredith and Wagoner file certificates with the BDC declining their candidacies.

BDC files certificates with Albany County Board of Elections.

Giles Wagoner for Highway Superintendent. Dan Coffey for Town Board.

Last day to file designating petitions with Albany County Board of Elections.

Morin and Harder file a lawsuit against BDC leadership, the substitute candidates (Wagoner and Coffey) and the Albany County Board of Elections to have the certificates of substitution invalidated after Democratic Elections Commissioner Matt Clyne, a former BDC chair who has been at odds with current leadership in the past, alerted Morin and Harder to the fact BDC officials had neglected to sign a section of the substitution certificates.

Several committee members suggested during the Aug. 10 meeting that Clyne failed to fulfill the obligations of his position as Democratic elections commissioner by not providing the relevant guidance to the BDC candidates. Clyne has said he was under no obligation to do so.

Clyne, Kuhn, Coffey, Wagoner and Harder along with Morin, who is not a registered committee member, were all present at the abruptly called meeting to discuss the issue, along with a majority of the committee’s membership. Of its 61 members, 51 were present, with three carrying proxies for members unable to attend.

Committee member and County Legislator Joanne Cunningham said the lawsuit was obviously “meant to deny the opportunity for a Democratic primary,” and that it “smacks of sour grapes.”

Cunningham asked Morin and Harder if they would be willing to rescind the lawsuit. She went on to say that, if they don’t, the likely outcome will be a divided party that will lose those seats to GOP candidates in the general election, a concern that was echoed by many in attendance.

“Given that you were considered by this committee,” Cunningham said to Morin and Harder, “and were not supported with anything more than a couple of votes, then I guess you’re comfortable with that. I personally would not want to be responsible for launching a process that would deny the Democratic voters in our town the opportunity to choose in the primary. I would want to go head-to-head in that contest and see how I do.”

Cunningham eventually made a formal motion to have the committee to ask Morin and Harder to withdraw their lawsuit the following day. While the motion succeeded 47-3, with two abstentions, it was not seriously considered by either of the litigants.

Coffey took responsibility for the incorrect certificates, as he printed the names in the affidavit section and filed the forms with the elections board, but then said that he felt the lawsuit was intended, at least in part, to throw him off his game.

“If we were not so tied up with the lawsuit,” he said, “I’d be running now and I’d be running hard because I’d know I had a primary. We’re not going to find out until the end of August whether there’s going to be a primary. I don’t want to wait that long.”

Coffey, a lawyer, said that he and Kuhn, also a lawyer, and their elections lawyer all feel that they have a 50 percent chance of winning their appeal and securing a primary election. Acknowledging that he had not been endorsed by the committee — and adding that neither had Harder, who only received 3 votes during the May 11 endorsement meeting (Wagoner and Cunningham received 48 and 47, respectively) — Coffey asked for the committee to vote on who they would support in the event of a primary.

All the candidates were given a chance to speak.

Morin and Harder, ostensibly at the urging of their lawyer, declined to say much throughout most of the meeting, although Morin did say that he would have liked to have a primary. “I spoke to Giles about that,” he said. “And told him I’m sorry this is how it went down.”

Morin declined, however, to speak about his candidacy, saying that he only attended the meeting to “listen to what was going on” and was caught off guard by the opportunity to make his case.

“Then withdraw your petition,” said Cunningham, as other committee members groaned.

“This is what I don’t understand,” said Morin. “Everybody’s against me on this. I went out and got signatures. I knocked on doors. I went out and did all this stuff.”  He then went on to say that he is “trying to do better for the Highway Department,” and that he’s witnessed “a lot of disgrace” during his 13 years there.

“It’s in the courts,” he said. “It’s up to the courts what they’re going to decide. At that point, if you guys want to endorse me, you can. If you don’t, you don’t have to. I’ll be on the line. You can’t change what has happened in the past, and all we can do is look forward to the future. If I win the candidacy or if this thing goes my way, and you’re not going to support me, then you are going to have a Republican candidate because you guys are going to split the vote.”

Committee member Emily Saunders criticized Morin for not being prepared to defend his candidacy. “You were just given the opportunity to speak before us and lay out your stump speech,” she said. “What do you say when you go door to door?” She also told him that the signatures he obtained going door to door had guaranteed him a place on the ballot in a primary election, and pointed out that he jeopardized that contest by filing the suit.

Kuhn also pointed out that Morin could drop his half of the lawsuit at any point if he truly wants to compete against Wagoner in a primary. “It’s really up to you,” he said. “And up to George.”

Wagoner got up and spoke briefly about his background and mentioned that he had submitted his name for the position of Highway Superintendent twice in the past, but that he ultimately capitulated to Gregg Sagendorph and then to Meredith. In response to a question from a committee member about how he would address problems within the Highway Department, Wagoner said that he was hesitant to identify any specific course of action until he had familiarized himself better with the role of Superintendent, but that he is aware some employees have had complaints.

In the subsequent vote, members voted to support Wagoner in the event of a primary 51-1. Two abstained.

Coffey made his case, saying he feels he’s the best candidate to win against Republican candidate Jim Foster, who lost the last race for Town Supervisor by just a handful of votes, and highlighting several town issues he feels are important to residents and the town’s future development. Harder then stood up and said, because he worked his “ass off” to gather signatures to appear on the ballot, he believes he is the “only viable candidate to be endorsed by the committee.”

The committee then voted to support Coffey 48-3, with two abstentions.

Shortly before the two-hour meeting ended, Harder introduced a motion to have the BDC executive committee withdraw their appeal of the Aug. 1 decision and leave Morin and Harder as the only Democrats on the Democratic ballot.

“I’m not going to be in favor of that,” said Kuhn. “Especially in light of what just occurred.”

The motion, unseconded, was never voted on.

“I am humbled and gratified to have received the endorsement of the vast majority of the members of the Bethlehem Democratic Committee,” Coffey told Spotlight News later in an email. “I look forward to the appellate court reversing Judge Mackey’s order on August 24 and allowing me and Giles an opportunity to compete in a September 12 primary. My lawn signs are going up this weekend and I look forward to meeting with Bethlehem residents to discuss their issues of concern.”

The committee expects to learn whether their appeal has been successful by Aug. 25. Whether or not the committee secures a primary, the full body will meet again Sept. 14 to consider what the outcome means for the general election and how to proceed.

A game of flag for Niko DiNovo, who has one more surgery before rehab

Going to the gym at Elm Avenue Park