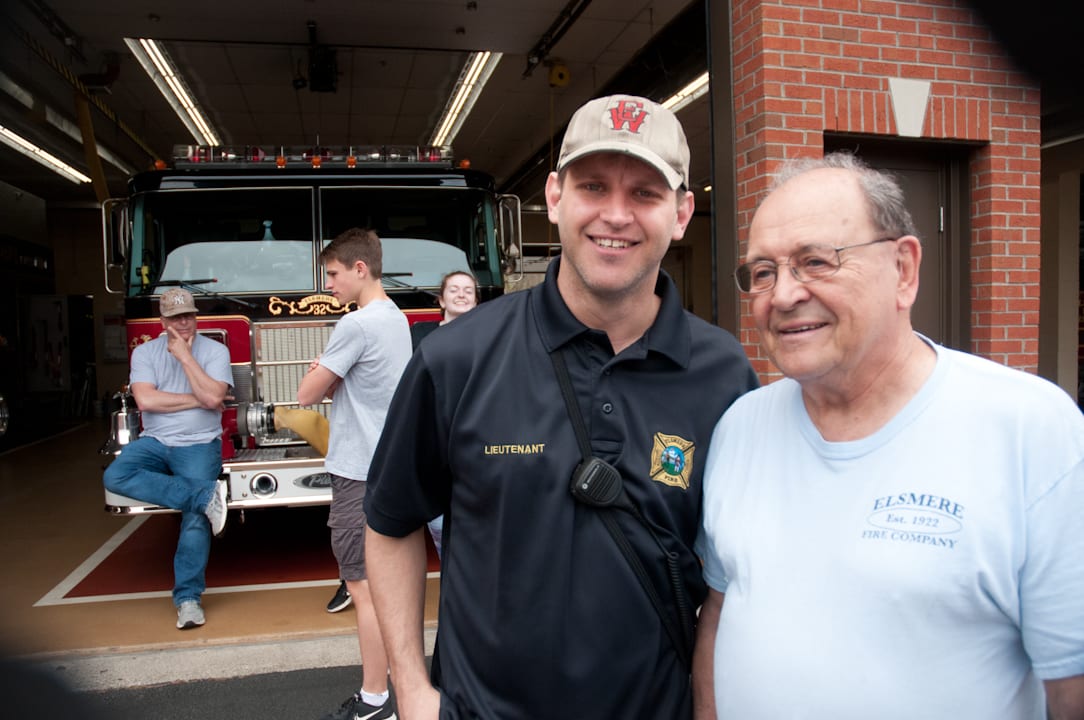 Lt. Michael Moon stands next to Wayne Johnson, a 56-year member of Elsmere Fire Department. Both were on hand as their firehouse opened its doors to the public to entice new recruits. Photo by Michael Hallisey / Spotlight News

ALBANY COUNTY — There was a time when a volunteer fire department was known as more of a clubhouse, a place for the boys to watch the game with a keg always on tap and once in a while answer a call to put out a fire or pump out a flooded basement.

Nowadays, while the social aspect is still a component, just to become just a basic firefighter through the state requires 109 hours of in-class and hands on training. And Firefighter I training can lead to other training in preparation for automobile accidents requiring extraction, search and rescue, confined space rescue, water rescue, hazardous material incidents and a host of other emergency situations.

The pay, though, hasn’t changed.

“Personal satisfaction,” said John D’Alessandro, the Firemen’s Association of the State of New York secretary when asked what volunteers get in return for their time and energy. “There is a little bit of a tax break in some of the counties but there is nobody doing it for any economic gain. There is just the personal satisfaction of helping your family and friends.”

That’s basically the reason 24-year-old David Deyo gave for signing up at Midway Fire Department on Saturday, April 29, during a weekend long, statewide effort to get more volunteers called RecruitNY.

“I want to help the community and it seems like a very interesting job,” said the Colonie native after interviewing with one of the assistant chiefs. “I thought about it in the past, when I was I college, but I really didn’t have the time. Now that I’ve graduated I thought it would be a good thing to do. My fiancé is training to be a nurse so we both have an interest in helping people.”

The initial training commitment and the ongoing requirements will be an issue for Deyo, and is the reason most give for the number of volunteers plummeting in recent years.

statewide. By the early 2000s, as state requirements became tougher, that number decreased to about 80,000. Last year, thanks to a federal grant that funded a four-year marketing effort to attract volunteers, the number was back up to 110,000.

But, while the number isn’t bad on it’s face, volunteers are called on to do more than put out fires and rescue cats from trees.

In the post 9-11 world, our firefighters spend more time training than ever before, learning how to respond to large scale incidents and how to handle complicated rescue scenarios in addition to house and business fires,” said FASNY Vice President John Farrell. “More firefighters are needed to meet the 21st century challenges.”

Volunteers don’t just run into burning buildings with hose in tow, they are called on for hazardous material remediation, water rescues, car accidents and EMS calls and answer a host of other calls as well.

There are two sides to that coin, though. A volunteer can take as much training as offered, or he or she could volunteer when time permits and help out with the never ending menial – but none-the-less necessary – tasks like washing trucks or cleaning the fire house which doesn’t require the Firefighter I course.

“It’s getting more difficult, the training requirements are harder and the time commitments are more challenging,” said Midway Fire Department Chief Robert Sammons, who has about 50 active and auxiliary members in the Central Avenue fire house that answers about 360 calls a year. “In addition to the calls you expect, we get calls for all sorts of things that nobody realizes. When someone doesn’t know who else to call they call us.”

The department held a grand opening of its new station to coincide with RecruitNY weekend.

Lt. Michael Moon, of the Elsmere Fire Department, said when he took the basic

firefighter class in 2005 it was 78 hours compared to the 109 hours Deyo will have to take. Once FFI is completed, Elsmere firefighters are required to make at least 20 of the 52 training sessions a year, six of the 12 monthly meetings and 10 percent of the annual calls.

“You do these things for free and there are a lot of challenges in terms of what classes and requirements you need and it becomes a struggle to maintain and retain your membership,” he said while at the Delmar fire station. “It is a lot of hours, and it’s a commitment and it is tough but once you do it once you are certified and you can take it with you.”

Moon’s father in law has been a firefighter since 1961 and his son is currently going through FFI training. He said Delmar is lucky to have four strong fire departments that all work well together while taking an average of just four minutes to get a truck out of the station once a call comes in.

“We are volunteers. We get a call when we are at home or grocery shopping and if a call isn’t answered in that time, it will get dispatched again,” he said.

Statewide, D’Alessandro said, if municipalities had to pay salaries and benefits for each of the some 110,000 volunteers it would cost about $3.2 billion. That represents, on average, a 26 percent tax hike, he said, adding 70 percent of the state’s fire departments are volunteer.

Colonie has 12 fire departments and some have their own taxing districts while others have contracts with the town. The taxes go for equipment and fire houses but not salaries or benefits. It would be impossible, said Supervisor Paula Mahan, to put a number on staffing all 12 stations with paid firefighters since they are an entrenched part of each community within the town that covers 57 square miles and has about 84,000 people.

“It would be awful hard to cover our entire town the way we do without the volunteers,” she said. “Years ago they were very much social areas but each year they take on different roles and are very much a part of our culture and our history and our community as well as a large part of how we provide public safety.”

Michael Hallisey contributed to this report.

TOP FIVE: The purchase of a bicycle