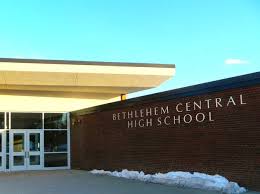 Bethlehem Police have been working closely with Bethlehem Central School District officials to address three incidents in which threats of school violence have been posted on various social media websites.

The nature and context of these threats caused concern to multiple students and parents, who came forward to both school administrators and the School Resource Officer.  Investigations into these threats were immediately commenced and police have determined that there is no imminent threat at this time.

Following investigation into each of the incidents, Bethlehem Police arrested three 15-year-old Bethlehem residents. The three juveniles were all charged with one felony count of making a terroristic threat and referred to the Albany County Probation Department. Due to their age, names of the defendants have not been released.

According to Bethlehem Police Commander Adam Hornick, each of the threats involved using a gun inside the school. Under law, he said, a threat can be characterized as “terroristic” when it is made against a population, including student populations. The threats were not directed at any specific race, religion, ethnicity, but at the school as a whole.

The Bethlehem Police Department and Bethlehem Central School District have said they are dedicated to the safety of all students and staff members, and to ensuring the safest possible learning environment. “We continue to work jointly in the sharing of information to continue this high level of safety and security for our school community,” said Hornick in a press release.

The Bethlehem Police Department will investigate and initiate the prosecution of any individuals for threats of school violence to the fullest extent of the law.

I am writing to inform you about the arrests today of two Bethlehem Central High School students by Bethlehem Police after it was reported the two had allegedly made remarks on social media threatening violence at the school. Last week, a third student was arrested for allegedly making a similar threat. Though these incidents were unrelated and in each circumstance police determined there was no imminent threat of violence, I am calling on parents, particularly in high school and middle school, to have an important discussion with students this weekend about using good judgment.

We have seen examples of students using good judgment in reporting these incidents to trusted adults. This morning, a student reported a conversation reportedly posted on Facebook to one of our high school hall principals. The hall principal notified the School Resource Officer immediately and the school and the police department commenced simultaneous investigations.

These two students were both charged with one felony count of Making a Terroristic Threat, and referred to the Albany County Probation Department. A copy of the police press release can be viewed here http://www.townofbethlehem.org/CivicAlerts.aspx?AID=597​

The school district, in its investigation, will follow disciplinary procedures in accordance with the school’s code of conduct.

Administrators at the high school have been meeting with high school students to explain the consequences that can occur if you make a threat against the school. However, it is important that this message be reinforced at home. Students need to know that it is never acceptable to even joke about threatening a school and that these matters are serious and will be pursued as such.

At the same time, please let your child(ren) know that if they see or hear of any type of threatening language suggesting violence against the school or other students to report it immediately.

We must work together to assure our students that maintaining a safe environment in our schools is, and always will be, our first priority.

As always, thank you for your cooperation in this matter. If you have any questions, please reach out me to me at [email protected] or by phone at 439-7098.