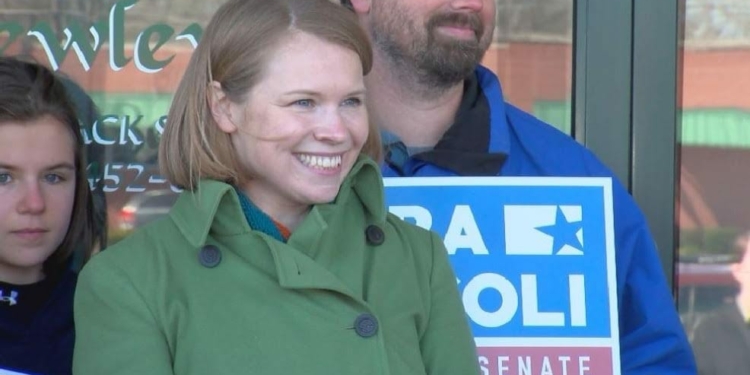 Sara Niccoli, the Democrat challenging George Amedore for New York’s 46th State Senate District seat, was recently named one of ten candidates endorsed by Bernie Sanders’ post-primary progressive political organization, Our Revolution. She is one of only three candidates endorsed by the group in New York state, along with Assembly candidates Zephyr Reachout in the 19th district, and Anthony Eramo in the 20th.

“Sara Niccoli is a farmer and advocate for working people running for New York’s state senate,” pronounced a fundraising email sent out by the organization’s Executive Director Sharon Jackson, which also endorsed nine other candidates from other states. “She’s running on a platform that will always put her community ahead of corporate interests. A victory for Sara would help turn the tide against the narrow majority in New York’s senate held by conservatives and corporate-backed politicians.”

“George Amedore opposes a woman’s right to choose, refuses to acknowledge climate change, and voted to extend the Common Core and high stakes testing,” said Niccoli. “I recognize that we must trust women’s choices, protect the environment for future generations, invest in quality education for all students, and revive the local economy by investing in small businesses and paying a fair wage. That’s why I’ve been named as one of the top ten local races to support by Our Revolution. I’m proud to have the honor.”

“Some of these candidates could help determine how congressional districts are drawn for the remainder of the next decade — a key to progressives gaining power in the House of Representatives for the decade to come,” wrote Jackson. “Others can use their offices to create real change for voting rights, equal pay, and economic justice.”

At present, Republicans hold power in the Senate. While party membership is evenly split, an independent caucus composed of five Democrats and one rogue party member, Simcha Felder, often side with their conservative counterparts.

“Through supporting a new generation of progressive leaders, empowering millions to fight for progressive change and elevating the political consciousness,” claims Sander’s organization, “Our Revolution will transform American politics to make our political and economic systems once again responsive to the needs of working families.”

Today’s housing market is good for both owners and buyers

Clubs on The Spot 518 for Thursday, September 22