Enviro impact statement to be drafted for proposed pipelines 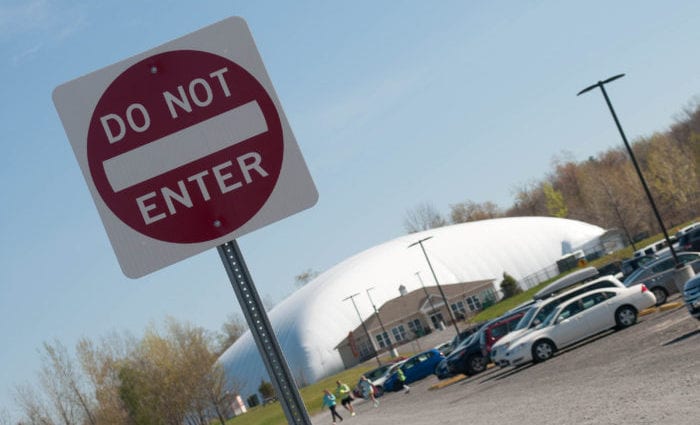 Pilgrim Transportation NY has proposed to build a pair of 24-inch pipelines parallel to the Thruway, each of which can carry up to 8.4 million gallons of oil daily. The pipelines will also run through the Bethlehem Soccerplex on Wemple Road, where 1,300 children are enrolled to play this year. Photo by Michael Hallisey/Spotlight

ALBANY — State agencies are taking the next step towards a pair of pipelines proposed to connect New Jersey and the Port of Albany.

The Department of Environmental Conservation (DEC), along with the New York State Thruway Authority (NYSTA), announced Wednesday, Sept. 14 they will undertake and prepare a draft Environmental Impact Statement for the highly controversial Pilgrim Pipelines project. A Draft EIS is an intensive and highly detailed review of a proposal’s impact on our climate, clean air, clean water, environmental justice communities and more.

When the initial application was submitted earlier this year to NYSTA to determine whether such a review was needed, the Cuomo Administration responded to concerns on the need for the DEC to take on co-lead status, given the agency’s responsibilities over our environment and public health.

The proposal calls for two, 24-inch pipelines to run through town, parallel to the New York state Thruway, and zig-zag through Glenmont and South Bethlehem as part of a total estimated 170 miles from Albany to Linden, N.J.

Pilgrim Pipeline states the proposal is meant to satisfy demand for the entire Northeast.

“The Northeast region of the United States remains one of the only major population areas in the country not served by a direct pipeline connection for delivery of refined products from refining centers to consumers, including gasoline and home heating oil,” as stated within the project description from Pilgrim Pipeline’s website. “As a result, the region relies largely on river barges, leaving it susceptible to severe weather events such as Hurricane Sandy. This combination can lead to major shortages of critical fuels – just when they are needed most – creating service disruptions and price spikes that adversely impact consumers and businesses.”

Each pipeline is reported to have the capacity to transport 8.4 million gallons of petroleum a day. One line would carry crude oil from the Port of Albany to refineries out of state. Refined oil products would return to the Capital District through the second pipeline.

Bethlehem’s town board members voiced opposition to the proposed pipelines back in May.

“As a matter of law, the state needs to conduct this review. But in practical terms, there is no way Pilgrim Pipelines pass New York’s climate test,” stated Conor Bambrick, air & energy director for Environmental Advocates of New York. “Through the 2015 State Energy Plan Governor Cuomo has boldly stated that New York is moving entirely away from fossils fuels by 2050. The project sponsors know this, but are intent on remaking Albany into ‘Oilbany’ and continue to push a project that communities along the route have rejected and that is completely out of line with New York’s cleaner, healthier future.”