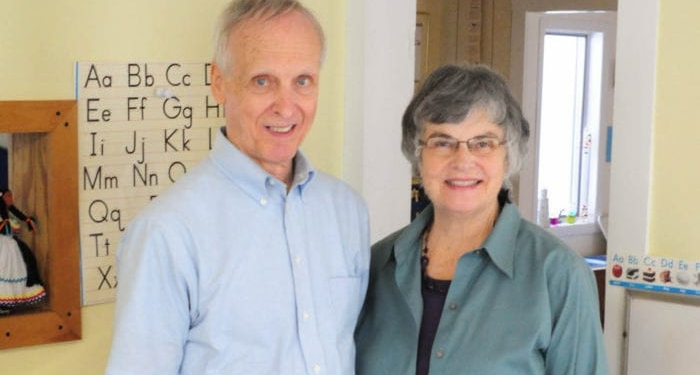 DELMAR — This Wednesday, after more than three decades and 1,200 students, Blossoms Montessori Learning Program will shut its doors.

Another Montessori program will step in when school begins again in September, continuing on a legacy for the converted two-story house at 56 Hudson Avenue started by Noreen and Gus Cadieux.

Retirement is a bittersweet transition the Cadieuxs approach together with a sense of optimism, much like they did when they started the school 33 years ago.

The school was Noreen’s idea. She had sought training in the Montessori method and was urged to start a school with their youngest child, Martin. Blossoms began in their family home in Slingerlands with ten students from the neighborhood. Interest in the program grew quickly and another location was needed.

The upstart from Slingerlands moved to New Salem before finally settling at the Hudson Avenue site. The first floor is devoted to the school. Each room is equipped for specific areas of learning. As with the Montessori method, children are exposed to tactile tools that stimulate the senses. Lessons are initiated through the student’s own natural curiosity.

Gus found the house on Hudson Avenue. The child psychologist’s woodworking skills were put to good use. He renovated the property so it could accommodate 25 students.

The Cadieuxs have always had a strong sense of community, the importance of which has been instilled into their three children, Rogean, Andre and Martin. In the early 70s, the couple and their two young children went to Honduras for three years, where they worked with abandoned mothers and children in a rural community. As all three approached their high school years, their vision of community embraced a broader global view.

“We’ve always tried to reach out to the poor in Central America,” said Noreen. She and her husband have established a foundation called “Friends of Latin America,” which will continue Blossoms’ educational outreach to a handful of Montessori schools in Honduras and Nicaragua.  As the two approach retirement, they said they are concerned they won’t be able to help as much as they have in the past — just an example of some of the things running through their minds as they approach the program’s final days.

A few days removed from their annual end-of-year picnic, where students and alumni gathered together for a potluck dinner, Gus and Noreen reflected upon the years.

“It was great to see so many of our kids using their gifts in their chosen careers, happy and flourishing,” said Gus. “It was heartwarming,” added Noreen.

Volunteering is a family tradition. Rogean, currently an architect in Memphis, served as a Peace Corps volunteer with her husband Jonathan in Jamaica. Their two kids recently attended Blossoms, allowing Gus and Noreen to teach their grandchildren.

“Noreen and Gus’ generosity of spirit and love for their work and the children they teach is amazing,” said Katherine Nadeau, a parent of one of the Blossoms students. “They’ve enhanced our community and given such gifts to their students. Our family and so many others I speak with are so very grateful for their love and dedication.”

Martin is an artist and doesn’t stray far from his parent’s path for education. For the past several years, Martin has taught English to immigrants for free. Noreen recalled a chance meeting with one of his former students as they walked through downtown Nashville. The former student stopped to thank his mentor for teaching him English, and to let him know he now has a job.

And, Gus and Noreen’s eldest son, Andre, who was also a Peace Corps volunteer in Morocco, is now a U.S. diplomat in Washington D.C.

That sense of community, “it does permeate our kids,” said Noreen.

A lot to be proud of: As many as 30,000 revelers are expected to attend the Capital Pride Festival on Saturday