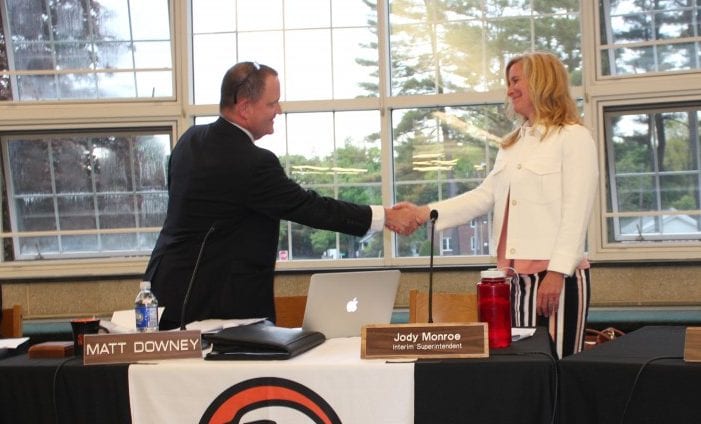 Bethlehem Central School District Superintendent Jody Monroe shakes hands with Board of Education President Matt Downey after being officially sworn in as the district’s new leader during the board’s meeting on Wednesday, May 18. Tricia Cremo/Spotlight

Members of the district’s Board of Education voted unanimously to approve Monroe’s appointment and conducted a swearing-in ceremony during its meeting on May 18.

Monroe’s annual salary will be $175,000 as part of an initial three-year contract.

After an extensive year-long search conducted by Capital Region BOCES,
the former assistant superintendent emerged as a clear choice among the candidates, according to School Board President Matt Downey.

“One of the most important roles we can play in life is to create a vision for an organization and work to explore the possibilities of achieving that dream,” said former Superintendent Dr. Michael Tebbano. “You, more than anyone else I have ever known, have displayed that outstanding quality.”

Les Loomis, who was superintendent for 25 years and hired Monroe to become principal of the middle school in 2005, also praised her.

“You have demonstrated the judgment, skill and personal sensitivity that characterizes the best of leaders,” said Loomis. “In a district as accomplished as BC, it is not easy to take the quality of student learning and achievement to a higher level, but that is what Jody has done as a top instructional leader. Now, Bethlehem will have the rare combination in its superintendent of steady and wise direction, coupled with the drive and urgency to make BC students even more successful.

“Congratulations to you, Jody, and to all of BC. It’s a win-win all around.”

Point of View: Albany County law will save lives