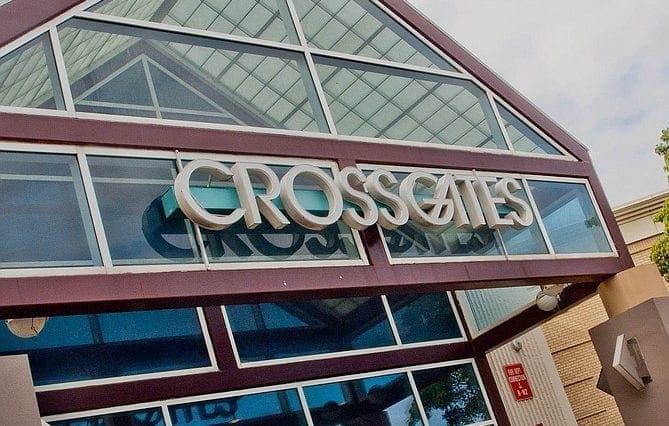 Since opening to the Capital District 30 years ago, Crossgates Mall has established itself as a major hub for area retail business. With approximately 20 million customers walking through its doors each year, it is among the most visited malls in the country.

Pyramid Management Group out of Syracuse opened the mall in 1984 and continues to manage the nearly 2-million square foot market space that boasts 84 unique shops, dining spots and entertainment centers. The mall conglomerate owns 17 properties throughout New York, Massachusetts and Virginia, including four of the 20 most visited malls in the country: Destiny USA in Syracuse, Palisades Center in West Nyack, Walden Galleria in Buffalo and Crossgates Mall.

High-end brands such as Coach, Williams-Sonoma, Vera Bradley and Michael Kors cater to an aggregate population of 870,000 people, with an average household income of nearly $75,000. These figures don’t likely include the more than 80,000 college students attending the 17 area colleges; a near captive audience from which retail stores can target for sales, and use for seasonal employment.

“Our vision is to create an enduring, forward-thinking and dynamic entrepreneurial organization,” states the organization’s website. “Our goal is to maximize the most successful portfolio of retail-based, tourist, and entertainment destinations in the northeast. Pyramid accomplishes this goal through innovative leadership, people and property development all while earning the respect of our retailers, lenders, vendors and the community.”

The page continues to read like a mission statement, striving to “continually develop an organization that: Embodies integrity, demands excellence, [and] encourages a balanced lifestyle,” among other things.

Many of the retailers hire for the holiday push at the end of the year, traditionally kicked off on the Friday following Thanksgiving, or Black Friday — to refer to the financial phenomenon to when stores shift from operating at a deficit and finish the year at a profit. But, the traditional start date to holiday shopping has changed in recent years, competing against sales lost to the Internet.

Brick and mortar stores first pushed into the early morning hours, but have since started opening their doors on early Thursday evening. Thanksgiving. A day local retail workers have coined “Greedy Thursday.”

In 2012, Crossgates opened its doors at midnight on Black Friday. At the time, all Pyramid Management Group malls were to open at the midnight hour. Last year, Crossgates required all its stores to open at 6 p.m. on Thursday evening, and to remain open until 10 p.m. the following evening.

Pyramid Management Group was approached for comment, but did not return our phone call.

Arthur Fudge is a 28-year-old retail manager at a store in the mall. He’s worked there for approximately five years, and he recalls last year’s mandate.

“What really angers me is they’re forcing us to stay open,” said Fudge. “There’s a difference to providing an option to stay open and threatening a fine if you don’t remain open. … I understand Crossgates has a business interest to remain open. They are a profit business.”

Big Box stores have helped fuel the trend to open doors earlier and earlier each holiday season. Anchor stores like Best Buy and Macy’s manage their own operations hours as they maintain their own entrances. Those national chain stores, Fudge said, are better equipped to man the 28-hour shift with additional staff. Fudge said the smaller, localized storefronts in the middle of the mall don’t hire additional help exclusively for the holidays.

Fudge started a Change.org campaign, gathering signatures on a virtual petition. It’s an effort to persuade Pyramid Management to keep all its malls closed on Thanksgiving, and “to remain closed for a reasonable amount of time for employees to enjoy the entirety of their holiday,” states an automated email sent to the top levels of the management group each time the petition is signed. All 800-plus, so far.

“When you ask stores to open at 6 p.m., you’re asking people to step away from their families on a holiday,” said Fudge. “If you drag business into the holiday, you’re just business as usual.” When consumers think of Black Friday, he said, they look towards the larger, national chains and not the “kiosks and children stores.

I don’t understand where they’re getting additional profits, said Fudge. “We’re not seeing the benefits.”

A Facebook community page called People Before Profits was created to update followers on the latest news.

Fudge said he’s received words of encouragement from fellow retailers and consumers alike over the past few weeks. There have been negative comments as well. Some of the comments, he said, come from smaller store owners who don’t celebrate the holiday and believe the extra hours help with their profits. But, he has yet to hear from Pyramid Management. Something he hopes will happen.

“I’d love to talk to them and have a conversation,” he said. “That would be awesome. … At the end of the day, it’s all about family. We can’t make a change without having a conversation.”