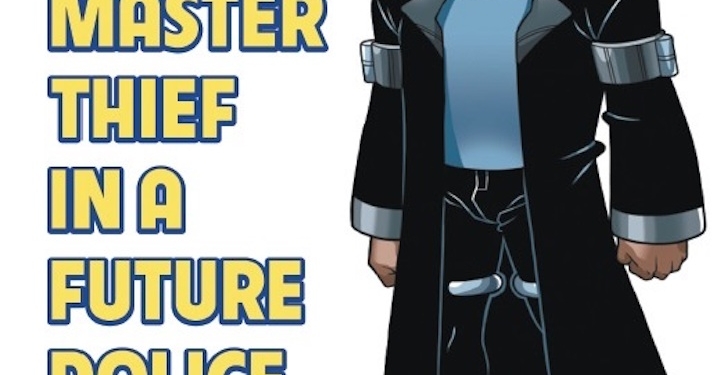 Editor’s Note: In earlier versions of this article, the first name of artist Paulo Peres was misspelled. CORRECTED Thursday, Sept. 8, at 12:36 p.m.

ALBANY — “By the time I was thirteen I figured out that I was never going to pitch for the Yankees!” quipped local comic book writer, editor and art director, Charles Santino, “but maybe I could write comic books.”

Over the past 35 years, Santino has succeeded in doing that. He started his career with Marvel and ‘Conan the Barbarian’. Now, for Markosia, the largest independent publisher in the UK, he is currently writing and creating a series based on the character of Rammur.

His upcoming book, “Rammur: The Corvus Trilogy, Part II” is nearly finished. “I hope to get that out by the end of this year.”

“With ‘Rammur’, I started from the notion of developing a character who is a master thief in a future police state. I had to create the character and his world from the ground up,” he said.

“One way that I thought to make Rammur and his future world distinctive is with technology. Rammur is the first anti-hero powered by clean energy-hydrogen,” he added. “In the future depicted in ‘Rammur’, hydrogen and fusion energy power everything, cleanly, efficiently and cheaply. But the world is still a police state.”

The lead Rammur story, which can be anywhere between 24 and 34 pages long, is followed by a shorter Rammur story and a ‘Tales of the Police State’ (TOPS) vignette in each issue. TOPS is a distinct comic taking place within the Rammur comics. These short stories depict the gritty reality of life in the comic book universe.

This layered worldbuilding is part of Santino’s process. Character development and careful planning are the driving forces of his upcoming additions to the Rammur universe.

“For Rammur, I do everything except draw, color, and letter the stories. I’m the writer, editor, and art director,” he continued. The main artist is Paulo Peres.

“I use the so-called “storyboard script” method to write the stories. I ‘draw’ the story in very simple, stick-figure layouts,” he explained. “This way I can tell if the story is going to work visually. Very few writers who are not also artists do this.”

This interest was born early on. Santino’s father gave him a copy of the DC Comic “Mystery in Space” when he was nine years old. He ended up being interested in DC characters, with Batman quickly emerging as a favorite.

“The real turning point came the year when I bought a Marvel comic that reprinted early Fantastic Four and Spider-Man stories,” he said. Within a couple of years, he was buying out almost everything in Marvel’s line. His interest only grew when he dug deeper into historical comics.

“I was reading Warren’s black-and-white horror magazines, underground comics, and back to DC for Deadman, Batman, Swamp Thing,” he added. “Eventually, I discovered the comics of the so-called Golden Age, published in the late 1930s to the mid-1950s.”

One comic book made a particular impression on him. “The comic book that impressed me so much that I knew I had to pursue writing comic books was the last issue of Marvel’s ‘Conan the Barbarian’ that Barry Smith drew, ‘The Song of Red Sonja’,” he reflected.

If someone had told him when he was younger that he would eventually work for Marvel himself, he would have “dismissed” the idea as an impossibility. However, by the 1980s, things changed for Santino.

“In the mid-1980s, Marvel editor Larry Hama bought an adventure story I wrote and published in ‘Savage Tales.’ I went on to write seven issues of ‘Conan the Barbarian’ for Marvel, and a parody of the Teenage Mutant Ninja Turtles for their humor comic, ‘What The–?!’”

Today, he has multiple projects in progress, with some on the horizon that are still “too early to talk about.” But Santino is excited for his next project, ‘Rammur: The Corvus Trilogy, Part II’, to be finished and available for reading and purchase.

When he thinks back on his career and what’s to come, what Santino enjoys most about his job is the combination of hard work and seeing the finished product.

He described some of the joys as “thinking up a story and getting it fleshed out, and staying excited by the story no matter how many times I read it. Being satisfied with the final product—the artwork, the coloring, the lettering, and the printed comic itself. Having people say they enjoyed something that I wrote.”

“I had someone tell me that a story I wrote got them hooked on comics,” he added. “It doesn’t get much better than that.”