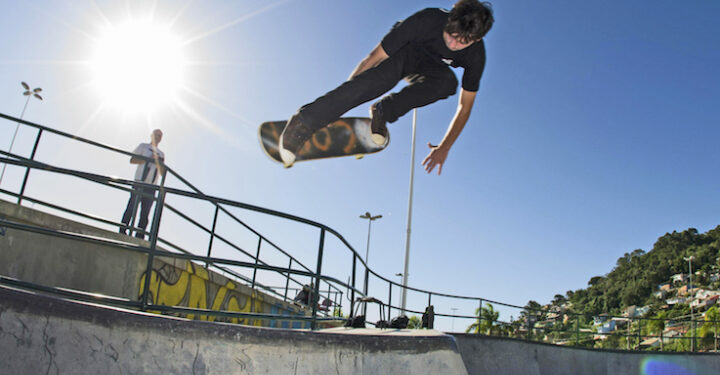 TROY – Can you imagine a skate park under the Hoosick Street Bridge?

The idea has been kicking around the Collar City for years but tonight will be the first time City Council will address the concept when it holds a public meeting at the River Street Market at 6 p.m.

“Discussions around the construction of a skate park have been ongoing for the last several years. Feedback and comments from neighbors, residents, and skaters will help assess the cost and feasibility of undertaking this project,” said City Engineer Aaron Vera.

The Hoosick Street Bridge has divided the city’s hillside communities and downtown residents since its construction was finished in 1981. Nonetheless, attempts have been made to marry the neighborhoods back together over the years.

The area beneath the bridge is the site of The Uniting Line, the city’s largest public mural project. Plans are already underway to include lighting and placemaking there to help encourage pedestrian traffic to the basketball courts and waterfront.

Adding a skate park under the bridge was identified in the city’s Hoosick-Hillside Study. The 2020 study was intended to field public feedback on how to connect Hillside residents with businesses in the city’s burgeoning downtown area. It’s a turnaround for a city that had closed its municipal pools just a few summers ago under the weight of debt dating back to the 1980s.

Talk of the skate park follows less than four months after the city finished paying off its $65 million debt to the Troy Municipal Assistance Corporation. The corporate governmental agency was established in 1996 to keep Troy out of bankruptcy. For 25 years, the city paid into a repayment schedule that involved annual checks of up to $7 million.

Mayor Patrick Madden announced last week that the City is exploring the possibility of commissioning a brand-new cast-in-place concrete skate park. Grindline Skateparks, the company selected to design the park, is a privately-owned company based out of Seattle, Washington.

The company has designed and built over 400 skateparks worldwide since it was founded by skateboarder Mark Hubbard and co-founder Dave Palmer in 2002. Their portfolio includes the 25,000-square foot Herzliya Skatepark in Herzliya, Israel and the North Houston Skate Park — the largest skatepark in the county – a 75,000-square foot park built in Houston, Texas.

Grindline Skateparks is comprised of “concrete craftsmen” who are former professional skateboarders. Their design process involves collaborating with local skateboarders and stakeholders.

The closest of Gridline’s projects includes an approved skatepark in Manchester, Vermont, where the town has as much as $400,000 committed towards a 12,000-square-foot park. The town of 4,200 people approved the measure prior to the pandemic. A visit from three-time Olympic gold medalist Shaun White inspired one resident to voice support for the park by means of a letter to the Bennington Banner.

Though not a skater, the author stated that he could see how “skating emphasizes individual style, improvisation, and relentless self-challenge.

“Skaters exist in community, watching and riffing off each other in a cool and slightly distant context, just right for the times,” he wrote. “Newcomers catch their breath while watching advanced local skaters demonstrate what’s possible with dedication and perseverance.”

The City Council meeting will be in person and streamed online via Zoom. The meeting link is available here. Masks are strongly encouraged for in-person attendees, regardless of vaccination status. Attendees will have an opportunity to provide feedback to help shape the final design of the proposed park. An online survey is also available for residents to submit information on the project at https://bit.ly/TroySkatePark.

“We are excited to explore the opportunity of constructing a skate park on Hoosick Street,” said city mayor Patrick Madden. “While this project is in very preliminary stages, input and participation from the community is welcome as we examine future options for new recreational amenities for Collar City residents to enjoy.”

The Cyclical Benefits of Mentorship