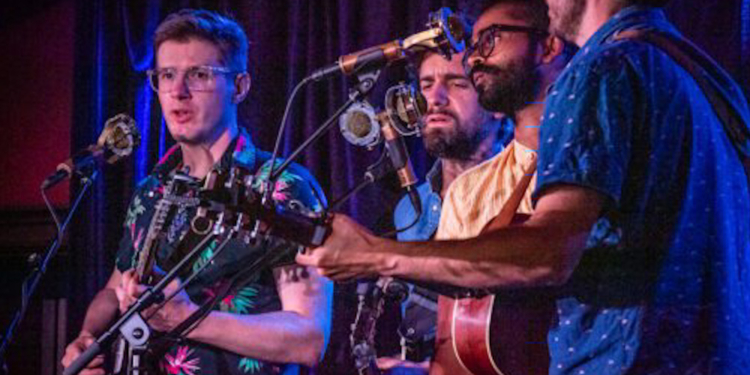 SARATOGA SPRINGS — Indie-folk band Darlingside filled Caffe Lena‘s seats to capacity Friday night in two sold out shows at the historic listening room. The lush sounding band can fill The Egg, and instead spent the evening with Caffe Lena fans in an intimate setting sharing favorite songs, charming humor, and lyrics that make everyone feel a little bit less lonely.

It was the first time since the pandemic that Caffe Lena has been at full capacity, and the staff did so mindfully. Audience members were asked to produce proof of vaccine and almost all wore masks as they stood in line to enter the hall. There was an excited hush about the group, many of whom shifted from foot to foot while waiting for the doors to open for the second show, Excelsior passes cued on phones, sweaters draping shoulders on the chilly summer night.

Darlingside promptly rewarded their patience with a beloved song: “God of Loss.” Slowing the beat and drawing out the lyrics, the band leaned into the melancholy words, drawing attention to their perfect harmonies. As with any good live performance, the song was both familiar and different. The lyrics emphasized how one can struggle to find oneself while also honoring one’s family and culture, and the band members’ goosebump raising vocals pulled the room’s full attention.

Moving through their set list with grace, the band played favorites “White Horses,” “My Gal,” and “Denver” with small talk in between. They took turns chatting about how they spent their year and a half during the pandemic, and while they joked, there was also reverence for how the arts were preserved by places like Caffe Lena.

Darlingside is a quartet of talented men who met initially at Williams College. Clearly deep thinkers from their lyrics, their chatter also reveals a goofy self awareness that they are really ordinary guys. Auyon Mukharji’s introductions of each band member followed his story of recently enjoying an ice cream sandwich. “It was special because it was exceptional…but it was also a surprise.” Somehow Mukharji turned this into an opportunity to talk about what food he imagined each band member could be surprised with, moving from Don Mitchell’s love of ice cream to David Senft’s enjoyment of coffee and finally landing with Harris Paseltiner’s love of breakfast sandwiches with crispy edges.

The juxtaposition of their normalcy with the magic of their sound increases the awareness for this writer at least that Darlingside has somehow bridged loneliness with music. During “Green and Evergreen,” the opening words “Through the oak and poison ivy/ As the lemon light was alkalining/ I was growing, I was dying/ Growing I was dying” caught me off guard. The beauty of the image and yet the depth of the reality that we all are, in fact, dying pulled me in deeper for a good listen.

Another spellbinding moment of the night was a gorgeous version of “Whippoorwill,” complete with a dramatic pause after “All your favorite time it comes from me.” The historic listening room was filled with people of all ages who were singing along, nodding and knowing the words, knowing the message.

Paseltiner added the cello to the band’s sound for the last few songs, including a mesmerizing “Orion” that recalled both chamber orchestra vibes with roots. The room could feel the band’s crescendo, rocking forward to the conclusion of the night that we hoped would never come.

After a climatic “Ancestor,” the band thanked the venue and crowd, which was on its feet clapping until they returned for a high energy “Blow the House Down.” The encore gave Paseltiner and Mukharji the opportunity to show they can really jam, and the band left on a high note of excitement.

I listen to Darlingside often; usually it is alone in my office while typing notes, or while resting after yoga. The experience of listening to them live with other human beings was more than simply synergistic, as we often reflect in these reviews. My sadness has been palpable recently, and often as is the case with sadness, I was wrongly believing I was alone in the experiences of dreading change, grieving losses, and wistfully wishing for something I can’t quite name. Darlingside and Caffe Lena reminded us all through the community of music that we are all yearning, stretching through pensive interiors and trying to reach out.

Darlingside’s magic goes beyond its lush sound. It goes beyond its tremendous talent on string instruments, and poetic lyrics. It is their connection to one another, their long friendship of awkward pauses, humility in owning mistakes, and clear love for being human that reawakens its listeners to life.

Kudos to Caffe Lena for bravely facing rising COVID 19 numbers to bring us Darlingside’s music just when we need it most.

This feature was originally published by Nippertown at nippertown.com.