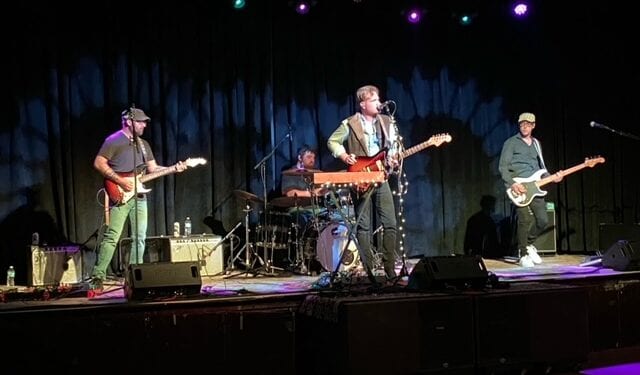 ALBANY — When I collapsed into bed at 10:30 p.m. after watching C.K. and the Rising Tide’s Saturday set at Lark Hall, I shed a few tears.

Live music is back. For the first time in 13 months, the light at the end of the tunnel seems to be getting brighter.

The four-piece Americana rock band, comprised of Curtis Flach, Matthew Copperwheat, Chris Brant and Rob Piccola, made a splash at Lark Hall with rocking tunes and a ton of fancy lights, which made photographer Ann Kielbasa’s job extra fun. Although the line-up has changed a bit since the band’s last live appearances — Copperwheat is back after a brief hiatus and keyboardist/violinist Danny Boudreau departed in 2020 — the local musicians didn’t miss a beat from the very first song.

I’ve always been a massive fan of C.K. and the Rising Tide. Its first release, American Romance, was an extremely strong release for a new band and its second release, Perfect Stranger, turned up the heat and solidified the band’s presence in the local music scene.

Saturday’s set was opened by Julia Alsarraf, whose smooth crooning and moody songs were a fantastic complement to the harder rock that was to come. Her single “Mixed Feelings” demonstrated the nuances of human emotion, with Alsarraf’s two band mates effortlessly providing a canvas for her to paint on. Alsarraf is no stranger to C.K. shows; she opened Perfect Stranger’s release show at Lost and Found Albany in 2019. She was a solid performer then, but time has only done her well, as her vibe and gorgeous voice is becoming more and more authentically her.

As the night wore on, there were plenty of mentions of the past year’s happenings. Many members of the audience hadn’t been to a live show since 2019, evidenced by an applause Alsarraf courted and questions Copperwheat asked. While the band was able to unmask, members of the audience were asked by Lark Hall to stay masked for the duration of the show. This didn’t stop the warm welcomes friends gave to one another and the lingering sense of hope as each song flowed effortlessly into one another.

C.K. started with “Drive,” a softer, sensual love song that was quickly offset by “Trigger Happy,” a rocking beat that is one of my favorites from the band. Although Perfect Stranger is still the new baby, it didn’t hesitate to break out some tunes from American Romance and even some songs that have yet to be released. The four-piece has teased an album could be coming soon, although details have yet to be announced.

Also, in typical Flach fashion, the banter with the audience was light and spontaneous. Compliments about a “sick motorcycle” and jokes with Lark Hall staff peppered Flach’s chatter with his band mates. Brant, forever a hat connoisseur, earned an applause for his black and white choice, while Copperwheat’s brown cap received a lukewarm recognition — something Flach teased him about.

As live music continues its inklings back into 518 culture, it’s clear what’s coming is going to showcase the improvements local bands have made during the quarantine. The evolution of Flach’s voice, and the confidence his band mates and Alsarraf have showed while on stage, showed promise for the new era of local music.