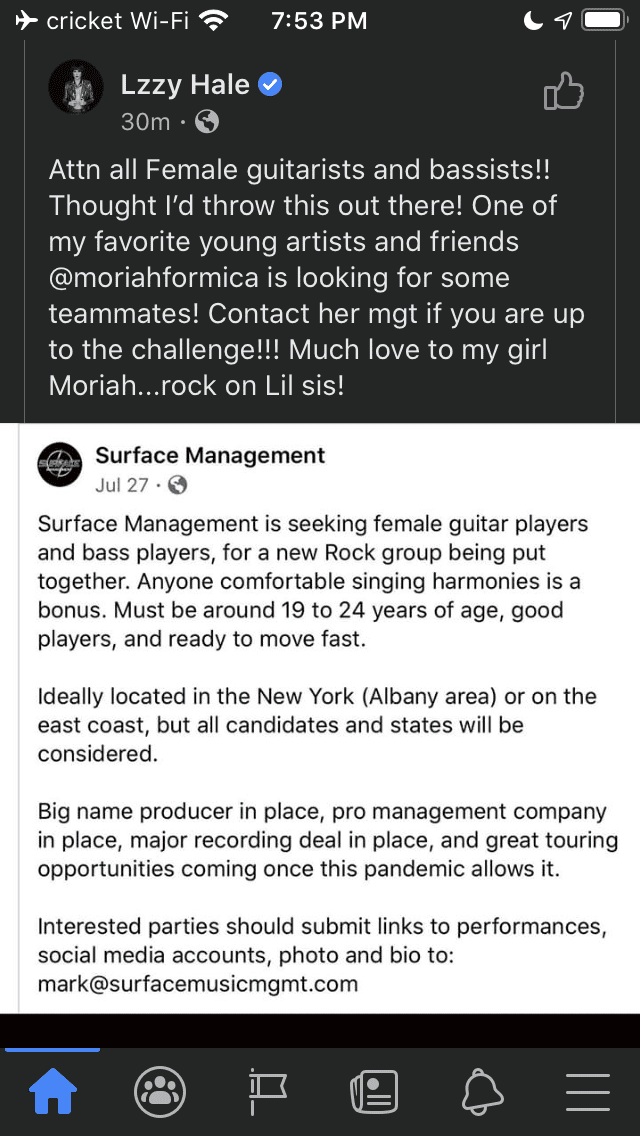 Since Moriah Formica signed with them in July, Surface Management has hit the wires recruiting artists to form an all-female rock group around her. They recently garnered a little help from a big name.

Halestorm’s Lzzy Hale has climbed the hard rock ladder since her band debut in 2009. Along with her brother Arejay, the group tours nearly non-stop. “Love Bites (So Do I),” the band’s lead single off its second album “ The Strange Case Of…,” earned a Grammy Award for best Hard Rock/Metal Performance in 2013. With the band’s success, Lzzy often shows support for other women trying to push up the ranks.

In 2018, Halestorm headlined a performance at the Albany Civic Center during a tour to support “Into the Wild Life.” Sharing the bill were playsets by New Year’s Day and In This Moment. All three bands featured a frontwoman.

The Hales dropped its latest EP “Reimagined” in mid-August. Just following the release, Lzzy took to social media to help out Formica.

“Attn all Female guitarists and bassists!” wrote Lzzy. “One of my favorite young artists and friends @moriahformica is looking for some teammates! Contact her mgt if you are up to the challenge!!!” She signed off her post with, “Much love to my girl Moriah … rock on Lil sis!”

The 19-year-old signed with Surface Management, a stand-alone management group recently created by Mark Nawara and Tim King owners of Pavement Entertainment. The Chicago-based group promises the ability to draw resources from the same record label best known for acts such as Candlebox and Puddle Of Mudd.

Surface signed Formica as one of its first artists citing her success from season 13 of NBC’s The Voice. It was on that television show Formica wowed celebrity judges with her cover of Heart’s “Crazy On You.” Most recently, she teamed up with drummer Brooke C. on another Heart cover, “Barracuda,” and the two recently streamed it on Facebook.

Since debuting their cover of “Barracuda” three months ago, the video has accumulated more than 4.6 million views. The two are now signed together in an effort to form an all-female group.

Brooke C. has garnered the attention of thousands showcasing her skills behind the drum kit. Last year, she featured her own cover of Living Colour’s “Cult of Personality” on Facebook. Since then, she’s amassed more than 140,000 followers on Facebook.

Surface is looking for someone who can play and sing harmonies. The ideal candidate is someone in the Albany area between 19 and 24 years old and “ready to move fast.” The burgeoning supergroup already locked in Grammy-nominated producer Johnny K for recording, and all the tools to head out and start touring — once that’s allowed.

The Surface roster also includes rock act THE OUTFIT, who recently had a Billboard Top 40 hit with their song “Soldier Boy,” and are currently climbing the charts with their new single “Come Alive.”

The company also represents the supergroup INTO THE FIRE, featuring members of The Union Underground, Evanescence, and SOiL.