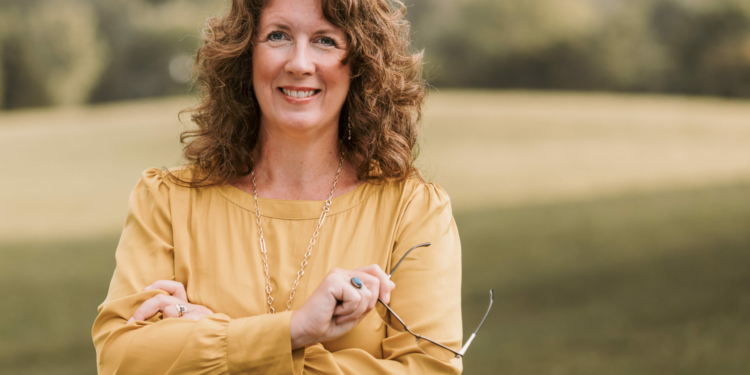 RAVENA — Sandra Flach is, above all, a mom.

The mother of eight — five through adoption — has her hands full at any given time. When she’s not tending to her large family, she’s involved in her church or working on her non profit, Justice for Orphans. The root of JFO, whose mission is to rally the church to serve children and families in crisis, is inspired by Flach’s own journey of adoption.

Flach is releasing her debut work, “Orphans No More: A Journey Back to the Father,” on June 15 wherever books are sold. The book touches on the adoptions of her children Andrii, Anna, Jordan, Slava and Missy. Andrii, Anna, Jordan and Slava are a group of siblings from Ukraine, while Missy is a family member who found herself in the Flach home after circumstances beyond her control.

“The journey of adopting our children was one where we had to have immense amounts of faith, especially in the eye of a government that is the polar opposite of what we are used to here,” Flach said. “There were many times [my husband] Wayne and I would be enveloped in prayer while in Ukraine, hoping for a sign from God that we were on the right path of bringing the kids home.”

Andrii and Anna were found abandoned together. Because Ukraine doesn’t have a foster system like the States, the siblings were thrown into the vortex of the Ukrainian orphanage network, where it isn’t uncommon to be separated from other siblings. That’s exactly what happened to Slava and Jordan; Andrii and Anna knew they had a baby brother somewhere in the country, but because Jordan was a baby, he was in an orphanage in another city. It wasn’t until Andrii, Anna and Jordan were about to depart Ukraine with Flach did they learn of Slava’s existence. Both Jordan and Slava were abandoned by their birth mother in the hospital. Even so, it took the Flachs a couple more years to finally bring Slava home.

A big part of “Orphans No More” centers around trauma-based parenting. Jordan and Slava were born with Fetal Alcohol Spectrum Disorder, which is common with babies who were exposed to alcohol in the womb. Flach said alcohol abuse is rampant in Ukraine. Slava’s symptoms are more intense than Jordan’s, which presented a challenge when he came home and was unable to function in the same environments as his siblings.

“When we brought Slava home, it was a whirlwind where each person in the family had to pitch in to keep him from destroying things or hurting himself,” Flach said. “All of the kids, but Slava especially, were in survival mode when they came home. When we first brought Andrii, Anna and Jordan back from the orphanage, I had to close the kitchen down after dinner one night because we had days worth of food they were inhaling in hours.”

Missy was a huge help to Flach when Wayne and her other children flew back to the United States. She’s had her own demons from the trauma she endured in her previous situation; Flach said her relationship with Missy wasn’t always roses. Missy’s own trauma-based behaviors resulted in the Flachs and her not being able to fully connect. It was only after the Flachs went through trauma training were they able to understand how their connection with Missy faltered and how they could better parent the siblings who came from across the world. Since then, the family has been able to grow a stronger bond.

“Trauma-based behaviors do not mean a bad child or a broken child,” Flach said. “Ultimately, behaviors are needs trying to be met. When we used to get mad at Missy, we’d ask her things like, ‘Why did you do that?’ or ‘What were you thinking?’ and it really ended up only making Missy feel worse. We didn’t understand where she was coming from and she was dealing with her trauma in the way she knew how.”

Flach said one of the biggest saving graces of the time when the family was going through the initial stages of growing was homeschooling. The Flachs have homeschooled each of their children at one point or another — when Slava first came home, this was a huge help as Flach could work with the older kids on a school item and the younger ones could keep him occupied.

“Slava has been the one most affected by COVID-19 because he needs that routine that school pre-pandemic brought him,” Flach said. “He disclosed to us he was terrified of us getting COVID-19 and dying, which would leave him abandoned again. Even with him knowing we are his family and we aren’t going anywhere, the trauma of abandonment is one he still struggles with. The masks only served as a reminder of this demon he felt was a threat to his family. We ended up taking him out of school and homeschooling him so he could keep as much of a normal life as possible.”

Ultimately, Flach acknowledged she couldn’t have navigated the waters of adoption without her deep faith in God — her belief in unconditional love and purpose is something she showers on her family each day. “Orphans No More” is filled with passages from the Bible and references to the religion she holds dear.

“As a woman of faith, I try to channel my beliefs into my life,” Flach concluded. “My husband was the first one to show me God’s love. That discovery has helped blossom every part of my life.”

For more information on Justice for Orphans, visit sandraflach.com.