COVID sends music journalist back to his baseball cards 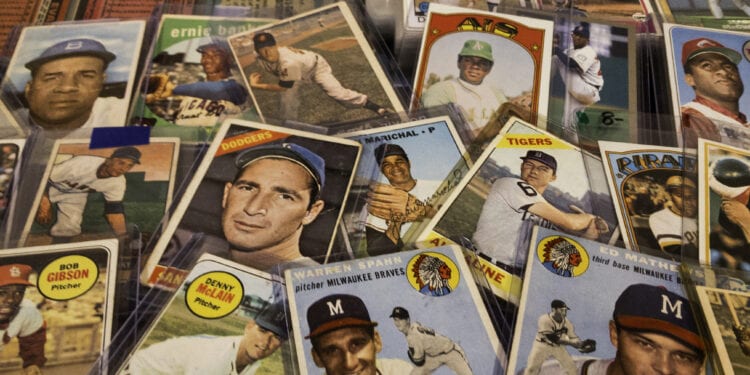 The lull in conversation that wanes as my wife sets up for her workday affords me the opportunity to scroll through eBay. It’s a routine that has developed over the months we’ve sequestered ourselves inside our home to avoid catching coronavirus. We each start our days at 6:30 a.m. While she sets up her laptop and paperwork at the dining room table, my start is less evident. I’m on the couch, reading the day’s news on either my laptop or phone. Sometimes, however, I cheat.

Our new norm also involves guiding our 7-year-old daughter through her distant learning schedule. Second-graders have a propensity for yelling out of turn during class. The habit is exacerbated by online conference call involving 20 more students and her teacher. It’s jarring when you’re trying to interview someone for an important article. Having them over as unexpected guests in your home is another issue. My daughter’s teacher may or may not have caught me wearing nothing but my bath towel the other day. So, there’s that, too.

Like everyone else, virus-related shutdowns have altered my way of life. Each Tuesday, I’d look through the calendar to plan a night at a live show to capture pictures for The Spot 518. My intent for each show would be to capture the mood. If I could catch John Drabik standing on his toes as he squeezes a few more notes from his guitar, or the strain on Arielle O’Keefe’s face as she belts out the words to “Heavy Heart” to a crowd stunned in silence, then I did my job. But, I’ve gone months without seeing many faces, let alone theirs. These are the connections I’ve developed over the years, and I miss them.

Depression and anxiety associated with this virus are both tangible things, enough so the Center for Disease Control has a webpage devoted to sharing resources and words of encouragement. The obstacles presented in my life contrast against the people who I have met covering the scene for the better part of a decade, so I dare not complain. I will, however, allow myself to voice my lament over not seeing them. Nonetheless, we’ve all had to make adjustments, and with such change comes the need to cope.

Outside of my TikTok watching habit, I reopened my eBay account. Prior to this year, I may have bought five items in as many years. The most recent of those items were vintage Sports Illustrated posters. There was once a time when I wanted to be a baseball player. So, when I was a kid, all my heroes wore numbers on their backs. Two years ago, I scored a Michael Jordan poster for $3.25. Somewhere between then and now, ABC aired a mini-series about him, and now everything with his name on it is worth more money. Today, my poster sells for 20-times more. Sports memorabilia is mainstream again.

I’ve retained my childhood card collection, a behavior my wife does not understand, especially from a man of my age. I ignore that last part. Instead, I explain to her how they are all connected with a dream I once had. As I got older, and the players started to look my age (or younger), I stopped. But, as I write this, I’m sitting on a bid for a 1954 Bowman issued Omar Lown baseball card. A few hours ago, I didn’t know who Omar Lown was, but I proceeded to read his story on the back of the card.

Tom Nardacci and I started chatting online about his baseball card collection back in the spring. The CEO of both Aurelius Coworks and Gramercy Communications is a busy man, but he’s a recovering ex-jock with a love for baseball. He shared a few images of his cards and the stories behind the players that he fell in love with. The players were of a day in which time has forgotten all but a few whose names are now etched in a plaque in Cooperstown. Rediscovering those stories was something to which I could relate. I rekindled my writing career while researching a semi-professional baseball team that played locally before the Great Depression. Those stories brought the past back to life. Oftentimes, leafing day after day through daily newspapers a century-old would transport me back in time.

Omar “Turk” Lown was predominately a relief pitcher for the Chicago Cubs in 1954. He’d later move Southside to play for the White Sox. According to baseballreference.com, he managed an 11-year career during a time when relievers weren’t sexy. I’ve spent the past several months buying cards of Sandy Koufax, Roy Campanella, Bob Gibson, and others whose playing days ended before I fell in love with the game. Mickey Mantle. Willie Mays. Bob Feller. Sexy. But, who was Omar Lown?

From what I first gleaned from the back of his card, Omar Lown was once a strong-armed catcher and outfielder from Brooklyn where he attended Franklin Lane High School. He’s not listed among its notable alumni on Wikipedia, but John Gotti and DJ Spinderella both are. Nonetheless, he grabbed the attention of the Brooklyn Dodgers after striking out 17 batters while playing semi-pro ball. This thin piece of cardboard, with a colorized portrait of him, caught at the end of his pitching delivery, best captured his story in nine lines of text. Included in that text was the name of his semi-pro team, the Ridgewood Bears. Ridgewood is my mother’s hometown.

Ridgewood is a part of Queens. It was a neighborhood of mostly German immigrants, a few of which were my great-grandparents. They owned one of the many rowhouses that distinguished Ridgewood from Brooklyn. My cousin and I would marvel and laugh at the grotesques carved in the stone facade above each window. I remember my uncle teaching us a baseball-themed game. It involved one of us throwing a racquetball against the stone steps leading up to the front door while the other stood in the street to field.

Aside from being five miles away from where Ebbets Field once stood, Ridgewood also played a part in a well-regarded semi-pro league. Omar’s Bears played in the Queens Alliance, a league that boasted more than 100 teams before World War II. The professional teams in the area kept tabs on their games. According to baseball historian Adam Ulrey, they even purchased uniforms and equipment for a few of the teams. It produced a handful of major leaguers, including Lown and Hall of Famer Phil Rizzuto.

Assuming I win this auction, Omar will join my collection along with other names time has forgotten. Eddie Stanky — a diminutive second baseman whose unwillingness to walk away from a fight earned him the name “Brat.” Snuffy Stirnweiss — a Bronx kid whose moment in the sun came after Rizzuto went off to serve in World War II. Al Rosen — another fighter who once stood in front of an opposing team’s dugout to challenge the coward who called him a “Jew bastard” as he sat behind the anonymity of a team bench. These stories draw tangible connections. There’s a thin veil that separates the dreamers from those fighting to make a dream come alive. It’s those kinds of people who inspired me to write again.

My mother passed away a few years ago, and it still affects me at times. To help me through, I sometimes read up on Ridgewood. I’m familiar with the area and had visited several times as a kid. But, finding new things about where she grew up helps draw a connection to her. Omar Lown is another one of those connections.

So, now I sit on a $1 bid for a card of a baseball player who I never knew, until now.

Normanside installs simulators to bring golfers in from the cold