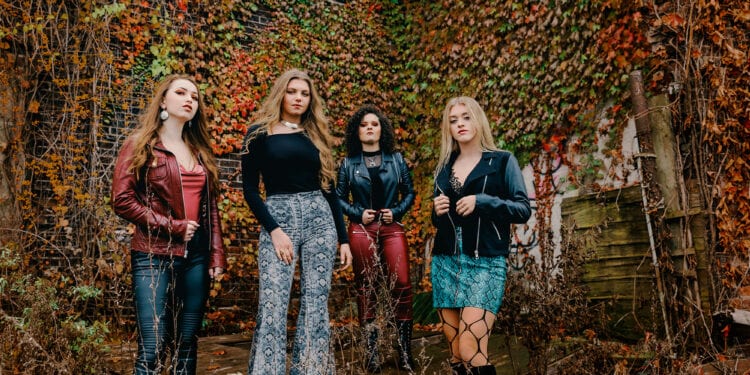 EDITOR’S NOTE: This article has been updated to reflect the number of views for “Barracuda,” with numbers from both Formica’s and Colucci’s social media accounts.

In a nod to the women rockers she admires most, pint-sized powerhouse Moriah Formica’s new band holds promise to bring rock n’ roll back to its heyday.

Formica, the 20-year-old force who has made appearances on “The Voice,” “American Idol,” a wide swath of stages across the Capital District and even performed with Joan Jett and Halestorm, is flanked by Bella Perron, 18, Ashley Suppa, 18 and Brooke Colucci, 17. All three have earned recognition in their own right; bassist Suppa has recorded with former KISS guitarist Ace Frehley, lead guitarist Perron is a student at Berklee College of Music who posts technical guitar riffs and Colucci’s drum covers on YouTube draw in massive amounts of views. Colucci and Formica recently released a cover of Heart’s “Barracuda,” an effort that quickly garnered over 7 million organic views and still growing.

“I think the vibe here is so much different than any other band I’ve ever been part of,” Formica said. Colucci, Suppa and Perron agree — while all four women are no strangers to creating with friends and fellow musicians, they’ve found chemistry with one another and a determination that they know makes this the real deal. “We’re able to be goofy and be ourselves while still maintaining the professionalism that makes us the musicians we are.”

That stark contrast is how they were able to finalize the name Plush. Perron joked how the women look super sweet and soft when you see them, but they want people to feel the intensity when the curtain rises.

“Rehearsing together has been amazing so far because we all have this ability to understand what we want and within three runs, we have it down,” Perron said. “We’re not competitive. It’s just a super positive space where we’re able to create and dial in on our music.”

Formica said it’s nuts how the band was finally comprised; while she, Colucci and Suppa had mutual connections, Perron found the group through a post Lzzy Hale, the lead singer of Halestorm, made when she heard Formica wanted to form an all-girl band. Perron reached out, Plush’s management company, Surface, connected the women and as Suppa said, “the rest is history.”

What separates Plush from the rest is that dynamic. Despite the immense talent, a few minutes of conversation reminds the listener these are young women. As the interview progressed, Perron mentioned she was from Maine and I mentioned my favorite chocolate shop up that way, which features a 1,700-pound solid chocolate moose display. I shot a picture to Formica via text and the girls elated at the thought of visiting the moose — a road trip to see Perron (and selfie with Lenny the chocolate moose) already in the works. They also prodded me to ask Formica about Patrick Star, which sent off a hilarious rant about why she can’t stand the character’s “annoyingly stupid” ways. As quickly as the spunky conversation started, they were back “on,” describing what they’ve been up to since they finally finished bringing people on.

“It’s been so hard with COVID-19 because most of our rehearsals have been through sending recording tracks, plus with Bella in Maine, we really have to focus when we can get together,” Colucci said. “The past few times, it’s been Moriah sending us a song idea and then Ashley, Bella and I build around it. I definitely gravitate toward a unique drumming style with my fills and grooves, so I love getting to show that off as much as possible in our music.”

As the group prepares to release its first single, “Hate,” on Feb. 9, it’s already pondering a dream venue. While all have a set location — Madison Square Garden, TD Garden, etc. — they’re more excited at the prospect of playing to a live, interactive audience.

“We really just want to play for people who genuinely enjoy the music and can vibe with our energy and have fun with us,” Suppa said. “I want to introduce my peers to more rock music and bring it back to the forefront.”

As Blabbermouth released an article last week announcing the group, it was almost immediate that people questioned how legitimate the women are. As quick as the comments poking fun at the music came, ones flooded in with sexual innuendo — even more inappropriate when you remember Colucci is only 17.  One particularly incendiary comment was repurposed and is now the band’s group chat name, a notion of poking fun at what once tried to tear them down. While they’re still navigating the beginning stages as a unit, they’re all eyes on the same prize.

“I just want to inspire something bigger in those around us,” Suppa concluded. “It’s absolutely extraordinary to play with people as passionate as you are.”

January on track to being the deadliest month in Albany County