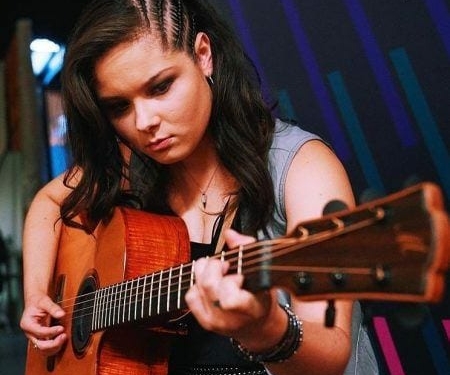 It’s no secret that a lot of the magic of rock ‘n roll lies in the effects. The lighting, the volume, the atmosphere is what makes a rock show special.

Moriah Formica is known for her modern, straight-laced approach to rock ‘n roll. The 20-year-old rock star performed a virtual show for fans last Wednesday. At any given time throughout the one-hour set (with several apologies for cutting it short due to the impending snowstorm that hit the area an hour later), there were at least 700 people viewing from all over the world; while many were from the United States, comments could be seen from Europe and Canada. The performance was streamed through CoverBandTV.

Formica decided on an original set, a refreshing change of pace from the covers that have garnered her viral fame. She decided to play her set in the order the songs were written, with the earliest one, “Lovestrong,” written at only 11 years old.

It’s clear that Formica has always been incredibly talented, but time has only served her well. While songs like “Back Off” and “Broken Soul” from Bring It On!, an EP she released at 14 years old, are impressive for a girl that young, her latest hits, including “Better Off Alone,” show the immense amount of skill Formica wields. Her originals now really sink their teeth into the complex emotions that encompass adulthood. She’s grown into a woman that takes no lip about the talent she knows she holds; when one commenter told her she wasn’t liking the show, Formica was quick to remind her the exit button was at the top of the screen.

For a woman that possesses an incredible force in the rock world, her stripped-down show grounded her and reminded us that she’s barely an adult and with that, she still has a grip on reality. I was thrilled to hear a few songs that were new to me — including “Time” and “Here’s My Heart” — and a spin on the ones I love, including “I Will.”

Of course, it wouldn’t be a Moriah show without a cover of Heart, and this time she opted for “Barracuda,” the last number of the evening. The whispers of Formica potentially becoming the next Ann Wilson are deafening from everyone in her fanbase, no thanks to her slam-dunk audition from season 13 of “The Voice.” As a huge fan, I still find joy in hearing her cover the music that’s helped her get to this point.

It’s honestly baffling that with her talent, her humility and her personality, she hasn’t been stolen from the 518 already.