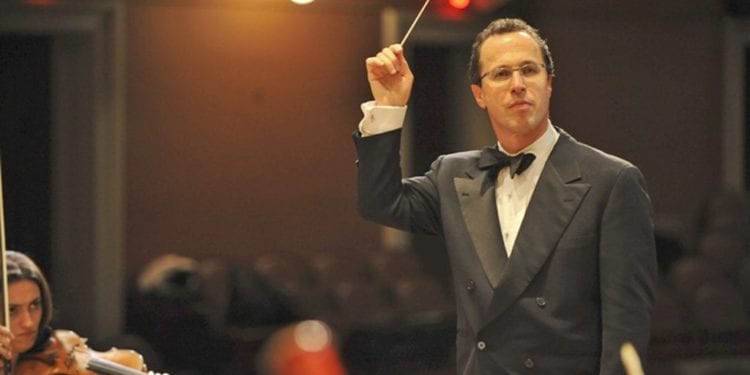 The Albany Symphony Orchestra is back, and this time it’s dabbling in current affairs.

The group, which is down to 15 members for this performance, will perform “Black and Alive” by Andre Myers, Debussy’s “Prelude to the Afternoon of a Faun” and Mahler’s “Symphony No. 4.” The show will be broadcast virtually from Universal Preservation Hall on Saturday, Nov. 14, at 7:30 p.m. Grammy-Award winning conductor David Alan Miller will conduct the performance. There will be a conversation between Miller and Myers at 7 p.m., followed by a post-show Q&A with the audience.

“Despite the different time periods when these pieces were written, I find they actually work well together because they all have this life-affirming quality to them,” Miller said. “I find Debussy’s piece works well introducing the modern era of music and is a great intro to Andre’s piece.”

Myers has had his works commissioned by the orchestra before. Miller said he was intent with working with Myers again this year — once the pandemic turned the group’s schedule on its head, Miller was happy to find a work that fit all the boxes he was looking for.

Myers describes “Black and Alive” as “Stravinsky meets James Brown,” and his proclamation of “I’m Black and I’m not dead.” Myers said he has spent much of his life under the radar, trying to convince others he’s not a threat and being as small as possible. “If there’s anything I’ve learned from this year, it’s that being not dead and being alive are two very different things,” Myers said.

Miller said “Black and Alive” is unique because it’s not narrative; there is no chorus or narration. In his words, it’s quite the opposite of the tumultuous emotions and events of 2020 — something Miller said drew him to the program.

“Andre has always said he owes as much to Stravinsky as he does some of the most prolific jazz singers in the industry,” Miller said. “I think this piece does a great job of demonstrating his skill and bringing something fresh to the table.”

The UPH performance will be as close as possible to normal performances, however, it’s obvious much as changed. Before the COVID-19 pandemic, the group was set to perform several sets at the Palace Theatre, where space could accommodate both a larger orchestra and a great audience. The pandemic has forced Miller to scale down the performers to 15 people at UPH, but promises those 15 will show the beauty that can be found in smaller numbers.

“Obviously, there have been a ton of fairly dramatic changes since the beginning of the year, and we still find ourselves having to adapt to the circumstances,” Miller said. “But what really inspired me was demonstrating the clearness and cleanliness of this small group of musicians. We want the show to be of gentle comfort to those who are in attendance.”