An Audience with The King’s Singers at Troy Music Hall on Saturday, Feb. 29 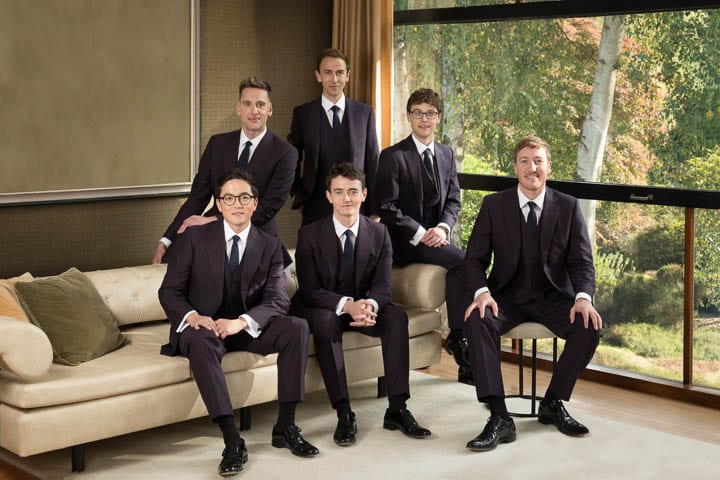 Acclaimed worldwide for its virtuosity, life-affirming energy and charm, The King’s Singers is in global demand.

The British a cappella ensemble, is synonymous with the very best in vocal performance, appeals to a vast international audience. Performing to hundreds of thousands of people each season, the group tours regularly to Europe, North and South America, Asia and Australasia. Instantly recognisable for their immaculate intonation, vocal blend, diction and incisive timing, the members of The King’s Singers are consummate entertainers.

This year sees the King’s Singers release their new album Finding Harmony, as part of a new campaign to harness the positive power of music to bring people together and effect social change. The recording explores the development of Western harmony over the last 800 years, celebrating music that has united different people all over the world, particularly in the face of oppression. The program covers eleven significant and iconic episodes of history, from the Protestant Reformation in Europe to the 2017 Manchester bombings.

The group is known for the flexibility and diversity of their repertoire, and this album brings together music from a range of communities, countries and genres to celebrate music from throughout history. Finding Harmony includes arrangements by a number of leading composers, including young British composers Rebecca Dale and Toby Young, Mexican composer Jorge Cózatl, South African composer Neo Muyanga, world-famous Scottish composer Sir James MacMillan, British singer and director Richard Wilberforce and Stacey V. Gibbs, one of America’s foremost arrangers of spirituals.

Michael Hallisey, The Spot 518: Your latest album includes arrangements from several composers, each from a different country and from a different culture. What kind of challenges are you presented with while singing such pieces?

Patrick Dunachie, countertenor in The King’s Singers: Our latest album is called ‘Finding Harmony’ and takes a look at a series of stories from throughout history all over the world where songs have played a key role in the course of world events. From over 1000 years ago up until the year we recorded it, we wanted to look at the sheer power that certain songs have had for communities facing unimaginable challenges. We decided on the project, in part, because we wanted to use our global platform as touring artists to tell some of these moving stories, and encourage people to think about what a valuable force singing is, at times when the world is fractured and divided. But one of the key challenges was to make sure that we were singing this music with authenticity, paying maximum respect to the people whose history we explore. This meant choosing composers and arrangers very carefully, making sure to collaborate with people who have experience or affinity with the cultures we had chosen. There were also the challenges of language — the album contains songs in 11 different languages and we were keen to make sure we sung the text accurately, no matter how difficult! And the final challenge was to capture the right emotion in our performances; many of these songs are highly-charged because of their social context, and we worked hard to find the right tone and energy to represent each song with the gravity it deserves.

The Spot 518: You all sing as one voice. How do you prepare as a group to achieve what you make appear so easy?

Dunachie: It’s good to hear that it comes across as one voice — this is the effect we’re often striving for, and it’s not as easy as it might look. Our sounding as ‘one voice’ comes from our ability to blend the sound of our voices together, so that none of us is sticking out from the texture, but everyone is audible. The ability to sound like each other develops through a few different means. One is the sheer volume of rehearsing and performing that we do together. We spend around 400 hours a year making sound together, and with that comes a musical bond where we know how best to sing with our neighbours on either side; we get used to their voice, their habits, their strengths, their weaknesses, and so we can work as a team with them to make a homogenous sound. In our rehearsals, we often spend time working on this ‘one voice’ effect by discussing the type of sound we’re making, and adjusting the tone quality, volume and vowel sounds to create this effect. As for making it look easy: the trick is learning to smile sweetly while your brain is working at 200 mph!

The Spot 518: Is the art of harmonizing dying in today’s world of technology?

Dunachie: Absolutely not! If anything, I’d say the art is getting stronger and getting more popular. Just yesterday, we were working with a high school choir in New Mexico, and after our workshop one 16-year-old man came up and told me that he’d only joined the choir 6 months ago, after stumbling upon barbershop videos on YouTube. The availability of high quality performances online, through streaming services, social media sites and YouTube, is making choral music and vocal harmony more accessible than ever, and feeding into choirs and a cappella groups all over the world. For those people who don’t have access to people around them with whom they can harmonize, technology today can enable people to sit on their own, and harmonize themselves using their phone or computer. Four-time Grammy Award-winner Jacob Collier is a perfect example of how one guy sitting in his bedroom with a computer can become one of the world’s great voices on harmony. However, as we tour the world, it is the sense of teamwork, community and communication that makes singing in harmony so special, and so important in what can be a lonely world.

The Spot 518: You will be performing at the Troy Savings Bank Music Hall which is praised for its incredible acoustics; are there any shows from memory in which you are amazed by the venue or audience, and can you describe that experience for our readers?

Dunachie: We’re really looking forward to being in Troy, and to sample these famed acoustics. I’ve only been in The King’s Singers for three-and-a-half years, yet even in that time so many venues and audiences stand out. The most magical concert atmospheres are often surprisingly modest ones. We have performed in Carnegie Hall, Washington National Cathedral, Royal Albert Hall and many other grand venues, yet my mind immediately goes to a concert we did a few years back in a small German town called Olten. We were singing in a small Lutheran church, to an audience of maybe 200 people, but somehow the atmosphere was electric — there was just enough light in the church to see the audience’s faces, and I remember getting shivers down my spine singing the renaissance motet ‘Versa est in luctum’ by Alonso Lobo, in the church’s warm acoustics. Somehow, the sense of intensity and focus through the whole concert made it at least as memorable as any of the world’s top venues.

The Spot 518: In light of the origins of these songs, what kind of lessons can society or your audience learn from these songs?

Dunachie: In Troy, we’re going to be singing ‘An audience with The King’s Singers’, which is a typically diverse selection of music. There will be something for everyone, no matter their musical background, and so we hope to introduce people to a few songs they might not ordinarily hear and perhaps encourage people to broaden their musical interests just a little. More widely though — particularly with our ‘Finding Harmony’ project underway — we want people to appreciate the profound power that music can have on people and communities. I hope that even a few of the songs on the album make people stop and think about the inspiration, the healing, the motivation, and sometimes the real-world change, that singing together can create, and to think about whether the world today could use some of that power.