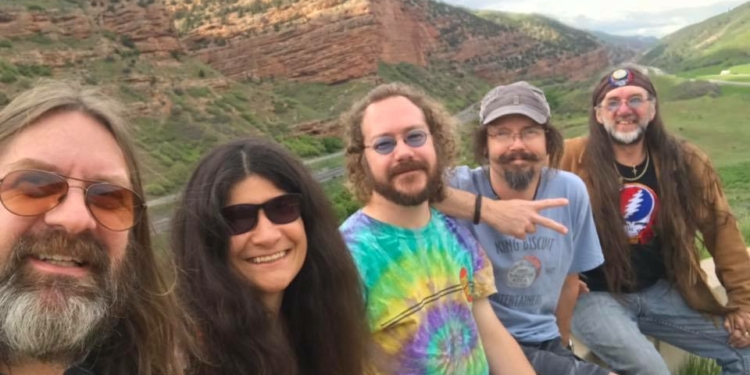 The Grateful Dead is everywhere.

Today’s undergrads have never lived a day with Jerry Garcia in it, yet you know damn well you won’t have to go far on any campus to find a window draped with a dancing bear. It’s a thing often explained away as a spiritual experience. When you speak of spiritual experiences, the conversational thread leads to religion. For many, it is a religion. The fandom for this music is absolute to many of the zealots we all call Deadheads.

The question is akin to one you would ask to test a fellow believer. Two followers of a secret order gingerly probing for equal footing before taking a leap of faith. A visibly benign question to reveal whether the stranger before them is, in fact, enlightened.

How’d you get on the bus? is the dowsing rod used to learn a stranger’s moment of understanding. It’s as telling as when your significant other asks, ‘When did you fall in love with me?’ It’s loaded with nuance because how detailed the answer reveals how deep you’re in.

Rik Bondy is in deep. He travels and performs with the Garcia Project, a renowned band that pays homage to the Jerry Garcia Band. When you drop the question on him, he can pinpoint the moment he fell in love with the Dead, and the moment that followed once he learned about Jerry’s band.

Bondy got on the bus in high school. His art teacher encouraged students to bring in their favorite music. He said he brought in Pink Floyd and Led Zeppelin. One day, a girl brought in a bootleg tape of the Grateful Dead.

“I listened to it and I was hooked,” he said. He soon followed with his first Dead show at Rochester’s Silver Stadium in 1987. From there, he said he joked with a friend, “Imagine if Jerry Garcia sang all the tunes.” From which he was educated on the Jerry Garcia Band.

As a fan, Bondy acknowledges that touch of nirvana. He said he would refer to a show as “Jerry’s church;” a chance to turn on, tune in and drop out from the world within a family environment. From the music, a community outside of everyday culture was born.

Not every fan prefers to be called a Deadhead. It’s sometimes perceived as a derogatory term because of how people connect the band with drugs. First, there’s no denying that, but the name is said to have come from Garcia’s own hand, with a finger hanging serendipitously over a dictionary. Phil Lesh wrote in his autobiography that Garcia found the name in an old Britannica World Language Dictionary with the phrase defined as “the soul of a dead person, or his angel, showing gratitude to someone who, as an act of charity,

arranged their burial.” And, not someone high on pot.

“There’s more to it than just the music,” said Rob Koritz, of Dark Star Orchestra, “there’s a scene that goes along with it, and I think that attracts a lot of people.”

The drug culture can’t be denied, and most fans don’t. It’s an act of futility. It was the 60s. The counterculture movement of the time was breaking away from the rigid conformity of the past. Like the divide between Baby Boomers and Millennials, those Boomers ironically wouldn’t trust anyone older than 30. And, just before the 60s rolled into the 70s, it all came to a head over the Vietnam War. Not to say every young man with long hair dropped acid; marijuana and acid were a few means many used to breaking away. The Dead’s early history is intertwined with the rise in LSD. Its earliest shows were at a Ken Kesey Acid Test. They were financially supported by Owsley “Bear” Stanley. Stanely was a genius. Not only did he create the Wall of Sound, he practiced chemistry. He was the self-proclaimed “King of Acid.” Bear’s lasting legacy, however, is the skull and lightning bolt logo he designed in 1969.

The Grateful Dead’s alchemy of bluegrass, jazz, country, blues and gospel was groundbreaking and serves as the backbone to today’s jam bands. So much so, when the Ominous Seapods started playing gigs in Plattsburgh, the band was commonly described as that band that sounds like the Grateful Dead. But, the solos commonly observed in bluegrass and jazz, with each musician in a band provided an opportunity to shine as an individual, is there. So is the noodlin’.

“The lyrics are timeless,” said Koritz. “When they were performed, even to this day, they are important words to live by. And, I think people attach themselves to that.”

Along every Grateful Dead show would be a small community called Shakedown Street. Named after one of the band’s albums, it was where fans camped out and found familiar faces, many of whom friends who chased after the band. Some in search of a “miracle,” a ticket to the show. Bondy referred to the community as family. His own miracle came in the form of the Scarlet Fire guitar, a custom built guitar by craftsman, Leo Elliot. He was lent the guitar three years ago, and he still plays while on stage.

Above all else, Bondy describes the scene as a place for charity and gratitude.

“The people who get it, get it. The people who love it, love it,” said Bondy. “It’s funny. We used to call going to see the Jerry Garcia Band as ‘going to Jerry’s Church.’ Because it was a spiritual experience. We had many spiritual experiences, awakenings and ego-deaths at a Jerry Garcia show. I’ve learned a lot from that whole scene and the process. We learned a lot from each other.”

Blackcat Elliot to drop ‘There Is No Good In Us,’ to throw CD release party at The Hangar