Synergia Dance Project tells a story with help from The Sea The Sea, Girl Blue and Dark Honey 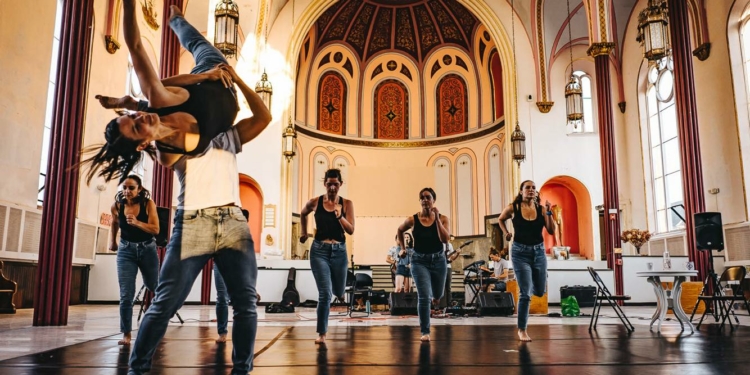 That’s what dance is all about. If you visit the Troy Dance Factory’s Facebook page, a cover video is shown of dancers executing a routine perfectly. The moves, seemingly easy to the viewer, is mixed with perfect coordination and cooperation between the dancers. For the dance company, this seems like a natural step.

Dark Blue Sea — an amalgam of The Sea The Sea, Dark Honey and Girl Blue — is a production featuring the three groups and Synergia Dance Project, a seven-person dance company out of Troy Dance Factory. Nadine Medina, the owner of Troy Dance Factory, based the show from the quote, “Together, I lost myself with you.”

Medina said the idea came from the ending of a long-term relationship. In the mix, she formed Synergia (synergy-a). The idea is to tell stories through collaborative means, such as choreography, live music and cinematic narratives.

However, this isn’t the first time Troy Dance Factory has partnered with a local group for a show. In December, The Sea The Sea, which is comprised of married duo Chuck and Mira Costa, visited the studio to talk to dancers about the inspiration behind their song, “All Go Right.” According to the band’s Instagram, the musicians and dancers were able to create something really beautiful.

“I really loved the process of working with [Chuck and Mira] and [Dark Blue Sea] kind of came from that amazing experience,” Medina explained. “One night I texted Mira and asked her about it and she was down almost immediately.”

Soon after Medina got the Costas on board, she was conversing with Girl Blue, aka Arielle O’Keefe, about another class idea she had. Medina admits she was nervous to pitch the idea about “Dark Blue Sea” to O’Keefe because they didn’t know one another super well. Luckily, she didn’t have to.

Dark Honey came later. When Medina first met the band in January through her boyfriend, who works at Chromoscope, it had about four songs out. Once Dark Honey agreed to join the show, it became a waiting game for new music it promised was coming in April. As the days ticked by and the band kept working, the days trickling into May, Medina was getting nervous. Would it work?

“One day I was kind of getting anxious because I had put so much blind faith that this would work,” she recalled. “I spoke with my team and one of them mentioned that we should allow Dark Honey, a group of men, to tell the story from a man’s perspective. Instantly, I saw how great of an idea this was.”

Luckily, once Medina heard some of Dark Honey’s upcoming music, her fears evaporated. She said she was able to pull some “truly beautiful pieces” from the album.

“Originally I kept this pretty open-ended and it’s evolved into this,” Medina said. “What’s amazing is how every single person on this team, which is around 20 people [if you count the bands, the dancers, Chromoscope and the venues] knows what they need to do.”

Getting to Helsinki Hudson was another natural progression. Medina said all three acts have already performed at Helsinki, so when she pitched the idea to the venue, it jumped on board almost immediately.
After renting out Cohoes Music Hall for the Friday after and one-night purchase from Proctors for the night before Helsinki, “Dark Blue Sea” has three homes.

O’Keefe and Dark Honey have been able to work closely in the area. Even though The Sea The Sea has been touring the country all summer, the couple has been in “constant” contact with Medina through text and calls. Medina said she will send something to them and they will respond as soon as possible with super intricate, valuable feedback. While they aren’t physically present, they’ve been every bit as involved as their peers who have been home.

“This is such an elevated experience from every single one of us,” Medina concluded. “You’ll be seeing us as you’ve never seen us before. I don’t think we’ve ever put out this caliber of work. We’ve all pushed one another to create something amazing.”

Troy Dance Factory is funded by donations, which help pay for overhead, stipends for the dancers and expenses. Donations can be made at www.troydancefactory.org.