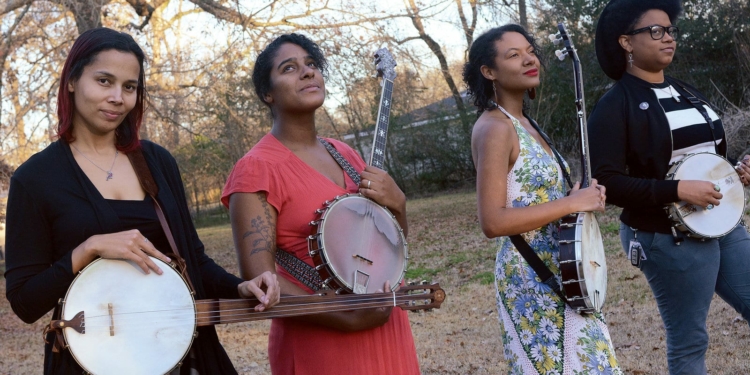 ALBANY — Musicians Rhiannon Giddens, Leyla McCalla, Allison Russell and Amythyst Kiah will perform as “Our Native Daughters” at The Egg on Friday, July 26 at 8 p.m. as part of the American Roots & Branches concert series.

Multi-Grammy Award winner and 2017 MacArthur Genius Grant recipient Rhiannon Giddens returns with her soul-stirring vocals and prowess on fiddle and banjo, performing a repertoire from her rich catalog of traditional and original music.

Giddens will be joined by three other leading ladies of today’s folk music scene – Allison Russell of Birds of Chicago, Leyla McCalla of Carolina Chocolate Drops and rising star Amythyst Kiah – to perform music from their acclaimed, ground-breaking recording, “Songs of Our Native Daughters.”

Pulling from and inspired by 17th-, 18th-, and 19th-century sources, including slave narratives and early minstrelsy, kindred banjo players Giddens, Kiah, McCalla, and Russell reinterpret and create new works from old ones.

With unflinching, razor-sharp honesty, they confront sanitized views about America’s history of slavery, racism, and misogyny from a powerful, black female perspective.

These songs call on the persistent spirits of the daughters, mothers, and grandmothers who have fought for justice — in large, public ways — only now being recognized, and in countless domestic ways that will most likely never be acknowledged.

Tickets to the performance are $45 and $40 and are currently available at The Egg Box Office at the Empire State Plaza, by telephone at 518-473-1845 or online at www.theegg.org.

SPOTLIGHT ON BUSINESS: Punkintown is a loved tradition in New Salem