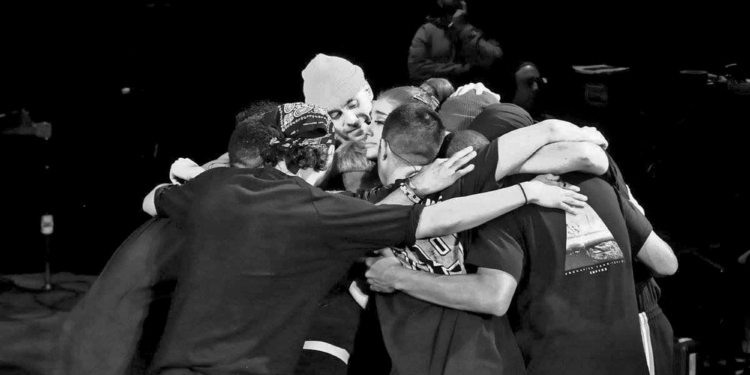 ALBANY — “We’re way too fly to partake in all this hate, we out here vibin’.” This memorable lyric from pop icon Ariana Grande’s 2018 hit single, “No Tears Left to Cry,” rang true during her opening night of her “Sweetener World Tour” at the Times Union Center in Albany on Monday, March 18. Positivity, gratitude and Instagram-worthy visuals dominated her concert, as she sang her way down the often-lit-in-pink stage, beaming as hundreds of fans harmonized along and danced with abandon.

It seemed that Grande was on top of the world as her cheeky retail-therapy-themed banger, “7 Rings,” reclaimed the top spot on the Billboard Hot 100 again for a sixth non-consecutive week the same day as she embarked on her tour. She also recently won her first-ever Grammy for Best Pop Vocal Album for 2018’s “Sweetener” last February. With an infectious blitzkrieg of dance-ready hits and soothing ballads, all may seem well for Grande.

However, reflecting back on the aforementioned lyric, this was her first tour since the Dangerous Woman Tour, which became infamous when a suicide bombing happened on May 22, 2017 at her Manchester Arena show, which left 22 dead and 139 injured in Manchester, England. For this reason, security to her Albany “Sweetener” concert was more pronounced.

Grande’s personal life also took a public nosedive when rapper Mac Miller, whom Grande dated from August 2016 to May 2018, died from an accidental drug overdose; Grande soon dated actor Pete Davidson later that May and got engaged in June, only to break it off later in October. Grande became the subject of much commentary on social media and the press as a result, including how there have been people who blamed Grande for Miller’s death and have ridiculed her for her swift engagement.

With these in mind, things did lighten up when she surprise-released her fifth album, “Thank U, Next” — just six months after “Sweetener” — which earned critical acclaim and broke streaming and music video-viewership records with her three singles, “Thank U, Next,” “7 Rings,” and “Break Up with Your Girlfriend, I’m Bored.”

Leading into the Albany concert, the stage featured two gigantic, planet-like orbs — one from the ceiling and the other on the stage’s central screen — and a V-like runway that jutted out through the arena’s floor. Many fans were decked in NASA-themed sweatshirts, a reference to Grande’s namesake song, knee-high boots and ponytails to copy her iconic hairstyle.

This being her first solo tour, Normani has since been gradually building her solo portfolio, with hits like 2018’s “Love Lies” with Khalid and 2019’s “Dancing with a Stranger” with Sam Smith. Known for her impeccable dancing abilities, her choreography always were fluid and jaw-dropping, staying in harmony with her fellow background dancers.

Speaking of harmony, she surprised the arena by performing a medley of Rihanna’s hits and offering Fifth Harmony nostalgic songs, like 2014’s “Boss,” 2015’s “Worth It” and 2016’s “Work from Home.” In fact, the concert was just one day before the anniversary of Fifth Harmony announcing its hiatus.

The concert began when the stage’s backdrop and central orb emulated an eclipse, combining visuals of a fiery sun and silent moon, while Grande performed the a cappella “Raindrops (An Angel Cried)” to prove again how she neither required background dancers nor instruments to excite an arena. The audience melted into a frenzied blur when Grande then re-enacted her 2018 MTV Video Music Awards performance with “God is a Woman” where she raised eyebrows with her impressive whistle notes.

Continuing with the sassy “Bad Idea,” she began traversing the V-shaped runway, giving fans an opportunity to see her up close, as she sang “Break Up with Your Girlfriend, I’m Bored” with some sinful choreography and playful winks. “Be Alright” came next with the same memorable vogueing routines from years’ past, followed by the more intimate “Sweetener” and “Successful” numbers.

Later on, the arena grew deafening when she performed “7 Rings” while the backdrop had similar pink house trap-like visuals like those of its music video. A pink graffiti-clad car also appeared onstage where she exuded confidence as she posed and looked unbothered while her dancers surrounded her.

The two large orbs offered magnificent imagery throughout the night, particularly during “NASA,” a crowd favorite, where planets, galaxies, stars and moons hovered all over the screens. “NASA” had been one of the most highly-anticipated songs before the album came out and since the Albany concert was the first time she ever performed it live, there was a grand catharsis as fans loudly preached its chorus and jumped simultaneously.

Songs like “Breathin,” “Fake Smile,” “Needy” and “Goodnight n Go” offered a more vulnerable side to Grande, taking a welcomed diversion from the show’s largely upbeat nature. “One Last Time” was especially poignant as it was a tribute to the fallen Manchester victims. Older numbers like “Love Me Harder,” “Right There,” and “Break Your Heart Right Back” showed how she had not forgotten her first two albums, 2013’s “Yours Truly” and 2014’s “My Everything,” which all felt so distant from now.

Grande’s personal life showed throughout the night too, like an interlude in the form of a scene from one of her favorite films, 1996’s “The First Wives Club,” featuring Goldie Hawn’s character who declared, “I do have feelings! I’m an actress! I have all of them!” There were a few clips of Grande performing and acting when she was a young girl, and Grande’s own brother and mother, Frankie and Joan, were attending the concert as well.

The concert felt like a diary which had recorded and adapted her life journey thus far into a musical spectacle.

The night would conclude with the joyful “No Tears Left to Cry” and the self-love anthem, “Thank U, Next.”

For the former, the backdrop featured animations of floating staircases and rising umbrellas while her dancers swayed gently with their own physical umbrellas, recreating the song’s trippy music video.

The latter began, after a chilling montage of how the song had made headlines for its subject matter and chart-topping success, with some technical difficulties though. Grande and four dancers rose from below the stage but she lacked a working microphone — the audience helped her out though by singing along to the lyrics as she eventually received a functioning one.

It has become an inside joke among Grande fans that she has not been able to perform this song without some mishap or getting too emotional. She had first debuted the song live in a November 2018 performance on “The Ellen DeGeneres Show” where she slipped after descending from a chair in heels, and she also messed up some of its lyrics during a rendition at the Billboard’s Women in Music event the month after.

After descending onto the V-runway one last time with “First Wives Club”-inspired choreography, she expressed gratitude to the audience before exiting the arena.

For an artist who has endured so much tragedy, drama and commentary from the media and public in the past few years, Grande seemed resilient and ready to continue entertaining audiences as her tour will spill throughout the rest of North America and Europe through October 13 this year.

While Albany fans may see her opening night concert as a way of getting up close to her, perhaps Grande saw this as the beginning of a road to reconnect with her love of performing and to let go of her demons from 2018 — a process that would happen on each stop of her tour.

And for that, we say thank you, next show.