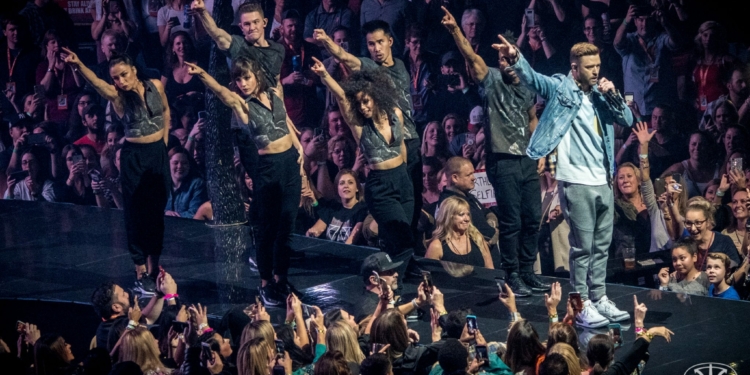 ALBANY — The screams and applause were deafening when veteran pop sensation Justin Timberlake and his band, The Tennessee Kids, first appeared onstage at the Times Union Center on Saturday, Oct. 20, a clear case of how his influence on the music industry for decades still has not withered.

There was some hesitation going into the concert as his latest album, “Man of the Woods” and his Super Bowl halftime show performance, both from this past February, have not been easy to digest among fans and critics. But Timberlake did not yield to naysayers as he confidently continued to dazzle the arena with a dizzying blitzkrieg of a lighting special, swoon-inducing dance routines, and childhood-harkening vocals.

Timberlake still had the slick moves of Michael Jackson, the irresistible charm of Gene Kelly, and the various musical talents that many current singers lack. In addition, his longtime catalogue of songs, memorable choreography and overall “good guy” charisma has maintained his appeal to viewers.

Starting his concert with “Filthy,” the rest of the night was anything but. It was quite evident how many audience members did not recognize most of the “Man of the Woods” songs that he performed that night, but they grew into an animated frenzy when familiar tracks like “SexyBack” and “Cry Me a River” came on.

While Timberlake’s current era’s image is that of being outdoorsy and being more in tune literally with the woods, his stage setup reflected that as the runway was populated with a few faux trees. Translucent screen slides frequently descended from above to show forest-themed visuals and there was even a campfire setting on one of the mini-stages.

Here, some of Timberlake’s onstage team sat around it and Timberlake himself redirected the spotlight, while playing the guitar, to four of his backup dancers who each sang a different song that was not by their boss. It spoke volumes on Timberlake’s part who gave those backup singers a chance to impress the crowd with their individual vocals. This intimate moment ironically perhaps was a such a powerful moment of the concert as Timberlake, often known for his bombastic performances, actively chose to lay back like the gentleman he was.

His putting-you-first-and-myself-second personality further shined when he saw a couple by the stage with a folded poster which housed a baby gender reveal. Taking it, he told the arena to start a drumroll.

“It’s a girl. Congratulations,” he grinned. “A baby girl, they’re having a baby princess, give them a round of applause.”

He also later paused his concert to shake hands with a young Albany woman named Ashley near the stage who had started and spread the #JTmeetsAshley hashtag from weeks ago across her friends, classmates and coworkers, in hopes of getting noticed by the man himself. Timberlake then walked up and shook hands with her, while the crowd cheered on.

The night continued with Timberlake boasting his usual swagger, dancing around a flexible microphone stand — similar to his Super Bowl performance — for “Suit & Tie,” with the graceful elegance of Fred Astaire, while he sported a relaxed grey suit with joggers and Jordans. “Mirrors” was another highlight where he encouraged the arena to loudly sing along with him, ending with him bowing and even getting on his knees as the applause raged on long after.

His raw sex appeal came upfront when he fluidly danced along to some of the original choreography to “Summer Love” and “Rock Your Body.” Ending the night with the infectious “Can’t Stop the Feeling!” to leave it off on an effervescent note, Timberlake proved his soaring vocals can still rock arenas even when his career in entertainment had first started way back in the late 1990s.

Spend some time this winter at Maple Ski Ridge