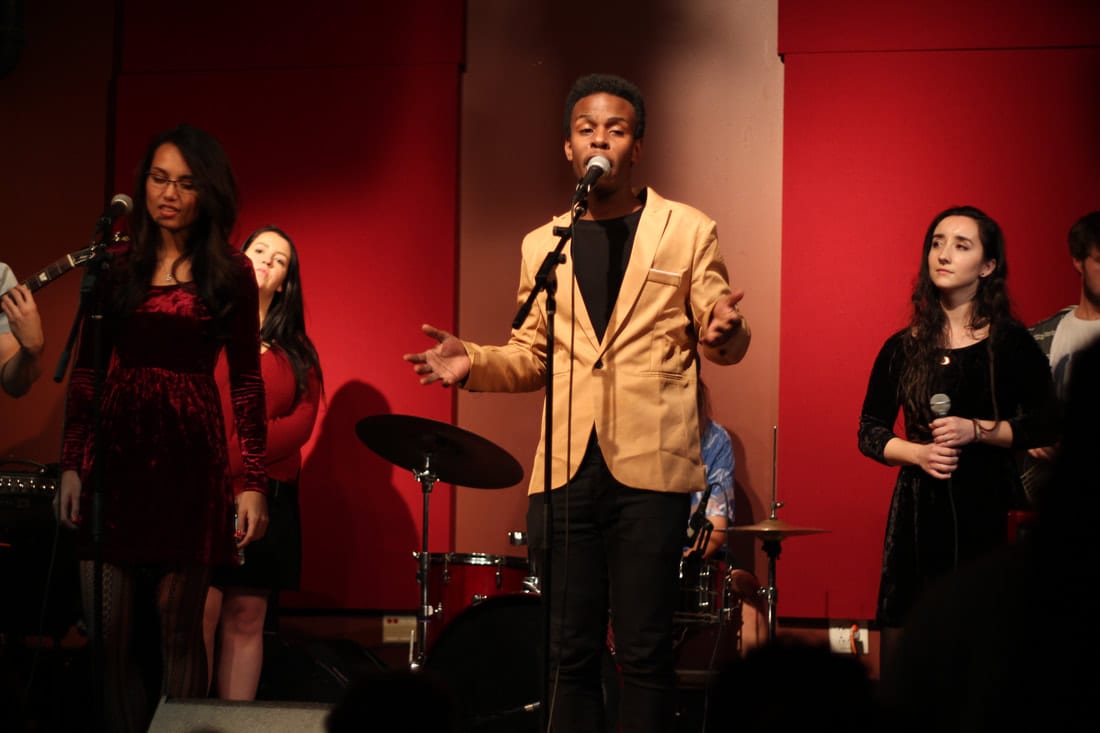 The best job Mark Anthony Manning has ever had is singing on stage in front of a band at local weddings. Submitted photo

ALBANY — The 20-year-old man’s voice soared as he played the piano in a minuscule practice room, eyes shut as he swayed to the music and several veins appeared across his face and neck. The dim lighting and tight space made the experience feel more intimate and hearing his voice echo sonically through the surrounding walls projected the impression of a cathartic release of pent-up energy and passion.

Mark Anthony Manning had invited me to meet him there at the Massry Center for the Arts in the College of Saint Rose in Albany. He is currently a junior student there and studying towards a bachelor’s degree in Music Industry. Performing a few original songs on the black Steinway & Sons piano which he’d penned, he said that he mainly plays pop and R&B music, is a songwriter, and he has two music-related jobs.

First, he has been working as a wedding singer for Silver Arrow Band, a company which performs at festivals, corporate events, private functions, and weddings, since early summer. In Manning’s case specifically, he travels with them across the state to perform a collection of requested songs for people’s weddings. Silver Arrow Band has won numerous accolades, including WeddingWire Couples’ Choice Awards every year since 2016.

“It’s by far the best job I’ve ever had. There’s just so many musicians and you just get offered gigs. I’ve never been to a wedding with like the same exact band, it always like switches out because it’s a company,” Manning said.

According to him, he usually gets paid at least $500 or $600 per wedding, although it depends on what musical instruments and how many fellow Silver Arrow Band members are brought for the wedding performance. “It helps me pay the bills and I like getting to travel with them,” he said.

His second stint is being the frontman and lead singer of his own live student band, called Mark Manning and the Sexy Bitches.

His fellow bandmates are Joseph Taurone on the drums; Gabriel Klinger-Horn playing the guitar; Sam Walczyk on the bass; Dan Carr who is in charge of synth, auxiliary percussion, and can substitute for drums guitar and bass; and finally, Kyle Robinson and Amy Branham who both serve vocals and play the piano too. All are St. Rose students, whom Manning met when he was still a sophomore, and they collectively rehearse together every Monday night.

Manning first met Klinger-Horn during a college party early last fall where after some small talk, Manning expressed his desire to start a band. He was surprised when Klinger-Horn revealed he plays the guitar and knows of two peers, Taurone and Walczyk, who play the drums and bass. Over time, the remaining members joined but ironically, the band did not have an official name yet.

It was not until the day of their very first performance together, which occurred at the Rice House — a venue that showcases local collegiate and young adult music talents — in Albany back in October 2017. He noted that that was the night the band made a name for itself in the Saint Rose community and the overall local music scene.

“That day, I was like, ‘I don’t even know what to call us, guys.’ But there was this other band called Hasty Page and one of its members, Josh Morris [who serves vocals and plays the drums] said ‘Mark Manning and the Sexy Bitches’ as a joke,” he admitted. “I then slipped and said it accidentally onstage. But the performance was so much fun and looking back now, we weren’t really friends back then and we’ve since improved so much. It was the first night we really clicked and bonded. The name just stuck since then.”

In fact, he recalled that eventually, people from Silver Arrow Band once saw him perform with his own band, and they asked him if he was interested in working for them too as a wedding singer.

Having started to write songs upon entering college, Manning said “right now, all our songs are about relationships, unreciprocated love and how they don’t work out.”

“I have not one happy song,” he joked.

Regarding his songwriting process, it “usually starts with me getting my feelings hurt in some shape or form, and I’ll come to practice and I tend to have the chords first, before getting the melody and tempo. I mean, every song is different though. Some songs, the melody will come to me first in my head before I work on it with the piano.”

Originally from Long Island, he identifies himself as “maybe a baritone but I’m definitely not a tenor. But I wouldn’t just say I’m a bass either.” Among his sources of inspiration are Beyonce, John Legend, Daniel Caesar and Kirk Franklin. He personally enjoys gospel, jazz and soul music.

“My three siblings, cousins and I were all like a gospel and sang a lot of gospel, and it was cute that we were all family and being in church,” he recalled his childhood days. “We were called like The Manning 6, but eventually, they all grew out of music and I just didn’t.”

After Manning began trying to take piano lessons in second grade, then fourth grade, and again in tenth grade, it was not until attending St. Rose where he had to take four semesters of piano to genuinely improve his piano proficiency.

He was also highly active in musical theater growing up, particularly when he attended Patchogue-Medford High School in Suffolk County, Long Island.

In terms of high school musicals, he played Gary Coleman in “Avenue Q,” Mr. Black in “Wild Party,” The Wiz in “The Wiz: The Super Soul Musical” and Donkey in “Shrek the Musical.” In college, his credits include playing Seaweed J. Stubbs in “Hairspray” and Mitch Mahoney in “The 25th Annual Putnam County Spelling Bee.”

“It just feels like this was something I was born to do, I don’t want to do anything else,” he concluded. He hopes to eventually move to California sometime after graduation to grow as an artist. He even wants to become head of A&R — standing for artists and repertoire, they choose certain artists to get signed and develop their brand — of a music label someday.

“In California, there’s so many record labels and young people out there chasing their dreams,” he said. “I just feel like the resources are more open there. If you want to be noticed by someone important, that’s the place to go. But I really believe in myself and have so much faith. You have to, no one else is going to if you don’t.”

For now, Manning maintains a website at iammarkmanning.weebly.com and has an upcoming extended play coming out in either October or November.