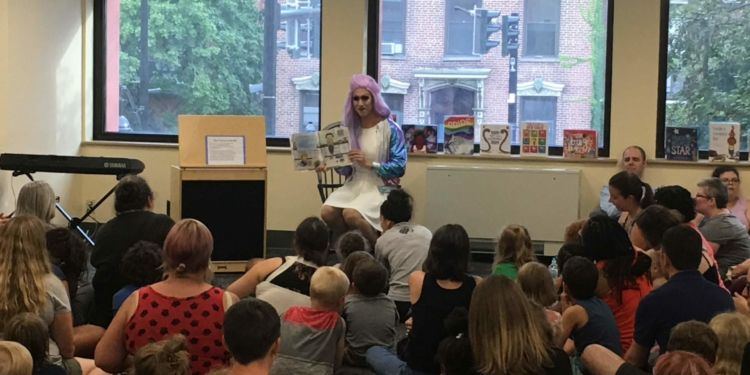 ALBANY — When drag queen Noelle Diamond read about unicorns, narwhals and rainbows to young intrigued children and their parents at the Albany Public Library’s Washington Avenue branch on Tuesday evening, Aug. 7, she did not have to outright speak certain words into existence to get her point across.

Those words were tolerance, acceptance and inclusivity, topics that may be too advanced for such children’s minds for now. But judging from the surprisingly sheer number of visitors and families who came to listen to Noelle Diamond’s storytelling, it seemed evident that local families are encouraging their children to learn about them and be open-minded, which is key in their cognitive and emotional development.

By its definition, a drag queen is a man who dresses up in feminine clothes, typically for entertainment. A drag queen may wear exaggerated costumes and makeup, too.

Beginning at 6 p.m., the free hour-long event saw Noelle Diamond reading aloud from children’s storybooks, having engaging activities like singing songs, and quite literally, having a dance party with everyone in the room.

Over 200 people attended it, mostly comprising of families with children while the rest were supportive members of the LGBTQ+ community, as well as allies. The audience was also notably made up of people of multiple skin colors and ages, surely making it a diverse destination. Meanwhile, many children were dressed colorfully, with themes of rainbows and unicorns, and one notable girl was wearing a Wonder Woman-themed headband.

Sporting white and purple hair, Diamond was towering with her mermaid-esque jacket (a glittery blend of purple, blue and green) with a bold purple lighting bolt on its back, a sleek white dress, similarly-themed makeup, and black bootie heels.

Prior to the event, visitors would enter into the aptly-named Community Room and each receive a rainbow flag-themed pin. As the crowd gathered, Diamond began reading from a storybook titled “Jacob’s New Dress,” written by Sarah and Ian Hoffman, and illustrated by Chris Case. It chronicled a young boy’s love for playing dress-up, while facing backlash from classmates who say he should not “wear girl clothes” and possibly disapproval from his parents.

She then read a narwhal-themed storybook and beckoned everyone to stand up to dance along with her to Justin Timberlake’s 2016 tune, “Can’t Stop the Feeling!” Afterwards, she had a brief photo-taking sessions with families while children were relegated to crafts activities.

“The Albany Library actually contacted me and I do have a friend who works at the library, and they wanted to do a Drag Queen Story Hour, so I had to say yes!” Noelle Diamond said, explaining how she was able to help organize the event.

Drag Queen Story Hour (DQSH) is an organization with chapters across many cities in the United States, like Chicago, Illinois, Houston, Texas, and San Francisco, California. It aims to hold drag queen-themed events “all over the world at libraries, schools bookstores, museums, summer camps, afterschool programs, and other community spaces.” It’s also made headlines on publications like The Guardian, The New York Times and the New Yorker.

Created by author Michelle Tea and RADAR Productions in San Francisco in December 2015, DQSH aims to teach children and families the importance of self-expression and self-love, without having to literally say those words. It grew popular nationwide since then, thanks to social media.

Diamond believed that events like her family-friendly storytelling “show young children who express themselves differently that they’re not alone. I think it’s awesome to tell children, who may get bullied or teased for simply being who they are, that it’s okay to be yourself and not to give in to their negativity.”

While she has received backlash for being a drag queen in the past, she conversely said that “the support I’ve received far outweighs the negative. I want to focus more on the positive.”

“Please schedule a follow up event on child abuse or pedophilia … You force little kids to participate and understand something way beyond their years? Pretend it’s a clown show? Some practices should not be accepted and tolerated. This is one.”

The library kindly responded with a list of hotlines for abuse assistance and health care services. The exchange was met with supportive commentators who both sided with the library and further expressed excitement for the event.