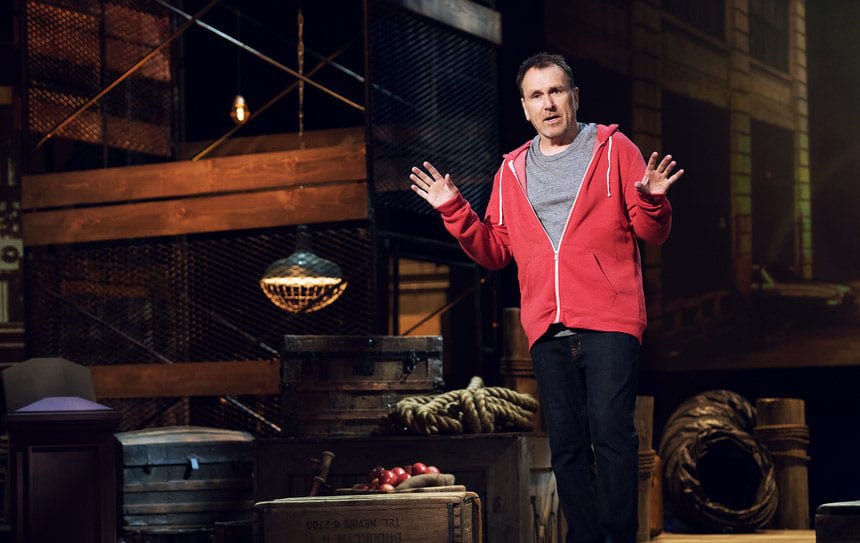 ALBANY — For anyone familiar with Colin Quinn and his New York-style comedy, his performance at The Egg on Friday, March 23 did not disappoint.

Quinn jumped between large societal issues, and the self-involved people you meet on a daily basis. He, himself, spent part of his hour long set trying new material, namely trying to solve the cultural and political divide in America. While the ideas he had have comedic potential, like dividing different social and political groups into various states, with fitness freaks, for instance, living a territory surrounded by mirrors with strict rules on the percent body fat of citizens.

While amusing, these societal diagnoses and solutions came across as material that was still in progress. It was in the same vein as his 2013 special,“Unconstitutional,” that poignantly teased and dissected American society.

When a heckler from the back of the audience tries to derail his performance, Quinn reminds him of just how long he’s been in the business with a well-oiled “Shut up, sir!” This launched him to the best parts of his on personal interactions, with the self-described comedian from work that tries to startle you when you’re holding a hot lidless coffee, to the power tripping friends that play “pranks” on you like sneaking up on you on a deserted street.

The first two openers, Kristen Buckles and Lacey Jeka, performed as a duo, taking shots at each other under the guise of safe space-lingo as they vied for control of the stage. Exchanging biting doublespeak, while encouraging each other to feel empowered, they played perfectly as two narcissistic millennials. Bantering back and forth they didn’t show their opinion on the new age of empowerment until the end; “Listen, ‘believe all women’ is an insane statement, and bull**** is genderless.”

The third opener of the night, Tim Gage, brought out the first hard laughs from the sold-out show. Drawing from his own experience as a blue collar worker in Long Island, his imitation of a jonesing lotto-player rocking back and forth at a 7-11 was spot on. He wondered aloud why he would have to be there so early in the morning to play their numbers, “It used to be the mafia would come to your house. Who stopped that, Cuomo?”

Over the hour and 45-minute show Quinn and his openers brought their “A” game to The Egg. While his cultural jokes came across a little thin, Quinn’s acute jokes on social situations were great, and after some more shows his new material would be great to see when he returns to the Capital City.

Let’s hear it for the girls