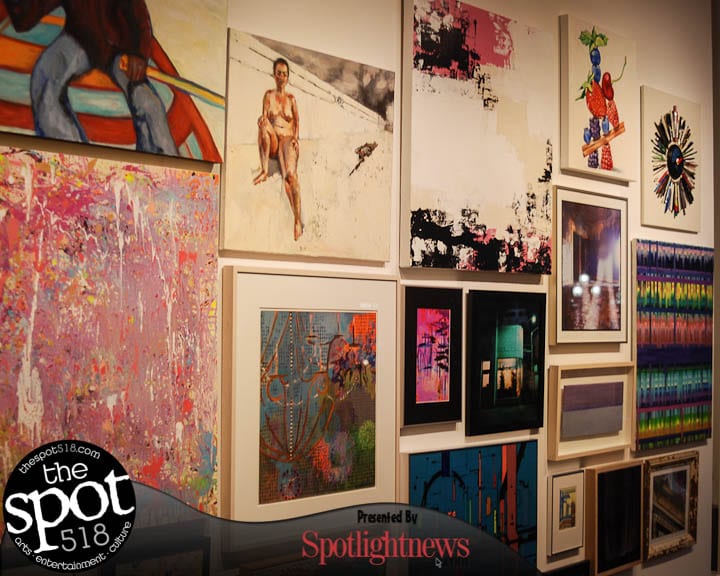 ALBANY — Albany Center Gallery opened its new location in the Arcade Building at 488 Broadway in Albany on Wednesday, Jan. 18. After 40 years of showcasing local and regional visual artists in various repurposed locations around the city, the new gallery space is ACG’s first home that has been designed specifically for showing art.

In spite of the cold January rain, more than 500 people showed up to view the Member’s Show exhibit, showcasing more than 175 regional artists, and to enjoy locally crafted beverages, food and music by DJ Trumastr. The approximately 2,050 sq. ft. of space on the ground floor of the building was packed wall-to-wall and overflowed into the hallway of the Arcade Building, where refreshments were served.

“The Arcade, across from Jim Dinapoli Park, symbolizes a new era in Downtown where traditional buildings can be put to new contemporary and modern uses,” said Tony Iadicicco, executive director of Albany Center Gallery. “This is now a home in which artists will be proud to showcase their art, while bringing a new energy to an underutilized landmark.”

“We are proud to welcome Albany Center Gallery as an anchor destination to the building and the emerging Maiden Lane corridor. There should be more collaboration to draw residents and businesses back to downtown,” said David Sarraf, manager of Fairbank Properties.

ACG announced the move to the Arcade Building last October, capping a two-year long process to find a new permanent home. Employees and board members were visibly relieved and excited to be securely in their new home and to have art hanging on the freshly painted walls. Donations of money, resources and time helped in getting the space ready for its first show in the new gallery, according to board member Stephanie Proctor. “I was amazed at how generous people were,” she said. “It seemed like everyone wanted to help somehow.”

“The arts revitalize neighborhoods and promote economic prosperity.  As we experience the growth of Albany’s newest neighborhood, we are thrilled that Albany Center Gallery has recommitted to Downtown. Drawing in over 25,000 visitors each year, the gallery highlights the wealth of talent here in our region and, in doing so, continues to transform how people engage with Downtown,” said Georgette Steffens, executive director of the Downtown Albany Business Improvement District.

The Arcade Building, which totals 75,000 sq. ft. and is owned by Fairbank Properties, recently completed a $10 million renovation that includes 60 new apartments. In addition to ACG, the Arcade is also home to the second location for Stacks Espresso Bar. ACG, founded by Les Urbach in 1977, was first housed in the Capital District Psychiatric Center — hence the gallery’s name.

For more information about making a donation to the gallery or becoming a member, contact Tony Iadicicco at (518) 462-4775 or by visiting albanycentergallery.org.