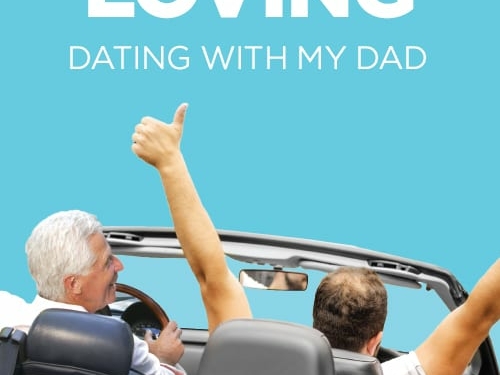 ALBANY — Dating is hard enough on its own, much less when you have to screen your father’s options, too. Bob Morris’ hilarious, poignant new play Assisted Loving: Dating with My Dad posits a brave new world that tangles filial piety, romance and the internet in bright, unexpected ways.

Morris, a popular New York Times writer, based the play on his comic memoir, Assisted Loving. It marks his dramatic debut, and the piece has been carefully guided on its path, from its earliest stages, by Greenberg.

“Bob’s story echoes his own,” Greenberg says. “It’s about what happens when a single 40-year-old style writer for the New York Times is offended by his recently-widowed 80-year-old father’s decision to start dating soon after his wife’s passing.”

“The son—David—insists on vetting Sol’s online dating service picks, and in the process the two learn about each other and themselves. Most of all, it’s about the fact that falling in love is a choice.”

Greenberg has worked closely with Capital Repertory Theatre Producing artistic director Maggie Mancinelli-Cahill on the development of Assisted Loving. Greenberg, who is coming directly off huge successes with Holiday Inn: The New Irving Berlin Musical (which he co-wrote and directed and is currently running through Jan. 15 on Broadway at Studio 54) and a record-breaking smash-hit West End revival of Guys and Dolls, has deep ties with CapRep, including directorial duties for Edges: The Musical, Song of Singapore, The Blue-Sky Boys and a stunning 2010 production of Moisés Kaufman’s 33 Variations.

Additionally, Greenberg has used CapRep as a launching pad for a new conception of Jacques Brel is Alive and Well and Living in Paris, which went directly to New York; Breaking Up Is Hard To Do, which found strong life in regional theatres; and Single Girl’s Guide, a musical reimagining of Jane Austen’s Emma in the swinging 1960s.

“Creating new work at theREP is what keeps us strong,” says Mancinelli-Cahill. “We are committed to bringing new voices and new ideas to the greater theatre world, and Gordon is, without doubt, one of our primary partners in reaching that goal. It is always an honor and a thrill to have him with us at theREP.”

Greenberg was drawn to Morris’ book, which began its stage life as a one-man show, not just because the author “had a great story to tell,” but because he also has “a unique sense of humor and sensibility. We just couldn’t wait to unpack Bob’s true tale in a theatrical way that would highlight the comedy, the craft and the humanity.”

“Bob,” Greenberg says, “is one of the funniest, most quintessentially New York people I know. His voice captures a smart, stylish and sophisticated point of view, while at the same time being full of heart and warmth.”

For the world premiere of Assisted Loving: Dating with My Dad, Greenberg and longtime Capital Repertory Theatre Casting Director Stephanie Klapper, have assembled an impressive quartet.

And the comic foils of Cheryl Stern and Max Wolkowitz play a wild panorama of potential dates, from aging hoofers and “a Jewish Dolly Parton” to vegans and dog-loving downtown men.

Pearl, best remembered for his role as Doody in the film version of Grease, made his Broadway debut as Randolph MacAfee in the original 1961 staging of Bye Bye Birdie, and followed in the national touring and Las Vegas companies of the show. He hasn’t stopped working—as a stage and film actor, director and teacher—since, with other Broadway stints including the original company of Oliver!; a turn as Sonny in the first national tour of Grease (which featured John Travolta as Doody); and on tour and on Broadway with The Producers. Pearl previously worked with Greenberg on Happy Days: A New Musical (which visited Proctors in 2009).

Toronto-born Sills, who participated in initial NEXT ACT! New Play Summit readings of Assisted Loving, is familiar with Capital Repertory Theatre audiences from his riotous turn as Sal in Sherry Kramer’s How Water Behaves, also directed by Greenberg. Soon after moving to New York, Sills joined the first national tour of Disney’s The Lion King. He has appeared in London at the Donmar Warehouse production of The Machine; spent three seasons at the Tony Award®-winning Chicago Shakespeare Theater; and has extensive film and TV credits, including roles in Netflix’s The Unbreakable Kimmy Schmidt and USA Network’sMr. Robot.

Stern—Edie, etc.—is a Broadway veteran (with turns in La Cage Aux Folles, The Women and Laughing Room Only) and a Jonathan Larson Award-winning writer, who recently received critical Off Broadway acclaim for her new solo show, Shoes and Baggage, featuring music by Tom Kochan. Films include Brooklyn Lobster with Jane Curtin and Danny Aiello and This is Where I Leave You starring Jane Fonda, Tina Fey and Jason Bateman.

Brooklyn resident and Bennington College grad Wolkowitz—Max, etc.—is a member of The Actors Center, and also works as an animator, musician and director. He is a recipient of the Wise Foundation’s Emerging Artist of the Year Award and has extensive experience with Trinity Repertory Company, Penguin Rep Theatre and The Secret Theatre.

Discussion nights with the cast of Assisted Loving: Dating with My Dad take place 6:30 p.m. Wednesday, Feb. 8, preceding the performance; and following the show, Wednesday, Feb. 15.

The Sunday, Feb. 19 matinee is preceded by a Behind-the-Scenes event, which features complimentary light breakfast fare for ticketholders, and discussion led by theREP’s Producing Artistic Director Maggie Mancinelli-Cahill. Food service begins at 12:30 p.m., with the presentation following from 1 to 1:30 p.m.

The 2016-2017 Season at Capital Repertory Theatre is sponsored by KeyBank.