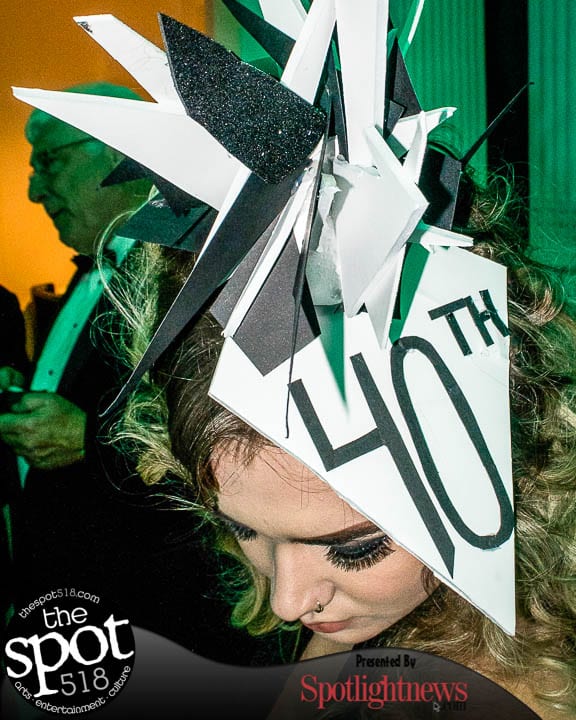 ALBANY — Creatively attired in black and white, local artists and benefactors of the local arts scene celebrated the 40th anniversary of Albany Center Gallery at its annual gala on Saturday, Nov. 19. The black-and-white themed event, held at the Renaissance Hotel in downtown Albany, marked not only a milestone anniversary, but also a transitional time for the gallery as it prepares to move into a brand new space at the recently renovated Arcade Building on Broadway—for the first time in two decades, the gallery will inhabit space that has been specifically designed for showcasing art.

Attended by more than 275 guests, Executive Director Tony Iadiciccio called the 2016 gala “the biggest and most successful fundraiser in the history of ACG.”

Forty years ago, when Les Urbach first opened in the lobby at the Capital District Psychiatric Center on New Scotland (hence the Center in ACG), Iadiciccio said that the region lacked a community arts scene. “Our founder really was a champion for local and regional artists,” he said. “There are some extremely talented artists who live around here and show internationally and teach at a local universities and colleges. I think what he did, in the 70s, was to stake a claim and say that there are really, really talented artists here and just because they’re local doesn’t mean you should  discredit that.”

Today, 40 years later, showcasing local artists remains a driving force behind the gallery. “And we try and provide opportunities for the creative class, whether it’s painting and sculpture or designers, photographers,” said Iadiciccio. “Really, all walks of creativity is what we’re trying to support now.”

After the Psych Center, ACG moved to the ground floor of the building that is now home to 17 Chapel Condominiums, then occupied space in the back of the Washington Avenue branch of the Albany Public Library before eventually moving to their soon-to-be-vacated location on Columbia Street in downtown Albany ten years ago. The new gallery space at 488 Broadway, said Iadiciccio, “is something that will take us into the next ten years.”

“We’re very excited,” Iadiciccio said. “It’s amazing that they’re actually building it out to be a gallery space. All of our previous homes were a hallway, extra space, but never really a gallery. What the Arcade Building is allowing us to do is actually build a gallery with space to fit a vision that we have, which is nice.”

Grant funding from the City of Albany and from the Albany County Visitors Bureau helped ACG to secure the new gallery space, he said, “and we’re actively writing grants for money for the actual fit-out of the space itself.” Donations to the gallery’s ’40 for 40’ fundraiser—in which donations of $40, up to $8,000, will be matched by the gallery’s Board of Directors—are also going to help to pay for interior design.

“They appreciate and value what the arts can do,” Iadiciccio said of local government. “But, for me, working with many artists, it’s about the community valuing it and really supporting it and paying for these types of things to happen. Because artists usually do have a lot of passion but they also need to be able to make a living. It’s really a part of the whole creative economy and the job placement that should be happening in the arts.”

In addition to raising thousands in ’40 for 40’ donations at the gala, there was a silent auction, a live auction and a raffle. Bidders won donated wine collections, artwork, upscale dinners, hotel stays and more. One will be taking 11 friends on a private tour of T.E. Breitenbach’s castle near Altamont, hand-built by the artist, and exclusive viewing of some of his more renowned work.

The annual gala, in addition to being the gallery’s biggest fundraising event every year, also provides a chance for ACG to honor those it feels have been outstanding in their work and in their commitment to advancing local artists here in the Capital District. Each year, the gallery bestows a lifetime achievement award and an artist of the year award.

The Mona Ruth Brickman Memorial Award is given to an artist who has shown their work at the gallery during that year and who has demonstrated skillful, provocative work and taken on a leadership role in the arts. Tara Fraccalosi, is the creator of an ever-expanding photography project called Archive,’tens of thousands of categorized photographs from which she “explores and evolving language of images selected, composed, combined and re-combined in accordance with various rules. The resulting works map the commonalities, disjunctions and arbitrary collisions that form the basis of any language, any thought, any mode of being.” An assistant professor of fine arts at Hudson Valley Community College, Fracalossi is also the founding director of the Teaching Gallery on campus.

The Les Urbach Lifetime Achievement Award, named for the gallery’s founder, is awarded to someone who has proven extraordinary in their support of the gallery, said Iadiciccio, and who has also taken on a strong leadership role within the community. This year, recipient Stuart Horn flew back from his new home in California to accept the honor. An accomplished educator in the Capital District, Horn served eight years on the ACG Board of Directors and as both chairman and president of the nominating committee, helping to choose those who have been honored before him—all of whom he remembered in his acceptance speech. “He’s somebody that really goes above and beyond the gallery,” said Iadiciccio, noting that Horn is also an accomplished local chef.

For those who missed supporting the gallery at the gala this month, there will be another opportunity to do so in style at the eighth annual Albany Chefs’ Food & Wine Festival: Wine & Dine for the Arts on the weekend of Jan. 12. ACG has been named one of five primary level beneficiaries of the fundraiser, along with Albany Barn, Capital Repertory Theatre, Palace Theater and the Washington Park Playhouse. Eight second tier beneficiaries include the Albany Institute of History and Art, the Albany Symphony, and Upstate Artists Guild.

The three-day event will feature a series of food and drink competitions, tastings and educational opportunities showcasing 70 local chefs and their restaurants and 250 wines, spirits and craft beers, culminating in a gala reception and six-course dinner prepared by the festival’s Signature Chefs. Tickets are available for the entire weekend or for specific events, such as the Slider Slam competition or the Grand Tasting. More information can be found at www.albanywinefest.com/.

“It is a celebration for the arts and the community,” said Iadiciccio. “And it helps us to be able to continue to do what we do.”

Photos below by Jim Gilbert, of NYSmusic.com. Click on a photo to view the rest of the gallery in full size.

Albany County Dems are looking for an elections commissioner, again

PICK OF THE WEEK: A ‘curious incident’