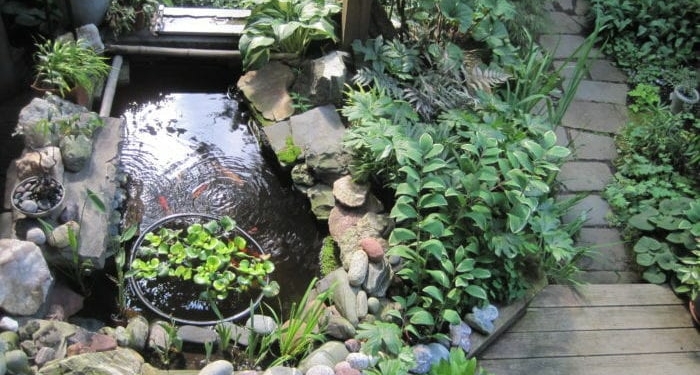 The gardens are small and may include stairs and unpaved or cobblestone paths. Dogs are welcome in Troy’s neighborhoods, but not directly in the gardens. Submitted photo

“Most people only ever see the facades of our brownstones from the streets,” said Peter Grimm, president of the Friends of Prospect Park. “This is a special kind of event that invites visitors into the hidden, green spaces of our city. It really showcases the humanity and livability of Troy.”

Now in its 17th year, the Hidden Garden Tour is a fundraiser to benefit Troy’s Prospect Park held rain or shine on Thursday, May 26 from 4 to 7:30 p.m.
Last year, the event attracted more than 500 tourgoers — its highest attendance ever, which organizers attribute to the growing excitement and interest in Troy.

While most of the gardens are approximately the same size, about 20 feet by 30 feet, they vary greatly in style. Some of the gardens feature charming pathways, fountains and fish pools. Some are filled with flowers, while others have more plants and vegetables — all lovingly tended by gardeners of all skill levels.

“I think the garden is the mirror of the personality,” said Grimm, whose garden of lush green plantings make use of the shade. “Every single garden is unique and gives you a glimpse of what that person is all about.”

Nina Pattison’s garden is the first stop on the tour and thrives in sunny conditions.

“I have what people refer to as an English Cottage Garden, which means it’s ‘designed’ according to my personal tastes,” Pattison said. “If I like it, I grow it. And if it doesn’t like me, we part company.”

Now an octogenarian, Pattison had been living in Boston when, in 1987, she decided to return to Troy, the city of her youth, and purchase her house on Second Street. “You could not find a piece of property like this in Boston even if you could afford it!” she said. Pattison and her neighbors had been showing off their gardens for a few years before they decided to formally organize the Hidden Gardens event for the public.

“Two people actually bought houses in downtown Troy as a result of this event, because they could see what was possible,” Pattison said. “Until they saw the gardens, they didn’t know you get more than a pile of bricks for a backyard.”

Grimm said the Hidden Garden Tour has evolved into a “Troy Livability Campaign.” He believes it has the potential to become the summer equivalent of Troy’s Victorian Stroll, an annual winter event that draws more than 20,000 visitors to explore and enjoy the businesses and historic buildings of downtown Troy.

The Hidden Garden Tour map is also a ticket for free light refreshments, from 4 p.m. to 6 p.m., at Carmen’s Cafe, located at 198 First Street.

Admission to the Hidden Garden Tour is $10. Tickets are available in advance online at troygarden.brownpapertickets.com or on the day of at the check-in-table at the Russell Sage College Parking lot.

Editorial: What makes you happy?