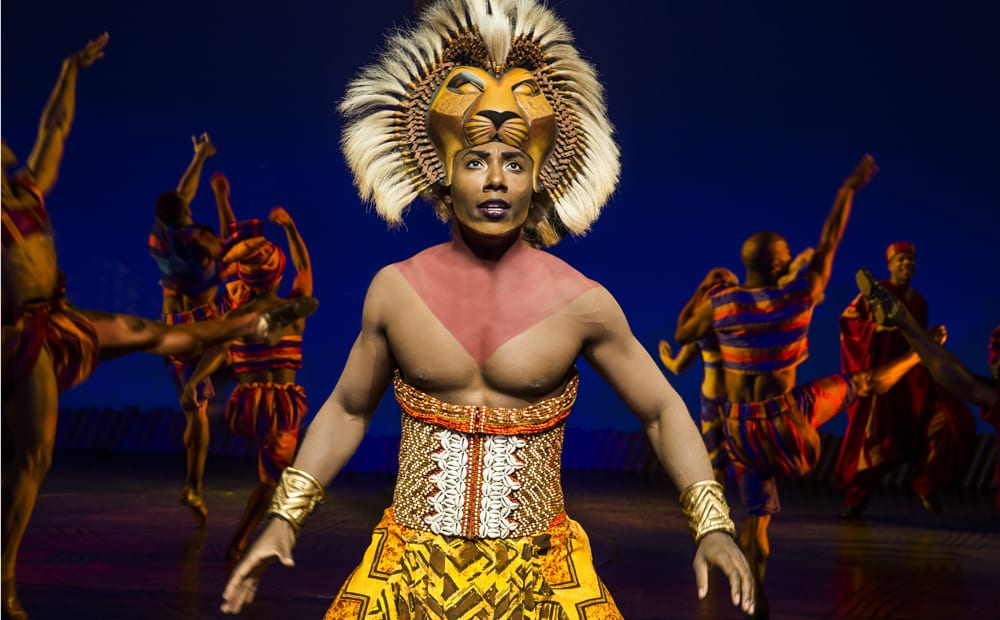 Simba, here played by Aaron Nelson, plays the cub who will be King of the pride — so long as he can battle through his fears. Photo by Matthew Murphy

SCHENECTADY — As elaborate and awe-inspiring the costumes and scenery of The Lion King can be on stage, it’s the operations behind the scenes that is more impressive.

Mind you, when Pride Rock, the Elephant Graveyard, or even the giraffe costumes themselves are not on stage, they all fit some place backstage. And, while the show is going on, that backstage is as hectic as the flight deck of a naval aircraft carrier, said Production Stage Manager Matthew Shiner.

“It’s a very big show. It’s a grand spectacle,” said Shiner, who has logged more than 25 years into a stage managing career with a list of shows that runs five pages deep on his resume. The production veteran has been at the helm with The Lion King for eight months, as it tours the nation. It makes a stop at Proctors for a near one-month run that starts Tuesday, March 22 and closes Sunday, April 17.

“Given the size and scope of the visual spectacle, the puppets and the costumes, the size of the cast, and the size of the support crew that goes along with it, [The Lion King] presents a wholly unique challenge,” said Shiner. As production stage manager, he supervises a staff that outnumbers the performers. The stage managing staff helps him with the “moment-to-moment” nuances of the musical. Something he describes as a “well-oiled machine.”

“It pulls out all these different theatrical traditions,” he said. “At the same time I do have a fantastic stage managing staff that helps me, day-to-day, moment-to-moment. We are a very large, well-oiled machine. We have more people off-stage than we have on-stage to help support and get it out each day. Facilitating all those people is a challenge. The biggest part, as you grow into this role and you get comfortable in keeping all those balls in the air, is to make sure everyone has what they need to succeed everyday on stage.”

Of course, The Lion King: The Musical is based upon the hit 1994 film that shared the story of Simba, the lion cub who would be king of his pride. The story, however, takes audiences through the trials and tribulations adolescence and ultimately facing up to the responsibilities of adulthood. Its cinematic success helped usher in the return of Disney Films as a viable franchise again, after several years of subpar earnings.

The musical rendition debuted on Broadway at the New Amsterdam Theater in 1997. It continues on to this day, making it Broadway’s third longest-running show in history. Having grossed more than $1 billion during that time, it is also the highest grossing Broadway production, ever.

The stage production takes on a surreal atmosphere, with actors portraying animals by means of headdresses and other tools. In the case of the aforementioned giraffes, actors take to the stage on stilts to replicate the animals natural height. Principal actors adorn special head pieces that help mimic the wild movements of lions. The imaginative approach, while maintaining the visual African setting of the story, immediately captured audiences. Just how many moving parts there are, both on stage and off, no one knows.

“I’ve never actually ever counted,” said Shiner. “I never thought to count…. Probably because I can’t count that high!”

Those familiar with the movie, but not yet the musical, will witness several additions and tweaks to the storyline. Rafiki, originally played by Robert Guillaume in the film, is now played by a woman in the musical adaptation. The musical also includes additional songs, and scenes not present in the film.

Shiner shared that one difference between the touring act, and the one that plays on Broadway, involves Pride Rock.

“On Broadway, Pride Rock comes up out of the floor from the deck,” said Shiner. “And, we found that many theaters across the country won’t allow us to dig a huge hole in their stage.”

Pride Rock, the symbolic home of King Mufasa and Queen Sarabi, snakes across the deck — both for the practical means of setting and storage, and as an artistic approach.

“The creative team, when they put this tour together 14 years ago came up with a truly artistic and creative way for the Rock to enter,” said Shiner. “The Rock moves around quite a bit more, and it actually becomes another character in the show. … It’s a very interesting and creative solution to the technical problem. And, I could show a little bit of favoritism, but I really like how our Pride Rock snakes around the deck.”

Shiner describes his role with Disney’s The Lion King as “never boring” and “constantly exciting.” It’s a job that also demands persevering the headaches of travel. Understandably, he has relatively more to travel with than your suitcase. He shares how, prior to this phone interview from Durham, N.C., the cast had to duck tornado warnings during its rehearsal. Long days such as that, he said it helps to, “just be able to laugh it off and move on, not take it too seriously.

No matter how rough it is, when I’m in front of the house and watch ‘Circle of Life’, the opening number, I go, ‘You know. It’s all worth it.’ When I see the expressions on the audience faces. Yeah, it was sorta worth the 12-hour day to make it all happen.”

Editor’s Note: In the original online posting of this article, and in the print version, Matthew Shiner’s name was misspelled.

Bethlehem Police, EMS and fire departments honor their own