by Michael Hallisey
in The Spot
Reading Time: 4 mins read 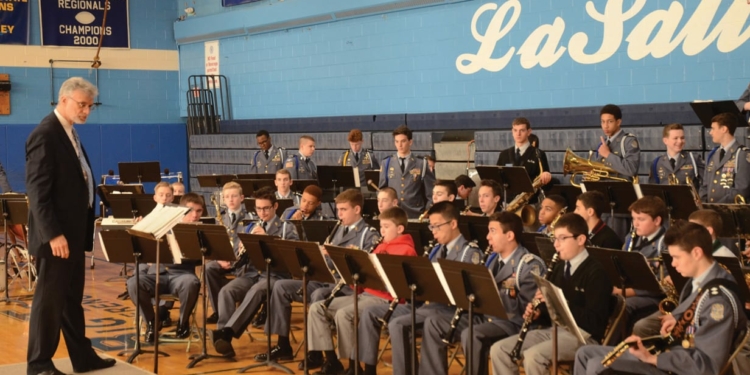 For nearly a quarter century, LaSalle Institute has outfitted itself as one of the premier music programs on the primary school level here in the Capital District.

The all-boys academy took top honors in both the Fonda and New Hartford jazz festivals in February. It’s a habit the school’s dean of academics takes pride in, but the accolades achieved in competition is not the focus of the story.

This time of year, as public schools formulate budgets for the next academic year, extra-curricular programs are often in discussion. Search the subject on your web browser and you will find several regions across the nation still grappling with plans to cut music and art from their curriculum. It’s a thought that does not sit well with Kevin Calacone, Dean of Academics for LaSalle.

“It would be devastating, I can imagine that,” said Calacone. “I’ve never been in that kind of a situation.”

Calacone was a student in the late nineties when LaSalle’s music program started stretching its legs under the tutelage of director John Russell. From the start, Calacone said Russell has not turned a student down who has expressed interest in picking up an instrument. What happens next, however, is up to the would-be musician.

Discipline is far from scarce in this school of more than 400 students, ranging from 6th to 12th grade. Students are immersed in a faith-based environment in accordance to the Brothers of the Christian Schools. Once students reach high school age, they are also enrolled in the Army Junior Reserve Officers’ Training Corps. As one walks down the halls of the academy in South Troy, a throng of young men in military style uniforms surrounds you.

Self-discipline is expected to be the norm, instead of the exception.

“We’ve always had a strong sense of discipline here,” said Calacone. The dean attributes the Christian Brothers and Army as influences to the school’s culture; however, he recognizes Russell’s contribution as well. Each morning, jazz practice starts at 7:05 a.m. – a full hour before school starts. “He’s able to instill that discipline into the boys, that if this is something you are serious about, you need to prove your commitment; not only to yourself, but to your bandmates and to him, to get in here before the sun rises.”

LaSalle has three bands within the music program. There is the Middle School Band to help develop interest among students in the first few years at the school, from 6th to 8th grade. The Symphonic Band comprises of older students, with a few exceptions from the younger grades.

The Cadet Blues Jazz Ensemble is the varsity team. It consists of the schools finest musicians, and requires an entry audition before one can sit in with the group. “Everywhere they go, they bring back gold,” said Calacone. “It’s almost become an expectation.”

The program started to receive recognition in 2003, after placing second at the prestigious Berklee College of Music High School Jazz Festival in Boston. They’d placed fifth in the same arena just last year. They reignited the school’s winning tradition last year, taking gold at Oneida and Fonda, repeating an accomplishment done only once, just six years before.

“It was a great reward,” said percussionist Benjamin Grant. “It was cool getting it two years in a row (2014 and 2015) for LaSalle.” Grant took home best individual performer at the most recent festival. The LaSalle senior, who is looking at attending either Ithaca College or Boston University, sees a correlation between his musical accolades and his success in the classroom. “[I] recognize the importance of music education in high school, and how it can motivate kids and build confidence to succeed in other academic endeavors.”

Numerous studies of late have tied musical training with good grades. Yale School of Medicine concluded that music strengthens language development, precipitating into heightened social abilities. In 2004, a University of Toronto study matched six-year-olds, pairing one group with music lessons and the other without. The children with music lessons saw a modest increase in IQ over those without music. A few years later, the University of Kansas went as far to state elementary students enrolled in superior music programs were apt to score 20 percent higher in math and English, versus those with subpar programs.

“I’ve noticed that a lot with the kids in the jazz band now,” said Calacone. “I think [music is] beneficial. I know there’s been a lot of studies out there – Boston College and the University of Kansas – linking the connection between music and academic achievement in other areas. Besides the social aspect and the confidence and to see kids more socially interactive, we do tend to find that the students in the band tend to perform really well in the classroom as well.”

For another LaSalle senior, each study just confirms the adage behind good ol’ hard work.

“I think music in general teaches you hard work and discipline that you can take and translate into your other classes,” said Cameron Bartow, a tenor saxophone player. “It’s almost humbling in a sense. You really need to work harder at things in order to get to the point of greatness.”

Grant and Bartow both take college level courses next door at Hudson Valley Community College. The two schools maintain a relationship, with the college offering college entry courses to the academy.

Grant sees the lines between math and music blur as he plays. “When I’m playing I’m using math while I’m subdividing rhythms and looking at phrases, and how I’ll put those together in my head,” he said. As they each perform well in the college setting, they set their sights on what they hope to accomplish when they go to tackle the real world. Grant plans on earning a seat at a large symphonic orchestra. Bartow, who shares the saxophone in common with former US President Bill Clinton, seeks the global theatre for his future.

“I really want to take the critical thinking side of different business problems and take it to the world stage,” said Bartow, who plans to study at either Cornell or Northeastern next year. “Resolving issues. I think that would be a great career path. Resolving conflict.”