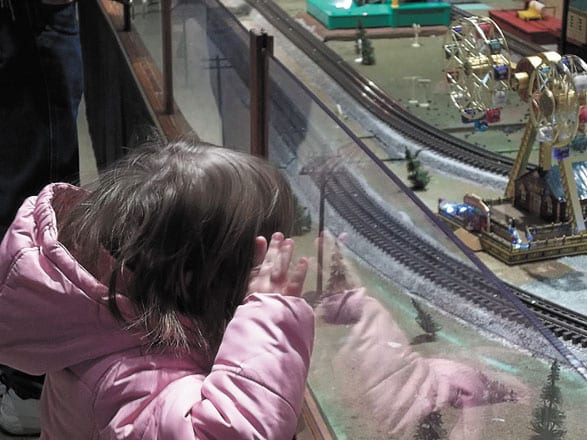 In a world where 8-year-olds beg for the latest cellphone, the sight of a toy train set still holds a special kind of magic this time of year – especially in Schenectady.

“If you were to list the Top 20 toys in history, trains would certainly be one of them,” said miSci Executive Director Mac Sudduth.

And on Nov. 28, miSci opens the doors to its annual Trains and Toys Holiday Show.

“It’s a family favorite that’s been happening for several years,” said Sudduth. “We’ve been doing it for quite a few years. People love it and always ask when it’s coming back.”

This year’s exhibit features running model trains and science toys most people don’t have at home. With the show opening just after Thanksgiving, Sudduth said he hopes it gives families the opportunity to take advantage of the traditional day off from school and work to share the exhibit with friends and family visiting from out of town.

An elaborate 19-by-27-foot train set diorama, constructed by the Upstate Train Associates, will display functioning O-Gauge model trains in front of the main entrance to the Suits-Bueche Planetarium. Toy train enthusiasts will identify these as Lionel model trains.

In addition to several model trains that will run continuously, visitors are promised scenes of an amusement park (complete with Santa riding a roller coaster), a pair of children ice-skating on a pond, a farm with horses and cows, and more. The trains that load and unload their cargo of barrels, lumber and other objects are always a hit with visitors.

There will be a working “Thomas the Train” display for children who know and love the iconic animated character.

The museum’s Play Space also promises to provide science toys and other activities to entertain the young and young-at-heart. The popular water table has been moved inside for the winter, allowing kids to explore how moving gates from one position to another affects the flow of a waterway.

The museum is featuring a new Kids’ Supermarket, opening just in time for the holiday season. The supermarket helps teach weight, measurement and sorting in a kid-sized market.

There is also the opportunity to explore engineering as children can design and construct their own playhouse.

A place in history

For the first half of the 20th century, trains were as synonymous with the city of Schenectady as General Electric.

As Thomas Edison developed luxuries such as the incandescent light bulb, refrigerators and phonographs, the American Locomotive Company (ALCO) became a regional manufacturing giant known for its locomotives and automobiles. It provided the engines for the Union Pacific Railroad and answered the country’s call to duty by providing the military with tanks in World War II.

Together, the two companies established Schenectady as a prominent manufacturing center known as “The City that Lights and Hauls the World.”

Sudduth said that history is preserved at the museum’s extensive archives – just another service the museum has provided over the years. The archives at miSci include an extensive GE Photograph collection, with more than 1.6 million prints and negatives; an archival collection with more than 3,500 cubic feet of historic materials; and more than 15,000 objects relating to the history of science and technology. The archives also house an 1878 Edison tinfoil, the second oldest documented Edison tinfoil recording, the oldest playable American voice.

Founded in 1934 as the Schenectady Museum, miSci houses The Suits-Bueche Planetarium with the only GOTO Star Projector in the Northeast and is recognized as an official NASA Space Place.

MiSci is located at 15 Nott Terrace Heights in Schenectady. General admission is $6.50 for children 3-12, $8 for seniors 65 and older; and $9.50 for adults. Admission to Trains & Toys is included in general admission. For more information, call 382-7890 or visit miSci.org.