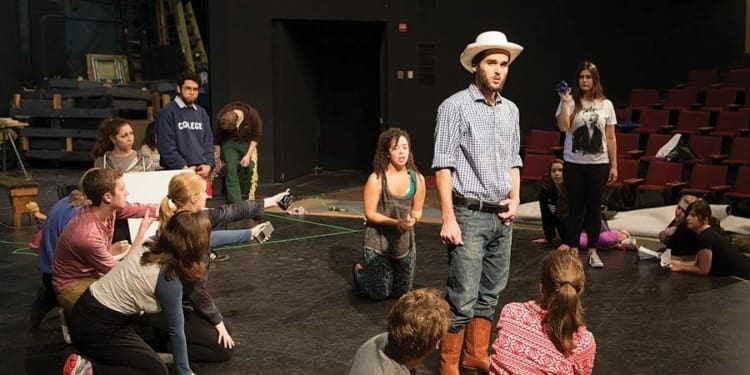 While researching the weighty subject of filicide, the deliberate act of a parent killing their own child, for her play “American Medea,” writer and director Holly Derr found herself talking with anyone who would listen.

“I talked about it a lot,” she said. “I find I get obsessed on a topic that I’m researching.”

She recalls a party in particular when her friends had to stop her.

“Oh, that’s right,” she remembered thinking. “Not everyone wants to talk about this.”

Derr’s latest work is advertised as a “provocative re-imagining” of the Medea myth as originally told by Euripides. “American Medea” takes place in modern-day Corinth, Texas, where a frenzied media reports the facts of a horrific crime, and community members are forced to question their own views on motherhood and gender roles. American Medea is an unflinching collage of story and culture, a new American myth based on our own contemporary Medeas.

Derr said she first put pen to paper in 2001. At the time, she was attending a class on Greek classics at Columbia University, and the catalyst for her play flashed upon hearing the tragic news of Andrea Yates, who killed her own children.

The original “Medea,” written in 431 B.C., focuses on the actions of wife and mother, Medea, as she confronts the betrayal of her husband, Jason. Ultimately, she plots her revenge by involving the murder of their two children.

“I was interested to find more of the similarities than the differences between the original play and the stories I researched,” said Derr.

In 2001, Yates was a 36-year-old mother of five in a home she shared with her husband, Rusty, outside of Houston. In June, news reports circulated the nation after she had systematically drowned her children, aged 7 to 6 months old, in the bathtub. She would later be acquitted of the crime as she was found to be suffering from postpartum psychosis.

Derr’s work remains true to the original play by maintaining the same timeline and the same characters, but Euripides’ words are often presented through news bulletins and police reports, in addition to dialogue.

Show times are scheduled from Nov. 14-16, and Nov. 20-23, at the Janet Kinghorn Bernhard Theater at Skidmore College. All shows start at 8 p.m., except Sunday matinees at 2 p.m. Tickets are on sale for $12 general admission, $8 students and senior citizens. For reservations or information, call the Skidmore Theater Box Office at 580-5439 or email [email protected]

Local group gives back to veterans