Park Playhouse and Palace partner up 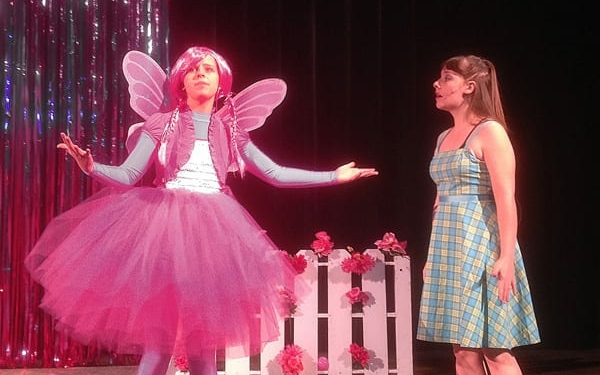 • What: “Pinkalicious: The Musical”

The Palace will host the Park Playhouse’s performance of “Pinkalicious: The Musical” on Sunday, Nov. 16, at 3 p.m. The outing launches a weeklong tour through Capital District schools by Playhouse performers.

“Pinkalicious” is based on the popular book by Victoria Kann and Elizabeth Kann about learning self-control and the importance of moderation. This new musical, to be produced on The Palace stage by Albany’s Park Playhouse, teaches kids the power of nutrition and how leading a healthy life can still be cool.

The musical is presented by Albany’s Park Playhouse, in collaboration with The Palace Performing Arts Center, and will feature a professional cast including alums from the company’s productions of “The Producers,” “Spamalot” and “Hands on a Hardbody.”

Sean Allen, marketing director for The Palace Theatre, said the organizations already had a natural relationship, as individuals often sit on both boards. The Palace Theatre is also the home to the Park Playhouse’s business office.

And, now, the Park Playhouse will work with the Palace Performing Arts Center to administrate and produce the theater’s annual Arts Education Series, featuring free school-time shows and movies for students.

“We recognize the important role that the arts play in a student’s development, especially skills for self-expression,” said Owen Smith, managing director of The Palace and Producing Artistic Director at Park Playhouse. “We applaud the parents and guardians who bring their kids to the theater, and the teachers who make the arts a part of their curriculum.”

The Palace Arts in Education Series will include school-time showings of the following: Park Playhouse’s “Pinkalicious: The Musical” (Nov. 17 at 10 a.m.), The Theatre Institute at Sage’s “Dogs of War” (Feb. 9 at 10 a.m.), the award-winning documentary “Bully” (March 2 at 10 a.m.) and Park Playhouse’s new scholastic production of “Footprints on the Moon” (May 11 at 10 a.m.).

“With these productions, along with our touring shows, we hope to offer easy and affordable options for families and the schools to participate in the arts,” said Smith.

As area schools are forced to slash their arts budgets, the collaborative effort only makes sense, said Allen.

“The Playhouse’s busy season is from spring into summer, and then their down time is when we’re busy,” he said. “This helps both organizations in the long run.”

In December, the Park Playhouse will return to The Palace stage as its students perform in the region’s first live production of “A Charlie Brown Christmas.”

Allen said the same child actors who performed in this summer’s Park Playhouse performance of “Oliver!” will return to play the lovable characters created by the late Charles Shultz.

The talent from this group is, “ridiculously good,” said Allen.

Tickets are available at the Palace Theatre Box Office located at 19 Clinton Ave., Albany. Tickets are also available for purchase via Ticketmaster Charge-by-Phone at (800) 745-3000, all Ticketmaster outlets, local Wal-Mart Ticketmaster Centers or online at ticketmaster.com. More information about school-time shows and touring performances can be found online at www.parkplayhouse.com or at www.palacealbany.com.