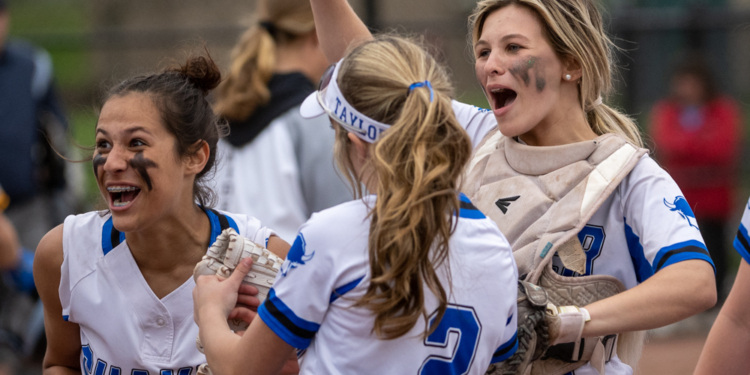 LATHAM — In a game that lived up to the Shaker-Colonie rivalry, the Blue Bison scored two runs in the bottom of the sixth to beat the Garnet Raiders 4-3.

Shaker jumped out to a 1-0 lead in the bottom of the first on a double by Izabelle Ratcliff but Colonie came back by taking advantage of Shaker miscues to score two runs in the top of the fourth.

The lead, though, was short lived and Shaker tied it up in the bottom of the fifth on an RBI single by Alexa Gross.

With the game tied at two in the bottom of the sixth, Ratcliff got her second hit of the day and Tatum Passonno walked. A fly out to right moved Ratcliff to third and the bases were loaded after Elizabeth Martuscello was walked.

Colonie wasn’t done, though, and with two outs in the top of the seventh Taylor Quinn hit a single to right field and scored on a double by Gabrielle Baumann. But the Garnet Raiders could not get any closer.

Baumann went 2 for 3 with an RBI to lead Colonie while Adrianna Laraway and Abigail Hacker each went 2 for 3. Quinn went 1 for 3 and Sophia Currao went 1 for 4.

On the mound, Hipwell gave up three runs on eight hits while striking out three and walking one for Shaker

For Colonie, Adrianna Laraway gave up four runs on six hits while striking out two and walking one.

Colonie will host Averill Park today, Monday May 9, play a non-league game at Queensbury on May 10 and finish out the regular season at Albany on May 11.