MAGEE PARK — As darkness began to envelop Magee Field on Saturday night, Employee Family Protection (7-5) pushed across the winning run in extra innings to move into within a game of second place Russell’s Reds (8-4) with a week left in the regular season. Both teams have secured a spot in the four-team playoffs along with Novus Clothing (9-3) and Proper Engineering (7-5). The last week of regular season baseball will be about seeding and preparing for the playoffs for all four teams.

Jack Cunningham started on the mound for EFP, going one scoreless inning striking out two while walking two. Next up was Bob Frick who lasted 3 2/3 innings giving up one run on three hits and two walks while striking out five. Finishing up was Kieran Barnes, who blew the save, but got the win allowing two funs on two hits, three walks and struck out three.

EFP got things started right away in the bottom of the first with lighting quick leadoff batter Keating Pauze getting things going with a single to right field. After Pauze advanced to third on a passed ball, Barnes drove him in with a line drive single. First baseman Nick Faiola drew a walk and Max Cleary drove Barnes in with a hard ground ball to first to make it 2-0. Devejian avoided further damage with a strikeout and ground out to strand the remaining runners.

After Frick and Devejian dueled for the second and third innings allowing no runs, the Reds began to claw back in the fourth with Devejian helping his own cause with a double leading off the inning. Noah Herne followed with a double of his own, plating Devejian to make the score 2-1. Frick got out of the inning with some fine defensive plays behind him by EFP. 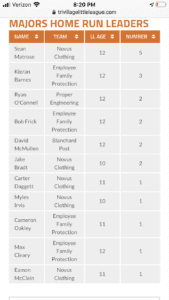 EFP answered in the bottom of the 4th when Barnes leadoff the inning with his third home run of the year, and absolute bomb to centerfield to extend the lead to 3-1. Devejian settled down striking out the next two batters and inducing a ground out to end the inning.

Neither team scored in the fifth and down to their last at-bats, the Reds rallied to tie the game in the top of the sixth. Sparkplug Cam Moon led the inning off with a walk, followed by Jones walking as well. Devejian then tripled to left field scoring Moon, however Jones got thrown out at the plate on a perfectly executed relay throw from Frick and a great tag by Gehrig Monserrat at home to keep EFP up 3-2. Herne then came through in the clutch hitting a sacrifice fly to shallow centerfield scoring Devejian to tie the game at 3. Lucas Bernacki then walked before Barnes ended the inning with a strikeout.

Jones relieved Devejian in the bottom of the sixth and got two quick outs. Pauze then singled, followed by an intentional walk to Barnes to move the winning run to second. The strategy worked out with Jones getting the third out on a strikeout to send the game into extra innings.

With two outs in the top of the seventh inning, leadoff hitter for the Reds Sheamus Healey got on base with a hard-hit ball to left field. Moon then reached after getting hit by a pitch. Barnes however struck out the next batter to move to the bottom of the seventh.

Faiola reached base on a dropped third strike, hustling down to first base as the potential winning run. Cleary, on the next pitch smacked a hard ground ball straight up the middle to centerfield. The ball was misplayed in the outfield and rolled all the way to the wall. Faiola was running hard from first base and sent home. The relay throw was just a bit late and Faiola scored, ending the game with a 4-3 win for EFP.

Sean Matrose of Novus Clothing hit three home runs Friday night including a grand slam and two home runs in the fifth inning, driving in a total of ten runs on the night. Matrose now holds the home run lead with five on the year. Teammate Jake Bradt also homered Friday night, and added his second on Saturday helping Novus take over first place. In Intermediate play, Johnny Lazarek pitched a complete game for Buenau’s Opticians on Saturday in a great game against previously undefeated Blanchard Post. He outdueled the dynamic duo of Jack Driggs and Lucas Aiezza.

Bethlehem Town Board called to special meeting, to adjourn into executive session tomorrow

Bethlehem Town Board called to special meeting, to adjourn into executive session tomorrow