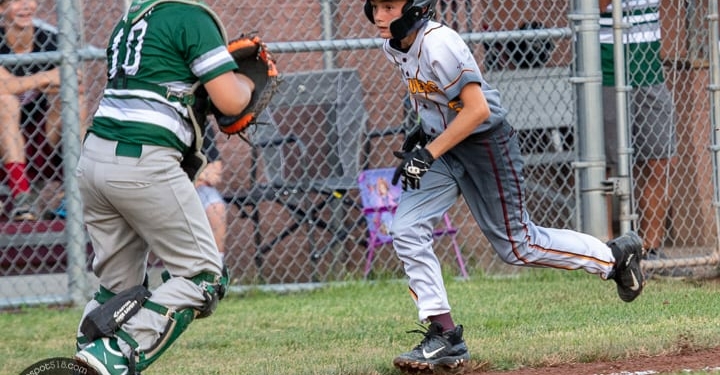 COLONIE — In a glimpse of normalcy, baseball is being played in Cook Park.

The 11U Colonie team scrimmaged the squad from Clifton Park on Wednesday, July 8 in preparation for Opening Day on Saturday.

The Raiders had a tough outing and lost 12-4, but everyone was just happy to be playing baseball. Late last month, as the eight-county Capital District was set to enter Phase IV of the reopening plan, the state said “low risk” youth sports could play like baseball and softball.

The league is requiring everyone maintain six feet of social distance, is limiting the number of players in the dugouts and spectators in the stands. There are no high fives allowed and sharing of equipment is prohibited. Hand sanitization stations and reminder signs are scattered throughout the park. The concession stand is closed, which is a loss of revenue for the league and an inconvenience for the fans, but it is one less thing to worry about, Frey said.

The league has more than 300 kids signed up in five different divisions, T-ball through 12 year olds, which is comparable to last year’s pre-pandemic numbers. Each team is scheduled to play between 12 and 13 games this season, with fewer teams playing on the different fields at one time to limit the number of people at the park at one time.

On Wednesday, the Raiders fell short but the score didn’t matter as much as the fact kids were playing baseball.

“We have been hopeful all spring but we didn’t know what was going to happen,” Frey said. “We are excited to be playing.”