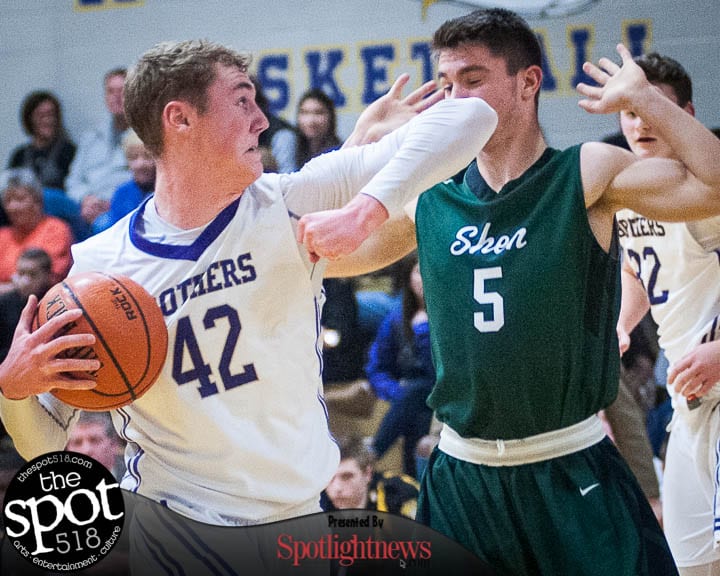 Shaker 65, Schenectady 64
This could be Shaker’s defining victory this season. The Blue Bison (5-2 league, 7-2 overall) built a 51-46 lead after three quarters of play in Schenectady’s home gym, saw it slip away with less than one minute left in regulation and had the wherewithal to come back and win it on Cam Germaine’s three-pointer with four seconds left (his only field goal of the game). Jake Cook dominated down low with 27 points, and Sloan Seymour — probably the biggest addition for Shaker — contributed 20 points. Tyrone Jenkins led Schenectady (7-1, 8-1) with 22 points, but Shaker’s ability to slow down John Ryals (11 points) was another factor that helped the Blue Bison pull off the win.

Shenendehowa 57, CBA 42
Schenectady’s loss leaves Shen (7-0, 7-0) as the last undefeated team standing in the Suburban Council. The defending Section 2 Class AA champs had little trouble with CBA (2-5, 2-8), as the Plainsmen bolted out to a 20-5 lead after the first quarter and kept on going. For a full recap and a photo gallery from that game, click here.

Colonie 67, Mohonasen 45
With a score like that, it’s hard to believe that Colonie actually trailed 12-7 after the first quarter, but the Garnet Raiders (5-2, 7-3) turned on the afterburners from there and outscored the Mighty Warriors 60-38. Brendan Mulson drained four three-pointers on his way to a 22-point night for Colonie, while Duncan Tallman paced Mohonasen (1-6, 2-7) with 18 points.

Guilderland 58, Burnt Hills-Ballston Lake 48
Guilderland (4-3, 5-4) overcame a tough first half to rally past Burnt Hills (1-7, 1-9). Kevin Greene scored 21 points for the Dutchmen, who outscored the Spartans 15-4 in the fourth quarter to complete the comeback from a five-point halftime deficit. Benjamin Keppler had 21 points for Burnt Hills.

Saratoga Springs 74, Troy 67 (OT)
If beating Schenectady on the road is Shaker’s defining win, then Saratoga’s overtime win at Troy could be the Blue Streaks’ defining win. Adam Anderson poured in 30 points, and AJ Lawton contributed 16 points to help Saratoga (6-2, 6-2) pull off the victory. Daniel Buie scored 19 points for Troy (4-3, 5-5), which rallied from a seven-point deficit to send the game to overtime.